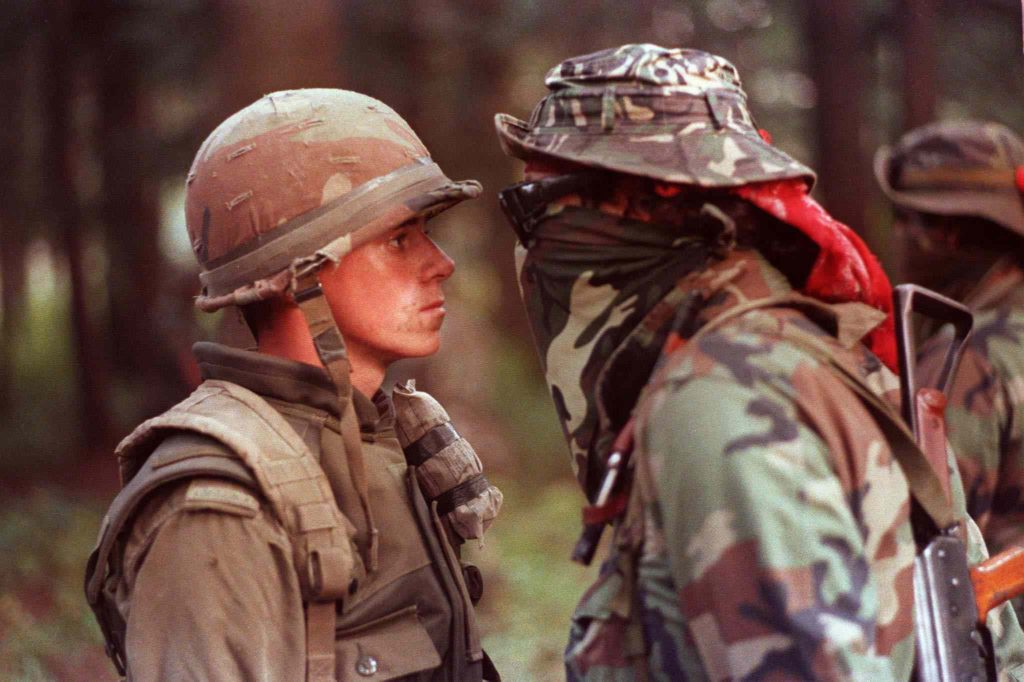 To mark the thirtieth anniversary of the Indigenous resistance by the Kanien’kehá:ka (Mohawk) Nation at Oka, Quebec, People’s Voice is reprinting this analysis from our predecessor, Canadian Tribune, in October 1990. We note that, while current PV policy is to use “Indigenous” instead of “Aboriginal,” the latter term was widely used in 1990.

The paraphrasing of Malcolm X’s famous declaration was not a threat of violence but a statement of fact: unless there is quick and genuine progress to recognize the fundamental existence of Aboriginal people in Canada, the events at Kanasatake and Kahnawake are doomed to repetition.

What really happened at Oka has fundamentally changed things. The log jam atmosphere of stalled and delayed negotiations, that followed failed first ministers’ conferences on the constitution and the exclusion of Aboriginal leaders from the Meech Lake process, was broken at Oka.

The dam has burst, and the river of Aboriginal politics is now flowing rapidly with a force that can no longer be contained by false promises. Whether this river leads to violence and confrontation or to overdue recognition of Aboriginal rights very much depends on government responses, the support of progressive movements and the internal politics of the First Nations.

On October 1 at a symposium on self-determination in Toronto, George Erasmus, leader of the Assembly of First Nations, expressed frustration and anger that, as Aboriginal people have become more unified and vocal in their demands, federal and provincial denial of Aboriginal rights remains stubbornly entrenched.

This denial is not only colonial but also ahistorical. In his address to the symposium Erasmus outlined the pre-colonial history of the Aboriginal peoples – how they existed as self-sufficient, self-governing nations with their own territories, treaties and trading relations.

Erasmus talked about the history of the Dene Nation of which he is a citizen, and how the various tribes, after years of infighting, finally “buried the hatchet” and came together as the Dene Nation with each community having representation in the greater body, the Assembly. The Dene then defined the extent of their territory – to the north there were long territorial wars with the Inuit until finally a peace treaty was signed and a place called Bloody Falls marked the border between the Inuit and the Dene Nation.

To the south the northward-expanding Cree Nation came in conflict with the Dene and after a similar conflict a treat was arrived at designating the “Peace” river as the border between the two nations. To this day few Cree live north of the Peace River and few Dene can be found south of it. Similar inter-nation wars, treaties and trading relations took place across North America – long before Cartier and Champlain were exploring the “New” old world – and they would continue into the period of colonization.

Aboriginal nations played a pivotal military and economic role in the two centuries following contact. It is only in the past 150 years or so that marginalization occurred. As First Nations’ economic power declined and immigration increased, First Nations were shunted to the periphery of Canadian society.

In his groundbreaking study of the early history of colonization, Natives and Newcomers, anthropologist Bruce Trigger discredits long-held theories that the Aboriginal nations were static societies before European arrival and that they were merely victims of colonization following contact.

Trigger’s research shows that the Aboriginal societies were active and conscious participants in the political and economic development that shaped North America and that Western perceptions of Aboriginal peoples have swayed from outright racism to complete romanticization – the “noble savage vs. bloodthirsty warrior” syndrome.

Both stereotypes are equally one-dimensional, as Trigger argues: “Very little attention is paid to how or why Native people had either friendly or hostile relations with Whites or to the problems that the coming of the Europeans posed for them. Even when [they] are lauded as natural ecologists … their way of life is still depicted as equivalent to that of Europeans in prehistoric times. Historians who seek to do justice to Native peoples frequently end of merely replacing unfavourable stereotypes with what White society regards as flattering ones.”

The political barriers are just as difficult to dispel, as Erasmus said in his symposium address. He concluded by stating that Aboriginal leaders are still having to deal with outdated nineteenth-century values and narrow legalist arguments from the state. He acknowledged the damage done to Aboriginal people through the Indian Act – how it imposed forms of government alien to processes that had developed and worked for thousands of years and how First Nations are today affected at different levels by the colonial mentality.

He admitted that present Aboriginal political structures do not “reflect ourselves as the nations we are” and the residue of the nineteenth-century colonial system remains entrenched within the First Nations.

There are compliant chiefs and band councils. In the lexicon of the federal government these are often called the “moderates.” The “radicals,” just as often, have become those who are following the traditional forms of government.

Language is a powerful weapon and it was wielded with skill by the state throughout the Mohawk crisis. Those defending their lands were called “criminals and terrorists” by politicians and bureaucrats. These characterizations filtered into the media and, finally, into the public consciousness.

By taking advantage of collaborators and those in the Mohawk Nation who give their own internal agendas priority even at a time of crisis, the state was quite successful at diffusing support for the Mohawks and at casting doubt on the validity of the cause. The tactics used – manipulating public opinion through the media, exploiting internal Mohawk divisions to discredit the warriors and, finally, calling in the army and censoring the press – met, when you consider the events of the summer, a rather muted voice of protest across the country.

The lesson that has likely been learned by the state is that the use of the army is both possible and potentially desirable in order to “resolve” conflicts.

There is another, somewhat more personal, side to the events of this summer and perhaps a lesson has been learned that simplistic responses cannot solve complicated things.

Five months before the Oka crisis this journalist wrote an “analysis” of the gambling wars at Akwesasne. Looking back at those articles I found the words I had used to describe the Warrior Society were identical to those the government would use during the height of the crisis at Kanasatake and Kahnawake.

I did not relish the similarity.

When I finally did meet some of the people I had earlier branded, they were defending the barricades and working 18 hours a day in emergency measures organizations. I had even more cause for regret.

Some of those “criminals and terrorists” have now become, for all intents and purposes, political prisoners.

Whatever their fate, the summer of 1990 has changed everything. The Mohawk crisis is likely to be the catalyst speeding the process of change and decolonization.

It is not surprising that it has emerged from a people whose sense of sovereignty, despite being surrounded by a dominant society for 400 years, is unwavering.

The author is a member of the Plains Cree First Nation. Reprinted from Canadian Tribune, October 8, 1990.