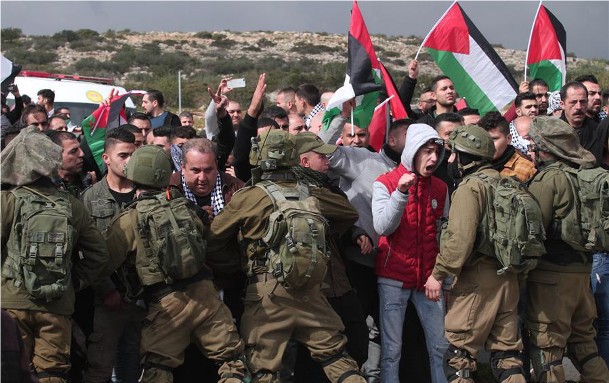 In a statement issued July 3, the Communist Party of Canada has condemned Israeli President Benjamin Netanyahu’s announcement that his government’s imposed deadline had been reached for its illegal annexation of the Palestinian territories of the West Bank and Jordan Valley.

“The Israeli annexation is completely illegal under international law and is an act of war against the Palestinian people whose land has been illegally occupied by Israeli troops and settlements over more than five decades,” stated the Communist Party. “The annexation is the main point in the Trump-Netanyahu ‘Deal of the Century,’ which has been rejected out of hand by the Palestinian people and by governments around the world that recognize it a provocation, an act of war and genocide.”

Despite numerous UN resolutions calling for the creation of a Palestinian state on the territory of the 1967 borders, with Jerusalem as the capital and with the right of return, successive Israeli governments have pursued a policy of unending war and aggression, driving Palestinians off their land and constructing illegal settlements.

The Israeli blockade around the besieged territory of Gaza means that Palestinian inhabitants have been denied access to water, food, medical supplies, employment and other necessities of life. This blockade is intended to compel Palestinian submission and extinguish Palestinian resistance and all hope of a Palestinian state.

The Communist Party notes that Canada is one of only a handful of countries that have not condemned the Trump-Netanyahu deal and the impending annexation. “Canada’s Minister of Foreign Affairs Francois-Philippe Champagne is still ‘studying’ these illegal acts of war by Israel and the US, while Palestinians prepare to defend themselves and the world looks on in horror.  It is the Trudeau government’s continuing subordination of Canada to US foreign policy on Israel, and its refusal to adopt an independent foreign policy of peace and disarmament, that cost Canada its bid for a seat on the Security Council last month, and that has made Canada a pariah on the world stage.”

The Party has long demanded that Canada develop an independent foreign policy of peace and disarmament. The Party says that such a move would include immediate and unilateral withdrawal from the NATO and NORAD military alliances, ending Canada’s involvement with US regime change operations against Venezuela, cutting military spending by 75 percent and enacting BDS (boycott, divestment and sanctions) against Israel.

“For peace in the Middle East, Canada must condemn US-Israeli annexation plans and demand implementation of UN resolutions leading to a Palestinian state, a territory within the 1967 borders, with its capital in Jerusalem and with the right of all Palestinians in exile to return. This is the path to peace which the Trudeau government needs to advocate now. The alternative is a renewed struggle of a people united with the will never to be defeated, and with the sympathy and support of the whole world.”