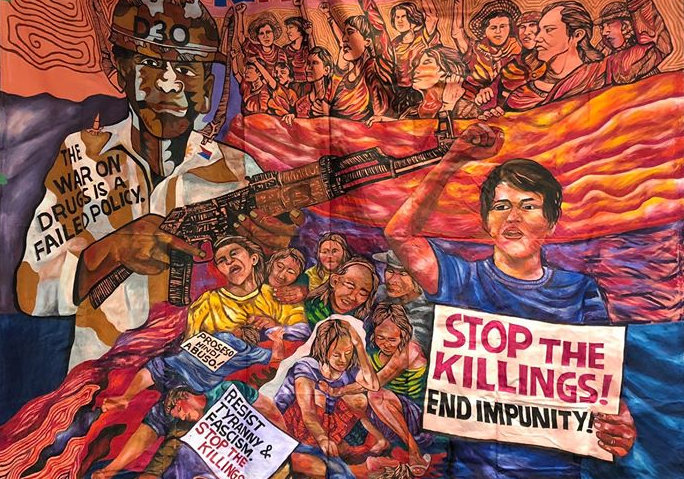 Critics of Philippine president Rodrigo Duterte’s government are renewing their condemnation of the regime in the wake of two recent events: the release of a United Nations Commission on Human Rights report on the abysmal state of human rights in the country, especially the deadly impact of the “war on drugs,” and the president’s push for a new anti-terror law that would give even greater powers to the police and military.

The International Council for Human Rights in the Philippines (ICHRP)-Canada has expressed concerns that the new law under debate in the Philippine Congress would allow longer detentions without charge, contrary to habeas corpus protections. The legislation includes provisions for warrantless arrests, and for 14-day detentions of suspected “terrorists.” It would create a so-called “anti-terror council” with authority to define terrorism and order arrests without a warrant, a function usually reserved for the courts.

The bill proposes 12 years of imprisonment for any person who “joins” designated “terrorist organisations or group(s)” as determined by the anti-terror council. The bill also provisions to impose penalties for wrongful detention, which would effectively allow impunity to the military and police to detain without fear of accountability.

Opposition voices warn that the government’s track record on vilifying political dissenters means that the new legislation would give it wide latitude to accuse people of terrorism.

Defence Secretary Delfin Lorenzana has responded that “the people need not fear,” because there were civil liberties “safeguards” in place. But the UN Human Rights report released on June 4 documents a culture of impunity in the police and military.

The UN report details the government’s focus on countering alleged national security threats and illegal drugs, using tactics such as killings, arbitrary detentions, and attacks on the right to dissent, as well as the problems of persistent impunity and huge barriers to accessing justice. The report was mandated by a July 2019 UN Human Rights Council resolution, after it became clear that long-standing human rights concerns have become more acute under the Duterte administration, in particular the killings of thousands of alleged drug suspects and the deaths of many human rights defenders over the past five years.

The report calls for independent, impartial and credible investigations into all allegations of violations of human rights and international humanitarian law.

Despite a long tradition of human rights advocacy and activism in the Philippines, the report says that human rights defenders have been subject to verbal and physical attacks, threats and legal harassment for nearly 20 years. Such attacks against perceived critics are “increasingly institutionalized and normalized in ways that will be very difficult to reverse.”

It highlights the tactic of “red-tagging” – labelling of individuals or groups as communists or terrorists. The escalating threats to freedom of expression include legal charges and prosecutions against journalists and politicians critical of the government, as well as actions to shut down media outlets.

The report examined the impact of national security laws and policies on human rights, particularly in the southern island of Mindanao and Negros Island, which have seen increased militarization and emergency measures. As the ICHRP-Canada says, “the effect of this militarization – coupled with the long-standing presence of armed groups and the pressure by powerful landed elites and large business projects – is particularly dire on already embattled indigenous and farming communities.”

ICHRP-Canada is calling for solidarity to oppose the attacks on human rights in the Philippines and for an end to all Canadian support to the Duterte government, including financial, socio-economic programming, tactical, logistical and training support, military sales and defense cooperation.