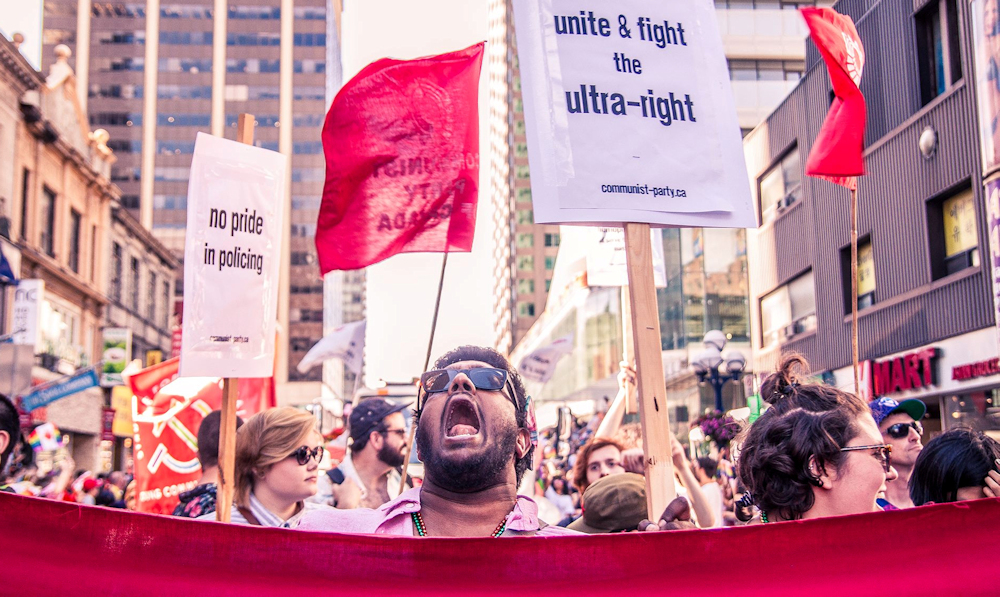 This year, Pride events and mobilizations across the country take place in profoundly difficult conditions, marked by the impact of the COVID-19 pandemic and deep economic crisis. The twin threats of the economic crisis and the pandemic are seriously weakening and destroying the social relationships and institutions of communities: the social spaces that bring the community together are closing, sometimes permanently. A recent country-wide survey indicated that the pandemic has had a disproportionate impact on 2S/LGBTiQ+ people. We have also seen the evaporation of services and supports, painstakingly built up over decades by dedicated community activists.

These challenges have intensified with an uptick in white supremacist and neo-fascist activity that supports homophobic and racist violence – and supported by police organizations prepared to impose control through violence. On the other hand, we see the emergence of a people’s resistance, nowhere more evident than in the Black Lives Matter uprisings against racism and police violence in the US, Canada and elsewhere.

It is noteworthy that movements and communities, including the 2S/LGBTiQ+, are joining black-led resistance to police violence. These are evidence of the possibility and urgent need for unity and solidarity in the struggle for a people’s recovery from pandemic and economic crisis. For the 2S/LGBTiQ+, this is a reminder of our own history and the debt we owe to black and brown activists like Marsha P. Johnson, an insurgent at Stonewall in 1969 and a founder of the contemporary Pride movement. Our struggle was born in the heat of a fight against homophobia and racism, and we continue to honour that history with our struggles today.

It continues today: on June 2 the NYPD viciously attacked 2S/LGBTiQ+ protesters attending a rally in Sheridan Square, near the Stonewall tavern; they were gathered to demand justice for the police murder of a black transman in Tallahassee Florida. His name was Tony McDade; on May 27, police gunned him down.

The most obvious impact of the pandemic is the need for strict physical distancing, which precludes the large public marches, rallies and parades that have been so important to Pride celebrations over many years. But behind this visible public effect, the pandemic has had a devastating effect on working people, including a particular impact on the 2S/LGBTiQ+ community.

Prior to the pandemic, the Queer community continued to struggle against deep-seeded social inequities in the health-care system – particularly from homophobia and transphobia, and denial service. Those challenges have magnified barriers for Queer people during the pandemic. These include the effects of compromised immune systems, higher rates of poor health due to impoverishment and exclusion, and reduced likelihood to have regular care or to a reluctance to seek urgent care due to homophobic and transphobic experiences with doctors. Queer people have experienced a sudden contraction of access to medical services, doctors, ER treatment, and mental health supports. In a context of neoliberal austerity, where health and hospital funding has been cut for several years, these additional risks are life-threatening.

We need unity and solidarity to win immediate increases for health and hospital funding during the pandemic and beyond, to ensure that all people have full access to the care they need. This includes funding for universal pharmacare, long-term care and mental health care. It also includes funding to restore and expand public health services and units.

Prisons, which have disproportionately high numbers of Indigenous, racialized and 2S/LGBTiQ+ inmates, also face severe impacts from the pandemic. With no ability to self-isolate and limited access to hygiene and sanitary products, the prison system is a guaranteed incubator for the spread of the virus. Many inmates are older people or have compromised immune systems, which increase the risk of major complications from COVID-19.

We need unity and solidarity to win the immediate release of non-violent prisoners, safe housing for those released, and increased health resources and protections for inmates who are still in confinement, including specific resources for 2S/LGBTiQ+ people.

Even before the pandemic, the global economy was teetering at the brink of a deep recession. COVID-19 has pushed it over the edge, throwing millions of people out of work and threatening their wages, pensions, housing and safety. Prompted by their powerful corporate allies, federal and provincial governments have committed tens of billions of dollars to propping up businesses and replacing lost profits, while offering only meager supports to working people.

This economic depression has a profound impact on 2S/LGBTiQ+ folk, who are far more likely to be low income or live in poverty. This is particularly serious for 2S/LGBTiQ+ youth, who comprise up to 40 percent of homeless youth in Canada.

Unemployment has rocketed to levels not seen since the Great Depression. Corporations and right-wing governments will be happy to see high unemployment continue after the pandemic, ensuring a large “reserve army of the unemployed and underemployed” to help drive wages down. In Ontario, Doug Ford’s Conservative government has used the economic crisis as cover to attack workers’ rights, by forming an advisory committee to instruct the labour relations board to deny refusals of unsafe work and by changing the rules for layoffs so that employers do not have to pay severance.

We need unity and solidarity to win increased Employment Insurance payments for all unemployed workers, for the duration of the crisis. We need to demand a full employment recovery, so that all workers have access to well-paid, full-time employment with benefits, as well as a universal public pension plan that provides a livable retirement income to all. We must also demand a federal housing program, recognizing housing as a right and ensuring that all people have access to safe, secure and affordable accommodation.

The murder of George Floyd by police in Minneapolis, and the resulting massive uprising against racist anti-Black police violence, are stark reminders of systemic oppression in our society and the brutality that the state is prepared to unleash in order to maintain it.

This occurs just a few months after the RCMP invaded Indigenous land in BC, to dismantle blockades that Wet’suwet’en people had erected on their own territory to stop pipeline construction. The calls from right-wing politicians and organizations in Canada, for increased police and military intervention, were echoed by Donald Trump’s recent statement, “when the looting starts, the shooting starts.”

The Queer community has its own stark experience with police brutality, crystallized in the raids on the Stonewall Inn in 1969 and the Toronto bathhouses in 1981, and in the uprisings that followed. Pride finds its foundations in the resistance to this brutality and oppression and is a celebration of the community’s resistance and solidarity.

We need unity and solidarity to win justice for George Floyd and all oppressed people who are victimized by police and state violence. This includes strong civilian oversight and control of the police, sharp reductions in police budgets in demilitarization of police forces, stronger enforcement and penalties for hate crimes and hate speech, and increased funding for anti-oppression and equity-seeking programs.

As capitalist crisis deepens, the world is becoming an increasingly dangerous place. Homophobia, transphobia, and other forms of hate continue to spread, dividing people and undermining resistance to a corporate recovery based on weak labour rights, social spending cuts, privatized healthcare, increased raw materials extraction and exports, and militarism. For the 2S/LGBTiQ+ community, the urgent imperative of the day is to unite in solidarity to demand a people’s recovery and defeat the corporate agenda that has increasingly authoritarian overtones.

For full equality rights and socialism!