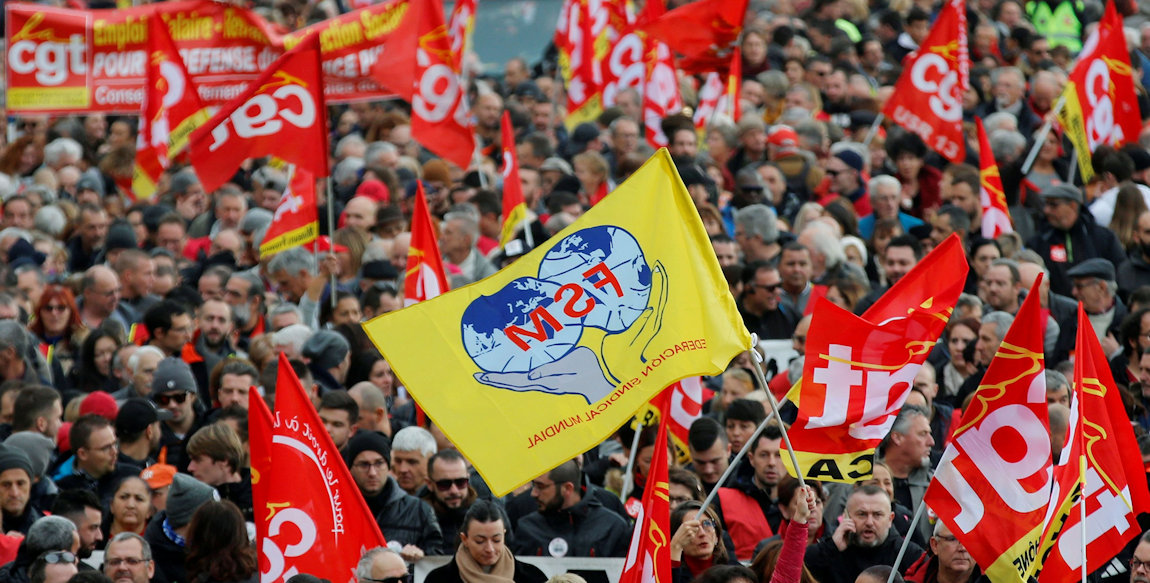 A few months ago, trade unionists in Canada would have expected to be emerging from a Canadian Labour Congress convention right now, hopefully pondering how to mobilize and implement an escalating action plan to combat neoliberal austerity, the climate crisis and the threat of war.

Understandably, the pandemic changed all that – the CLC convention is postponed and most workers are focused on more immediate concerns relating to the health crisis. One of the down sides to this is that the labour movement is missing out on a key opportunity for broad discussion and debate about working class demands and priorities for a recovery, as well as how to engage its millions of members in a campaign to achieve these goals.

In the absence of a convention, many workers will have welcomed the CLC’s “Labour Priorities for Economic Recovery” document, released May 13, which outlines Canadian unions’ proposals for a progressive response to the coronavirus-related crisis. The global economy, which was faltering even before the pandemic, has now been pushed over the edge and into a state of crisis not contemplated since the Great Depression. Two million people in Canada lost their jobs during the month of April alone and the official unemployment rate has more than doubled from a year ago, reaching 13 percent. Economists suggest that the actual unemployment figure is around 20 percent, meaning nearly 3.7 million people are out of work. Hopes for a quick “V-shaped” recovery have faded into obscurity, as it has become clear that deep economic crisis and mass unemployment may well continue long after the virus threat passes.

At the same time, the corporate sector is gearing up to make sure that the recovery will ensure and expand capital’s flexibility (through weakened labour and environmental regulations), consolidation and expansion, reduced taxes and increased profits. They want to repeat the experience of the 2008-09 financial meltdown, in which corporate profits needed only 15 months to recover and pass pre-crisis levels, helped along by neoliberal government policies.  By 2018, just ten years after that crisis, quarterly corporate profit had jumped nearly 100 percent and reached historic highs, while average hourly wages had increased by only 8 percent when adjusted for inflation.

Add to this scenario the ongoing climate crisis and threat of widespread environmental disaster, and it should be clear that the working class in Canada and globally has little choice but to organize a mass, militant resistance.

But if workers were expecting the CLC to provide them with a road map for advancing and winning radical reforms, they will be sadly disappointed. While it has some good proposals, “Labour Priorities for Economic Recovery” generally serves up a timid set of initiatives that suggest the CLC leadership will focus more on lobbying their friends in the Liberal government, than on mobilizing a mass struggle.

The document begins with the important call for full employment in well-paid productive jobs. It squarely rejects precarious employment, noting that it deepens gender and racial inequality, and calls for detailed equity-seeking plans within a full employment strategy.

However, the proposals stop well short of demanding an end to predatory, private employment agencies. These profitable companies are a key factor in the expansion of precarious employment, and they have been shown to reproduce gender and racial inequality in employment practices, which in turn replicates income disparities.

There is, notably, no discussion about the historic labour movement demand for a shorter work week with no loss in take-home pay. In the current context of technological development and increasing productivity, the working class call for shorter work time is both achievable and necessary.

While the CLC calls for increased public investment in infrastructure and expanded public services – and connects this to other commitments like accessibility and climate justice – it avoids taking a position that clearly opposes private sector involvement. Certainly, the labour movement opposes privatization of existing services and institutions; however, the CLC proposals waffle when it comes to where and how new projects and services will be developed. For example, the only reference to P3 (private-public partnership) projects is the recommendation that governments avoid “costly and wasteful” ones.

This absence is particularly conspicuous since the federal government is preparing to ramp up P3 infrastructure projects through its $35 billion Infrastructure Bank. The bank’s stated purpose is to “co-invest with private sector and institutional investors in new, revenue-generating infrastructure projects.” In this context especially, the labour movement needs to take a clear stand against P3s and instead demand full public ownership, operation and delivery of public infrastructure and services.

“Labour Priorities for Economic Recovery” does call for permanently higher wages but its proposals for increasing incomes are underwhelming. The treatment of a livable wage is limited to calling on the federal government to “develop plans for federal-provincial-territorial coordination to achieve a living minimum wage [including] plans to achieve paid sick leave and emergency leave.” Millions of workers are severely underpaid, and the labour movement simply must do more than ask the government to prepare some plans. The document does specifically call for improvements and enforcement around pay equity, which is crucial. However, it’s recommendation for minimum wages is limited to implementing a $15 federal minimum, with no demand for an actual livable wage (generally agreed to be around $20) or for improvements to provincial minimum wages, which affect far more workers in Canada.

Similarly, the proposals for unemployment and retirement incomes are tepid. One the one hand, the CLC is calling for expanded eligibility for Employment Insurance (EI); but it fails to advance the key demand for increased EI payments. On the question of pensions, the document notes that retirement savings have been diminished by the economic crisis and that many people have had to withdraw funds just to cope with their immediate needs. However, beyond suggestion an increase to the Guaranteed Income Supplement for low-income seniors, there is no mention whatsoever of the drastic need for a universal public pension plan – that is, through an expanded CPP and QPP – so that workers no longer need to rely on perilous private and individual schemes, and can retire with a guaranteed, livable pension income.

Some key demands for economic recovery are completely absent from the CLC document. For example, there is no discussion at all of plant closure legislation, let alone of public takeover and conversion and operation of plants like General Motors in Oshawa. (Instead, there is talk of how the government can use procurement policy to expand manufacturing.) Likewise, there is no mention of reducing Canada’s soaring military spending, as a key element for funding an economic recovery that is squarely in the interests of the working class and the climate.

Interestingly, the strongest proposals tend to be in those areas where the CLC has been actively campaigning. These include pharmacare, long-term care and childcare. The labour movement’s concrete engagement on these issues clearly translates into stronger demands for more radical reforms.

This raises what is perhaps the most important question about “Labour Priorities for Economic Recovery.” Is it intended to engage trade unions in a country-wide effort to strengthen mass struggle, or is it a document for lobbying governments? Given the absence of an action plan, and the proposal for class-collaborative and tripartite strategies, it seems the CLC has chosen the latter option.

And this is what makes the CLC’s approach so insufficient, so discouraging. Workers in Canada and around the world have never been able to rely on collaborationism and reformism to win and defend social gains. They have always had to struggle.

During the Great Depression, as the largest unions and labour federations froze, it was the Workers’ Unity League that spearheaded the key struggles and won victories in union organizing, strikes, wages and social reforms. This offers some lessons for the current and coming struggle. The WUL was organized within the labour movement but outside of the reformist organizations, and its orientation was clearly anti-monopoly and anti-imperialist.

In the current context, with so much of the labour movement dominated by social democratic ideology – often in its right-wing form – trade unionists and the working class as a whole need a structured left current within labour, focused on class struggle mobilization and committed to winning the centre over to the left. Militant, but not sectarian, such a current is essential building a fighting unity within the trade union movement and among the working class and its allies in general. More than any moment in recent history, this work is urgent. Because there will be no recovery for workers without class struggle.