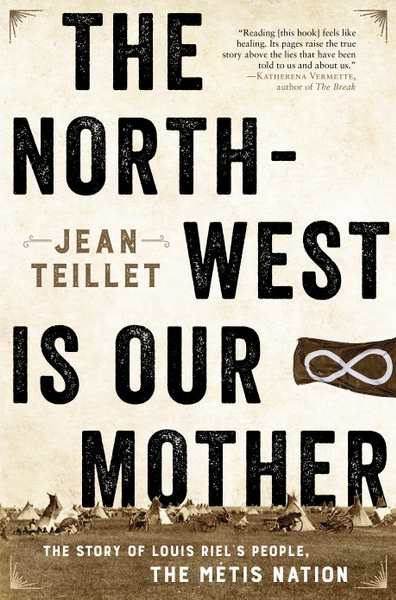 The North-West Is Our Mother

The development of nations often takes millennia, or at least centuries, a complicated process of forging a common language, culture, history and identity. But sometimes peoples are brought together in unique circumstances and acquire the features of a nation in a much shorter time.

The North-West is Our Mother, by historian Jean Teillet (a grand-niece of Loius Riel) is a highly readable and fully documented account of the Métis Nation, which arose in the Red River region of the southern prairies during the second half of the 18th century. Stepping onto the stage of history just a few decades later, the Métis had already created their own distinct language (Michif, borrowing from others), songs, symbols, economy, legal structures, governance and way of life. They forged alliances with Indigenous tribes and some of the settlers in their corner of the world, and they engaged in battles to defend their interests. Forced into a struggle for existence as a distinct, self-declared nation, the Mètis pushed back all attempts to assimilate them into the new capitalist power on the northern half of Turtle Island, gradually re-emerging as one of the nations formally (though incompletely) recognized in Canada’s constitutional structure.

In the 2016 Canadian census some 587,000 people, or 1.7% of the country’s population, identified as Métis. The author deals briefly with the related issue of “who are the Métis,” arguing that they are the descendants of the nation which formed in the Red River area – “Riel’s people” as we often call ourselves.

(My own ancestors include Salomon Hamelin, a prominent trader among the Métis of the southern prairies during the mid-1800s, and a member of the Council of Assiniboia.  Hamelin was among those who opposed Louis Riel, for reasons of self-interest explained in this book.)

Readers who know little about Métis history will find The North-West Is Our Mother an invaluable place to start. Teillet’s tour de force is comprehensive and detailed, but highly readable for those without much pre-existing knowledge beyond sketchy details about the voyageurs, the Hudson’s Bay Company, or the struggles in Red River (1869-70) or northern Saskatchewan (1885).

Since the ruling class definition of “nation” is usually restricted to citizens within the boundaries of a particular state, Teillet’s early chapters on the origins of the Métis are highly enlightening. The extension of the fur trade past the Great Lakes in the 1700s required a new labour force. Most of the young men hired to do this exhausting work came from the Trois-Rivières region of Québec. Far from home for months and even years at a time, their lives soon became centred on the North-West, working together with new comrades, starting families and becoming integrated into the Indigenous peoples of the region. In a remarkably short time, these men learned to cooperate in their collective self-interest, transitioning from their initial position as outsiders in the vast lands beyond Lake Superior, forming a distinct people, far from company headquarters or the heavy hand of the Church. By the late 1700s, many were permanent residents of the North-West, working in the fur trade, hunting for bison like their plains Indigenous neighbours, and entangled in the “fur trade wars.”

This brief era was interrupted in 1812 by the arrival of Lord Selkirk’s settlers – victims of the Highland Clearances in Scotland, sent to the Red River area in Rupert’s Land, the huge territory gifted to the Hudson’s Bay Company by the British Crown in 1670. It goes without saying that the actual residents were never consulted about this act.

Much of Teillet’s book deals with the following 70-plus years, as the Métis and Indigenous peoples were targets of perhaps the biggest single land theft in Canadian history. The Métis won some significant victories during these years, starting with the Battle of the Frog Plain in 1816 – a brief exchange of gunfire which ended with 20 of Selkirk’s colony members dead.

Many Canadians are aware of the 1869-70 struggle by the Red River Métis, led by Louis Riel, which resulted in the federal Manitoba Act that brought Manitoba into Confederation.

The next few years were a period of violent ethnic cleansing, as soldiers and Orange Order goons backed by Prime Minister John A. Macdonald terrorized both the French and English Métis of Red River. Many were murdered, shot, raped or burned out of their homes, an unofficial but very real campaign to drive the Métis off their lands. Riel himself was elected to Parliament three times, but never allowed to take his seat. All the promises made during the Red River Resistance were broken, along with Macdonald’s duplicitous guarantees of French-language rights. Finally, thousands of the Métis fled west and north, finding new areas to resume their way of life.

A decade later, Canada was pushing open the door for a massive wave of colonists (ironically including my European ancestors). The bison were gone, the CPR was bisecting the prairies, treaties had been signed to squeeze the Cree and other Indigenous nations into small chunks of land. There was no room for the Métis in this scheme to make the west a “white man’s country.” Riel and Gabriel Dumont led the heroic North-West Resistance to this second round of ethnic cleansing, only to lose their last stand at Batoche on the banks of the South Saskatchewan.

But Riel’s people refused to die. One of the most powerful parts of Teillet’s book is her account of how the lii vyeu (the “Old Wolves” who had survived the resistance movements) met in 1909 to launch a project to write the history of their people. The difficult task took until 1935, when the book was unveiled at a mass gathering of 2,000 Métis. The renaissance had begun, including the struggle for Métis settlements in Alberta, led by two Communists, Jim Brady and Malcolm Norris.

Putting nearly 300 years of history into less than 500 pages, Teillet’s book is a towering achievement. Find it at your local independent bookstore and start reading.