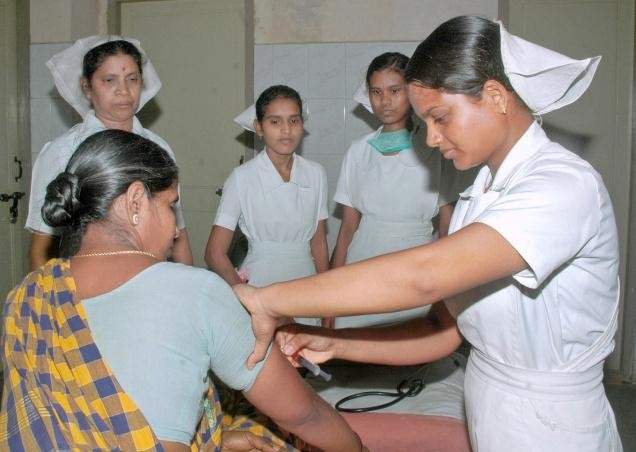 The coronavirus crisis is certainly bringing to light the key differences in health care infrastructure across the world – not only between the for-profit capitalist systems and the more needs-based socialist systems – but also between rich and poor countries (“developed” and “underdeveloped”). If we want to look past the self-referential, shallow explanations offered by the mainstream press (“not enough money”, “corruption”, “lack of expertise”, etc.), what are some concrete reasons for the discrepancies between these infrastructures?

By sharing a little physically-distanced backyard whiskey with my neighbours, I learned that amongst four households, we could count three nurses and an engineer, all from India. In Québec they work as truckers and childcare workers.

Already, Haitians in Montréal are suffering heavily at the hands of COVID, as they fulfill the demands of an essential yet undervalued sector of the economy: Préposées aux bénéficiaires (PAB), a type of nurse’s aide/personal support worker position specific to Québec’s healthcare system, that is chronically underpaid and overworked in long-term and elder care. The colonial mentality behind funneling Haitians (mostly women) into low-wage care work did not go unnoticed when workers started getting sick and dying.

Despite their repeatedly professed love of their country of origin, my neighbours felt they had to move to escape crushing poverty, even with the training that they had acquired. Walter Rodney, in his crucial book, How Europe Underdeveloped Africa, clearly lays out the mechanism of underdevelopment. He states that it is part of a relationship that cannot exist without “developed” countries maintaining their position through imperialism: outright theft, worker and resource exploitation, military intervention, and so on.

Underdevelopment is a position that imperialist countries like Canada intentionally maintain elsewhere, through a variety of mechanisms. The most egregious of which is regime change, which occurred in Haiti in 1991 and 2004, and is behind imperialism’s current escapades in Venezuela. Imperialism also relies on the International Monetary Fund, “free trade”, intellectual property laws and other mechanisms to do a lot of the heavy lifting. The political instability, structural poverty and lack of hope that are built into underdevelopment assure a steady stream of immigrant skilled workers, for whose education Canada has not spent a penny.

Many people are familiar with the concept of “brain drain”, wherein skilled workers leave poorer countries of origin to earn higher salaries in richer ones. This process deprives poorer countries of talented people – for example, of capable nurses at a time where health care workers are utterly critical. This was the experience of my neighbours, who left India. An added deficit is that they have not started to work as nurses yet, so are in jobs that many people refuse to do because of poor wages and working conditions.

India and Haiti both have healthcare systems that are deeply unequal, depending on the patient’s wealth. They are also in no shape to treat a pandemic, in terms of sheer treatment capacity. This situation is hardly surprising, when we consider how many of their health care workers are living and working in Canada and elsewhere in the West.

It is a vicious cycle. Poor countries need to be able to grow their own health care systems, in order to retain the needed skilled workers. But, if it pays better to work as a trucker in Canada than as a nurse in India or Haiti, there will continue to be Indian and Haitian nurses working as truckers in Canada. And there will continue to be people going without medical care in their home countries.

Immigration may be a deeply personal story, but it is also social and systemic. Canada makes sure that its immigration policies attract skilled labour most of all, while its foreign policy makes certain that these labourers face the false choice of poverty or migration. Migration then is a form of exploitation and theft at the expense of the people of poorer countries. Undoubtedly, we can count the casualties of the coronavirus in those countries as victims of imperialism and underdevelopment.