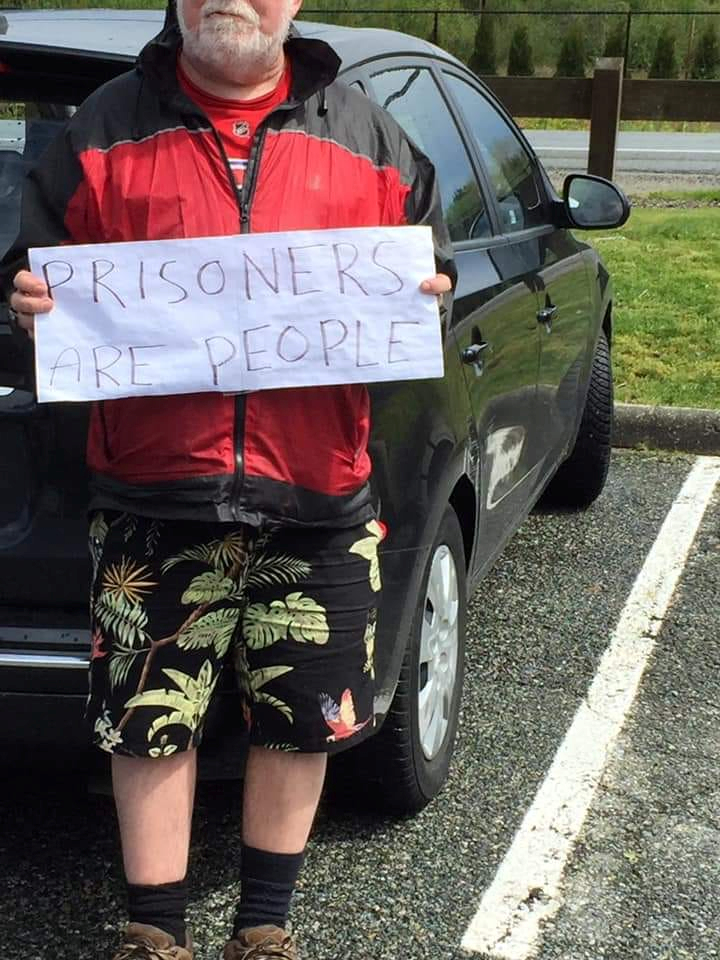 The rain was falling hard at noon on May 3, as cars slowly pulled into a deserted parking lot outside the municipal hall in Mission, BC. But within a few minutes, the skies began to clear, and ten vehicles drove a couple of hundred yards to the nearby Mission Institution, a medium-security jail which has been the site of the biggest COVID-19 prison outbreak in Canada. For an hour, protesters led by the Vancouver Prison Justice Day Committee honked horns and made noise outside the building which houses many of the infected prisoners and guards, who now total over 133.

There was no response at first, other than correctional guards filming, and absurdly warning us to stay away from the high, razor-wire topped fence separating the road from the building. Then windows began to crack open a few inches, enough for prisoners to wave a towel or a shirt, or to bang something on the outside wall in response to our noise. Finally, some began to call out, “thank you,” “help us”, “we’re dying in here.”

It was an emotional scene, to say the least. Imagine what it must be like inside those cells, locked down almost around the clock for weeks, while authorities have done little to protect inmates or guards. Here in British Columbia, the worst impacts of COVID-19 have been at long-term senior care homes, poultry processing plants where most of the workers are from immigrant communities, and in the penitentiary system where inmates are largely from Indigenous or racialized backgrounds. This province is widely seen – with some justification – as having handled the pandemic better than most places in North America, but these sections of the population certainly didn’t benefit.

The Vancouver Prison Justice Day Committee and other groups argue that a prison sentence should not include exposure to a potentially fatal disease. They call for urgent steps to improve care for all prisoners – broader testing, improved PPE, better treatment for those who fall ill. But there are also growing demands for the immediate release of detainees to ensure adequate physical distancing and quarantine measures. The Committee says that released inmates should be assisted to self-isolate safely, or to quarantine with community supports in place for rehabilitation.

“We need to release people into communities in a safe and just way that services the prisoners themselves and the people who have been impacted by their harm,” one spokesperson told the media.

Across Canada, as of May 2, 290 federal inmates had been infected with COVID-19 and 155 have recovered. There were 41 active cases among correctional officers, from a total of 84 who have tested positive since the pandemic began, according to the Union of Canadian Correctional Officers.

As concerns grew about those numbers, the Correctional Service of Canada began attempts to limit the spread of the virus. Actions included medical isolation of staff and inmates who show symptoms or test positive, distribution of masks, enhanced cleaning protocols and the installation of new hand-washing stations. At the Mission Institution, nurses were eventually provided at the site around the clock, and physician coverage every day. But these measures were not taken during early stages of the pandemic. It took until late April to complete testing of all inmates at the Mission jail.

After the death of a Mission inmate on April 15, over forty social justice and prison rights organizations issued a call for an immediate inquest into the situation.

On April 21, a COVID-positive prisoner at Joliette Institute in Quebec filed a proposed class-action lawsuit against Correctional Service Canada’s handling of the pandemic. On April 23, the CSC said it was “conducting an analysis of the offender population” so it could make release recommendations.

Public Safety Minister Bill Blair, responsible for federal prisons, says that “literally hundreds” of inmates have been released. A recent Vice article by journalist Justin Ling quotes Blair saying that he has personally instructed both the federal prisons system and the national parole board to “to use their authorities to facilitate the release of inmates.”

Ling’s research indicates a recent decline in the number of inmates held in provincial and territorial prisons – a drop of about 4,363 from a normal daily average of about 24,355 prisoners in these jurisdictions. In part, this may reflect a slowdown in the legal system during the pandemic.

In the federal system, however, the decline is much smaller, just 275 out of about 14,000 in those jails on a regular daily basis. The Parole Board of Canada says it is trying to streamline processes and speed up decisions, for example by allowing parolees to move home instead of to a halfway house.

But Ling’s article reports that it’s not that simple. In fact, some parole board changes have actually made it harder for inmates to be released. “Elder-assisted hearings,” designed to give Indigenous communities a role in advising the parole board regarding Indigenous inmates, have been cancelled during the health crisis, for example. The board has also “cancelled all temporary absence applications until further notice, except those that are medically necessary.”

In contrast, some provinces have told inmates who were being released on temporary absence permits to go home and remain under house arrest, at least until the end of the pandemic.