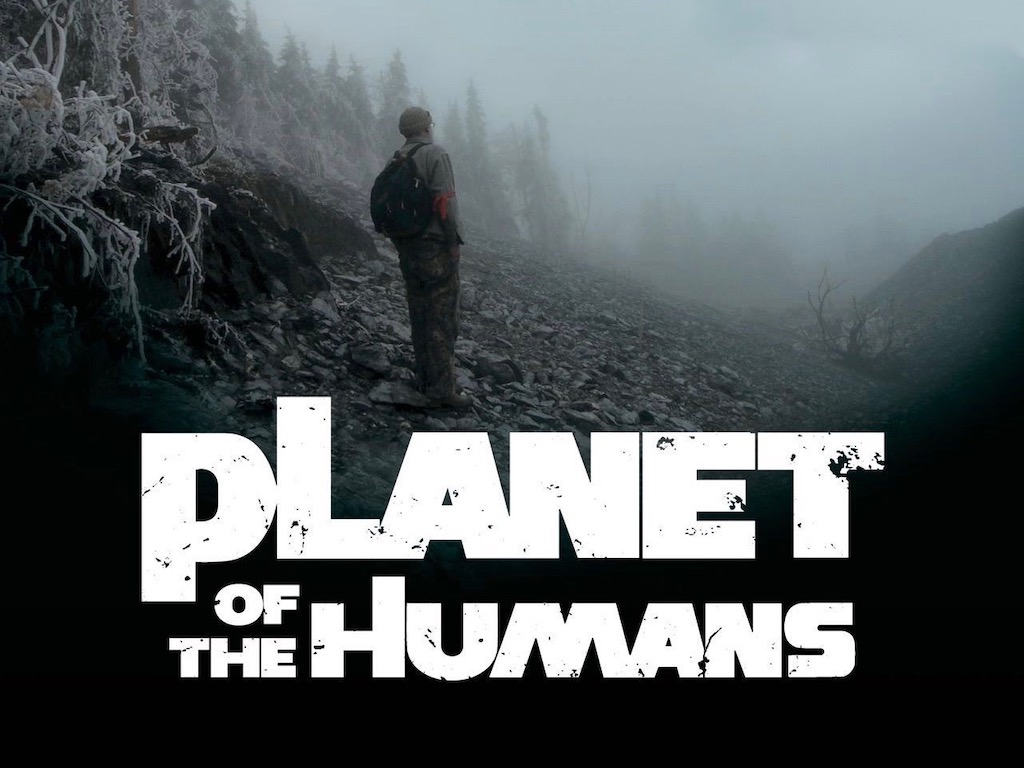 Written and Directed by Jeff Gibbs

April 2020 was the 50th anniversary of Earth Day, and environmentalist all around the world marked this date in special ways. To celebrate, Michael Moore (Roger and Me, Bowling for Columbine) a YouTube release of his film about the environmental movement, Planet of the Humans, written and directed by Jeff Gibbs.

The production has been controversial with some progressives upset, but the left should generally be celebrating this movie rather than panning it. Planet of the Humans repudiates much of the information and claims that the pro-capitalist “green” movement has held dear for a long time. Gibbs and Moore offer a critique of the “cancer” (their word) that is the current and dominant form of green capitalism. At its best, the film documents how much of the environmentalist movement has been completely taken over by capitalism. For example, Goldman Sachs has invested somewhere between $40 to 50 trillion in “green” technologies – that fact alone should be an early indicator that all may not be what it seems.

The film also notes that mainstream environmentalist organizations have received massive funding from fossil fuel-based mega-corporations. Even the definition of “green” energy has been applied to projects and practices that should never have been considered environmentally sound in the first place. The film, as well as positive reviews of it, have made a lot of readers and activists upset – but perhaps we need to be upset with the answers we have lived with for a very long time.

Planet of the Humans begins by pointing out that scientists around the world have known about the phenomenon of catastrophic climate change since the 1950s, and argues we are “addicted to fossil fuels.” The election of Barack Obama was considered a real victory for the green movement, and his administration included substantial investment in the “Clean Energy Revolution.” For some time, there has been a strong movement advocating the end of coal-based energy production. Mainstream groups such as the Sierra Club and 350 have been big players in this effort – the Sierra Club’s website even allows people to purchase electric cars and solar panels for their home. If only we could move away from coal and other fossil fuels, the argument goes, we will have a healthier planet. Much of the liberal “left” in the US has taken such a green “revolution” to heart and are celebrating the shift away from gasoline; even General Motors and Tesla have cashed in on this and have developed electric cars.

The problem exposed in the film, however, is that electric cars need to be powered by the existing electrical system. So, in moving away from gasoline we are increasing the use of the coal-fueled electric grid. Further, batteries used in electric cars require extensive lithium mining. The film doesn’t mention this, but it is worth remembering the Bolivian coup in 2019, which was partly based on securing corporate (rather than state) control of lithium mining in that country.

Gibbs and Moore also examine the use of solar-panels for energy production, to replace coal. Lansing, Michigan, has an array of solar panels the size of a football field. Surprisingly, however, workers there indicate that the project will only power ten houses in the community. Furthermore, when solar panels are not receiving energy from the sun, they need to be supplemented through back-up batteries – but these batteries are often not plugged into sustainable technology. Solar plants themselves have to be powered in order to initiate production, so for most facilities there still is a reliance on natural gas. Durability is also a consideration, as most solar panels need to be replaced every ten years.

Another area of concern, which the filmmakers argue the environmental movement does not always publicize, involves the impact of solar plants on their immediate surroundings. When corporations look for sites to host mass solar arrays, they often choose deserts. But deserts themselves are delicate ecosystems that host a range of flora and fauna – that life that is sustained by the desert is destroyed by the solar plants.

The film also addresses the promotion of biofuel as an alternative to gasoline, noting that this uses massive amounts of grain. Consequently, biofuel production means diverting food away from hungry people.

One of the best and most surprising aspects of Planet of the Humans is its exposure of how forestry corporations have embraced the biomass element of green capitalism. Biomass refers to the use, in energy plants, of non-coal sourced fuels. This includes energy projects that burn wood chips (read: lumber) and has contributed to mass deforestation in Brazil and in parts of North America. Sections of the green movement have embraced biomass instead of coal – even if it means clear-cutting forests. Around the world, deforestation has meant the loss of Indigenous lands.

One of the biggest promoters of bio-fuels is Richard Branson, founder of the huge Virgin Group transnational corporation. Planet of the Humans shows Branson to be one of the most prominent backers of turning lumber into jet fuel. But instead of challenging his cynical ways, many environmentalists celebrate him.

In response to investors who want to use an “ethical screen,” financial companies have created mutual funds that avoid fossil fuel industries or invest in non-fossil fuel energy. The film portrays many of these corporations as cynically looking for an “ethical” cover for their traditional practices. Former US Vice President Al Gore, who was a key lobbyist for biofuel and biomass technology, is shown to be personally benefitting from this area of investment activity.

For Gibbs and Moore, the very definition of “green technology” is an illusion – or even a delusion! They show, for example, that “alternative” sources of energy for which the city of Detroit receives green credits includes a garbage incinerator. It is true that mainstream or liberal environmentalist organizations have no consistent position on what constitutes alternative technology, and this is clearly very problematic. But the movie takes the important step of documenting how some of these organizations have a material interest in promoting green capitalism. It shows, for example, that the very corporations behind biomass technology are major funders of the Sierra Club.

There are key criticisms that need to be made of Planet of the Humans. First, while it deals with the limitations of green capitalism, it doesn’t explore the actions of more radical or community-based organizations such as Greenpeace or the Sea Shepherd Society. Perhaps this is an indication that these organizations have not yet been co-opted by billionaires. The film also tends toward a Malthusian view that overpopulation and overconsumption are major environmental problems. Marxists have consistently warned that policies rooted in concerns about overpopulation tend toward what could be termed eco-imperialism or even eco-fascism.

Ultimately, the film would be better if it articulated a real way out. If the answer is not green capitalism, then what about eco-socialism? The film leaves us hanging. It is one thing to condemn the mainstream green movement, but it would be much better to embrace a class-based, socialist response to the environmental problems facing our world.