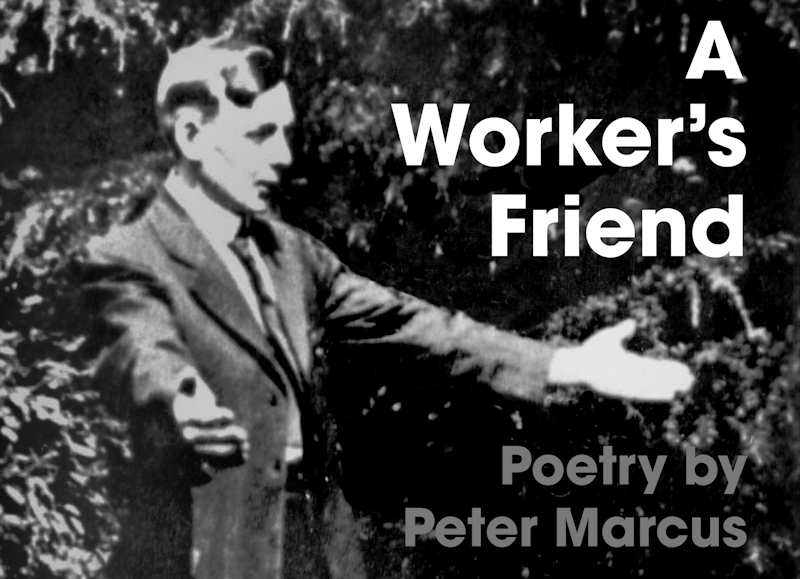 “Poetry is a reflection of the society in which we live and its past and its political future,” writes Peter Marcus in the introduction to his book of poetry, A Worker’s Friend. Guided by this understanding, Marcus serves up a collection of writing that speaks to the complex range of working class experience in Canada.

A retired health worker who was active for many years in the Hospital Employee’s Union in BC, Marcus grew up in Toronto before moving to Vancouver in 1966. He’s known in labour and left circles as “the Punning People’s Poet.”

A Worker’s Friend is arranged chronologically, and while most of the poems are from the last 5 years, it provides a memorable chronicle of progressive struggles and issues over the past few decades. Readers will enjoy several “aha!” moments while sharing in Marcus’ reflections about the 1991 Gulf War (“War Toys”), the 2008 financial meltdown (“Window of Opportunity”), Israeli apartheid (“Hollow Cast”) or the US blockade against Cuba (“Boxed In”). Some will, no doubt, have to suppress a grin or a tear (or both) when reading tender odes to working class heroes now gone, like “Ode to Bill Samchyk” and “To Bruce Yorke.”

Marcus writes that word play and alliteration are among his favourite poetic techniques, and both are well used in this collection. Throughout the book, word play, with its juxtaposed meaning and double entendre, reflects the contradictions in capitalist society. After all, one person’s riches are another’s poverty, so discussions about justice, peace and progress are all real-life games of wit, often tragically so.

“Barbecue” uses word play to compare labour relations to the sacrifice at a feast: Burgers free for the taking / But burghers take our freedom. / It’s all cooked. “Pipeline to Power” uses the same technique to expose the corporate interests intimately involved with oil policy: They excel / in finding key stones, / work in a kinder morgue, / a bitter end bridge, / spill a tanker. And in “The Fall of October” the poet plays with the political and personal, reminding us that they are always intertwined: storming the Winter Palace / for a peace / of land and bread, / hammer and sickle. / A red star / to replace a tsar / and business as usual.

In “Cacophony” Marcus makes use of hard alliteration to reflect the disjointed, sometimes jarring conversation the fills a coffee bar. But it also points to the unsettling effect of mass media in general, in which individuals are bombarded into numbness and become disengaged from the same public discourse that surrounds them.

“Have You Heard?” is a poem about this newspaper, which Marcus has helped to build and grow. It presents the working class press as nourishment for the class struggle: Ingredients put together / on the table / as a socialist buffet / to a world / more palatable.

There are also some personal reflections. “The Doorbell Rang” is Marcus’ remembrance of his childhood living above his father’s cycle shop in Toronto’s east end. It’s complete with references to neighbourhood institutions, events and characters that “ring a bell” and remind us of the interconnectedness of the communities in which we live and work.

A Worker’s Friend is a testament to the artistic, creative and expressive aspects of working class life. It is a fun read, and one in which we can find ourselves.