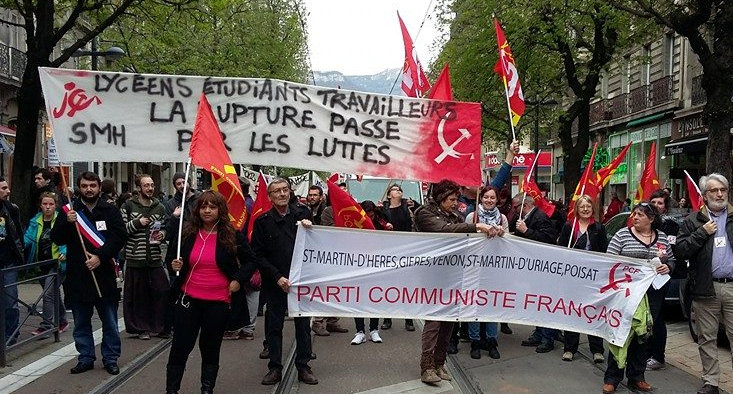 “Our victory stems from our daily activism”

France has a long tradition of electing communists locally. As Georges Marchais noted in his 1980 book L’espoir au present (Hope in the Present), “The French Communist Party has 28,000 elected officials, 1500 mayors, nearly 500 councillors. One in five French people live in a communist-controlled municipality.”

Forty years later the French Communist Party (PCF) has certainly faded, especially after the counter-revolution in Eastern Europe and the USSR. Still, even today several “red cities” remain, particularly in the working-class suburbs around urban centers. These centers of power, which elude the bourgeois parties, are commonly called the “red belts.” The tradition of communist municipalities is so strong that it is sometimes crudely identified as “municipal communism.” Some town halls have been run by the PCF since the 1920s (the Parisian suburb of Malakoff is a notable example) but the history of most of these red cities began with the Liberation in 1945.

This is the case in St-Martin d’Hères, a suburb in Grenoble’s “red belt” where, in the first round of the municipal elections on March 15, the Communist list was voted in with more than 53 percent support. For 75 years, the inhabitants of this working-class suburb have put their confidence in the Communists as the best defenders of social progress. This victory is all the sweeter since the opposition lists all hoped to end 75 years of municipal communism in St-Martin-d’Hères.

To get a deeper understanding of this victory, I contacted longtime friend and comrade Diana Kdouh, a young municipal councillor for the Communist majority in St-Martin-d’Hères.

Right away, she stressed that the PCF success was primarily the result of day-to-day work on the ground by local communists – leafletting, rallies, public meetings, banquets – as opposed to electoralism. “The door-to-door work we did was focused on specific municipal policies,” she said.

“The key issue in the campaign,” she added, “was to project our program for a quality public service that meets people’s expectations and needs […] at the municipal level and sometimes even beyond that.”

During municipal elections, the political forces that have power at the national level were challenged to establish themselves locally. Emmanuel Macron’s La République En Marche (LREM) party did not even exist three years ago, and these elections were a referendum on his government’s policy. It’s a referendum which, according to preliminary results (the second round has been canceled due to the COVID-19 pandemic), seems to have ended in failure for Macron and LREM.

In St-Martin-d’Hères, Macron’s anti-social policies, particularly his pension reform, were clearly rejected. The LREM list obtained only 15 percent of the vote. “Although [his] vote count should not be overlooked, Macron’s challenge in St-Martin d’Hères was not successful. Our vanguard is making sure of it!”

It’s the same story for the Rassemblement national (heir to the Le Pens’ Front national) which has the wind in its sails overall, including in some municipalities in the region like Échirolles where it has 20 percent support. But in St-Martin, not only is there no Rassemblement list, but their activists are completely unwelcomed in the red city. As Kdouh remarked, “where the communists defend class positions on a daily basis, there is no room for the far right.”

The first round of municipal elections saw the lowest voter participation since the 5th Republic was formed, at just over 44 percent. Obviously, holding the vote at the beginning of the COVID-19 pandemic discouraged many people from voting. Kdouh noted that even long-standing PCF supporters did not mobilize. However, it would be wrong to believe that this low turnout is due solely to COVID-19. “Abstention reached record levels even before the pandemic, if we look at the presidential and legislative elections,” said Kdouh. “The dominant ideology’s attitudes of resignation and fatalism have become well-established.”

She emphasized that her role as an elected communist had nothing to do with municipal management or administration. For her, and for the Communists, “the municipal level like any other […] must be a foothold, a platform from which we advance our struggles and demands.”

In other words, the primary responsibility of elected Communists is to use their position to strengthen the struggle of the masses against their exploiters. With this view, elected communists have never hesitated to leap from their Senate or council seats in order to block bailiffs coming to evict workers from their homes. Nor have they hesitated to march at the front of demonstrations in their politicians’ tricolor sash.

However, it would be wrong to view a communist municipality as an oasis of socialism in a sea of ​​capitalism – far from it. Certainly, elected communists work to improve the living and working conditions of the people. But the fact remains that the conquest of power by the working class cannot be reduced to the conquest of different levels of governance, as we often hear.

If there is one point on which Kdouh insists, it is that elections must be a means of strengthening daily struggles, not the other way around. The class struggle comes before the struggle for seats.