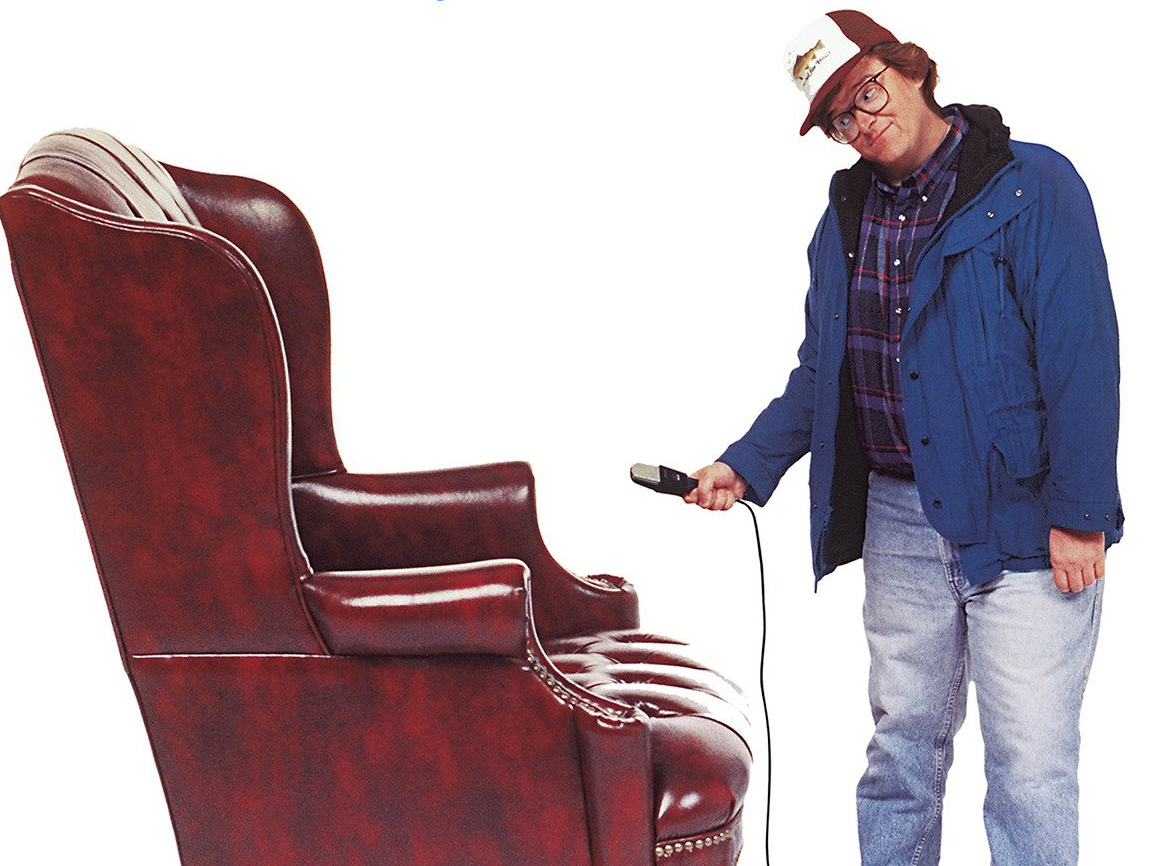 Michael Moore is an amazing documentary filmmaker whose work, such as Bowling for Columbine (2002) and Fahrenheit 9/11 (2004), has inspired viewers around the world. His first celebrated documentary was Roger and Me, released in 1989 and celebrated on the Left as a fantastic anti-capitalist film. Given the present crisis around COVID-19, it’s definitely worth a second look; re-examining this film allows some political discussion about its relevance to today’s issues.

Roger and Me is a documentary about what happened to the town of Flint, Michigan after General Motors’ 1988 decision to close its local automobile factories. Approximately 30,000 workers were laid off by GM at that time and, as a result, Flint quickly looked as if a giant bomb had hit. The very factory that GM closed was the site of the famous 1936-37 “sit-down-strike” which led to the formation of the United Autoworkers Workers (UAW).

In the film, Moore tries to secure an interview with Roger Smith, then the CEO of GM, which proves to be very difficult. The same year the plants closed Smith made a $2 million bonus and he refused to go to Flint, although many community members had asked him to. Moore clearly makes the point that corporations such as GM do not feel any gratitude or obligation to support the local community or their workers who were responsible for their profit margin. In the case of Flint, a once thriving community quickly became the “unemployment capital of the country.”

The film reveals the absence of leadership and militancy on the part of UAW. Instead of building resistance against the layoffs, the union did nothing to stop the plant closures. When Moore asks UAW leaders about the value of another militant strike, similar to 1936, the response he receives is that such an action will not change anything. Instead, the union agrees with GM in suggesting that laid-off workers can find work as correctional officers in the newly built jail, where they become literal jailers of their fellow workers who are now imprisoned.

Roger and Me also portrays the response of the business community to the mass layoffs. Many of the wealthy people interviewed reflect an attitude that industrial workers are “lazy,” and a common response is that workers ought to show initiative and start their own business. One scene shows a laid-off worker running her own business selling Amway products, a corporation that also began in Michigan. While such initiatives might help certain individuals, it is difficult to imagine that this could be a realistic option for 30,000 people, especially in a relatively small city. Some folks are shown selling their blood at the local clinic.

One occupation is revealed to be recession-proof. It seems the most secure person is the local sheriff whose job is to physically evict people who were unable to pay their rent or mortgage. One evicted family was only one month behind in rent; they are ejected on Christmas Eve and even their Christmas tree is forcibly removed.

The film also chronicles some bizarre – and useless – government responses. At one point, public funds are used to build a massive new hotel, with the goal of attracting tourists and conventions. The hotel soon closes due to lack of business.

What does Flint look like today? After 1988, the town lost one half of its residents and the community is still very much affected by unemployment. The enduring financial crisis prompted the city to change its drinking water source to save money, which caused the Flint Water Crisis. This public health crisis, which began in 2014 and continues today, exposed over 100,000 people to lead contamination. The toxic water caused an outbreak of Legionnaires’ disease, which killed 12 people. Flint residents are still unable to drink their tap water, an untenable situation that has upset people throughout the community.

One criticism of Roger and Me is its failure to explore the issue of international solidarity. The film mentions that GM closed eleven US plants in the United States in 1988 and, the same year, opened the same number in Mexico where is pays workers a mere fraction of the wages for autoworkers in the US or Canada. But instead of building solidarity with Mexican workers to collectively fight GM, the film shows workers fighting the purchase of cars manufactured outside the US. Mexican workers are symbolically seen as some sort of replacement worker or “scab.” Workers need to criticize GM, not other workers, as the corporation seeks greater profit by cynically pitting workers of different countries against one another.

Twenty-five years after Moore’s film was made, David Menzies from the far-right Rebel Media travelled to Flint as a follow-up. In his short film Flint Michigan Uncovered, Menzies shows some level of praise for Roger and Me (in a right-wing populist way) but argues that the layoffs happened because the unions were too powerful. Of course, the opposite is true. The film also calls Moore out for not living in Flint himself.

Today’s reality sees a steep decline in industrial manufacturing in Canada and the United States. More and more, greater amounts of capital are being concentrated in fewer hands. With the rise of Donald Trump and other right-wing governments across North America, including several provincial governments in Canada, corporations are receiving increased tax cuts from government. They don’t use this capital to increase salaries or invest in local communities but are building factories and farms all over the world, in an attempt to minimize labour cost.

In response, we need a much more militant labour movement, based on internationalist workers’ solidarity with those at home and abroad, so all workers across the world will have decent jobs and equally enjoy democratic rule on the job.