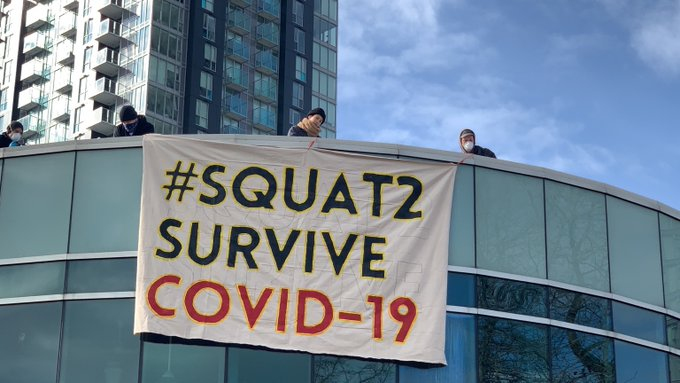 For many years, the Pivot Legal Society has been a prominent voice for people facing human rights challenges in Vancouver’s Downtown Eastside neighbourhood. The group says that today, “in these trying times, Pivot has been re-evaluating our work and where we can be the most useful during COVID-19.”

A recent statement from Pivot says, “The people we serve and work alongside have been facing overlapping emergencies for decades. Amid a housing shortage, toxic drug supply, and rampant violations of sex workers’ rights, COVID-19 adds another fatal layer of consequences to a landscape rife with injustice. The communities we serve are rapidly becoming the accepted collateral damage of the pandemic as they are left profoundly and structurally vulnerable absent an adequate social safety net.

“Self-isolation is impossible without a house or if you share a bathroom with 20 people in a single room occupancy (“SRO”) building. Without a safe and regulated supply of drugs unsupervised withdrawal and drug poisoning will continue to rise. People whose income is not legally recognized (and not eligible for Employment Insurance) will be forced to forgo self-isolation and continue to work in unsafe conditions. At the same time, police are exacerbating the problem, continuing to over-police the Downtown Eastside (“DTES”) and forcing informal economies, dangerously, further underground.

“Though devastating, COVID-19 has been illuminating. The government’s rapid response to this pandemic (compared with its sluggish response to a 3-years-old opioid crisis) puts into stark relief where its priorities lie and don’t lie. Our community has been told for years that governments are doing everything they can to address injustice (all the while dismissing calls for housing, a rent freeze, safe supply, etc.), and its rapid, aggressive, and unified response to COVID-19 reminds us that this simply isn’t the case. The silver lining is that progress is happening. Over the last few weeks in British Columbia, we have seen an eviction ban, rent freeze, and improvements to safe supply. The door is ajar; now we need to push!”

Pivot is campaigning for a number of new and updated policy changes to tackle the crisis, including:

Pivot urges people to respect health protocols and stay home if they can, but also to find ways to show solidarity with health care workers and with all those who cannot self-isolate to protect themselves because of systemic barriers. The group’s website (www.pivotlegal.org) lists important organizations in the DTES which need support at this critical time.