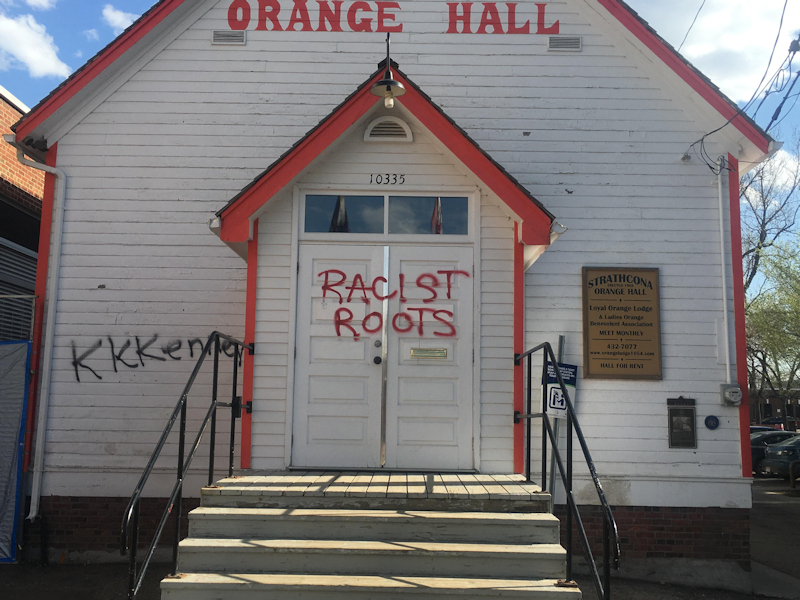 Many progressive folks living in Canada consider the historical legacy of Protestant-based community organizations to be a positive one. As examples of this progressive legacy, they often point to Tommy Douglas, the first social-democratic premier of Saskatchewan and Joey Smallwood, the first premier of Newfoundland and Labrador who spoke positively of Mao Zedong and the birth of the Peoples’ Republic of China in 1949.

Both men were also prominent members of the Grand Orange Lodge of British America (sometimes called the Orange Order), whose membership also included John A. Macdonald, John Diefenbaker and other prominent Canadian business leaders. It is important, particularly for progressive folks in Canada, to closely assess the history of the Orange Lodge.

The Orange tradition has its origins in the Loyalist (pro-Protestant and pro-British) movement in the UK. They are followers of William of Orange, and they use July 12 as an annual commemoration of the Battle of the Boyne in 1690. This battle was, and still is, seen as emblematic of Protestant ascendancy and power. Soon afterwards, “Orangemen” marches were held to mark this victory against Catholics and Catholicism. Marches deliberately intimidate and provoke Catholic communities by parading through their neighbourhoods.  These demonstrations have inspired later reactionary organizations such as Pegida, which attempts to march close to mosques, and the Ku Klux Klan, whose marches try to intimidate Black communities. In all these gatherings, we see privileged people trying to maintain their power.

Orange Lodges have existed in Canada since the War of 1812. From its inception, the Lodge explicitly opposed immigration to Canada of Catholic or racialized people. Notably, Lodge membership was predominantly made up of industrial workers. Despite this, many business deals were made at the Lodge, and many Orangemen were granted a level of class mobility in a way that would ordinarily be denied to them. Many Protestant workers joined because of the benevolent work that they felt they needed: in Newfoundland, for example, the Order founded the Fisherman’s Protective Union (FPU) in 1903. This point helps to understand the appeal of the Orange Lodge to the so-called “white working class.”

The Order had a long relationship with the military, including control over the volunteer militia and the exclusive use of “legitimate violence” in Toronto during the mid to late 1800s. Lodge members brutally suppressed the Upper Canada Rebellion in 1837, as well as the Métis people during the Red River Resistance of 1869-70 and the North-West Rebellion of 1885. At the Order’s height in 1942, 16 out of 23 members of Toronto City Council were Orange Lodge members. As immigration from non-Anglo-Saxon countries grew in the 1920s and 1930s, there was a parallel rise in racism, xenophobia and anti-Catholic sentiment. Many members felt that the “British way of life” was threatened – a view that still finds reflection in several contemporary debates. In New Brunswick, Orange marches led to anti-Catholic riots. As fears were stoked, there was a membership increase in both the Orange Order and the Ku Klux Klan; the two groups had a great deal of mutual membership and a similar world-view, and in some cases they actually marched together.

With the advent of the welfare state after the Second World War, Lodge membership in Canada declined. People who joined due to a desire to obtain social benefits realized that their membership was not necessary, and Canadian society was becoming less sectarian.

Why should progressives be concerned with an organization that is currently very small? An examination of its legacy is crucial to those currently fighting against racism and bigotry. Much of Canada’s founding mythology needs to be explored, and the notion that this is a democratic and peaceful society with a proud, progressive legacy needs to be unpacked. Many of the people who are identified as “founders” of this country belonged to an organization based on White Anglo-Saxon Protestant (WASP) ascendancy and privilege. Such a narrowly-defined identity considers itself to be deeply challenged by non-WASP immigration, and the Orange Order was explicitly against Muslim immigrants and others from non-Protestant Christian religious or cultural backgrounds.

Building a welcoming, inclusive and democratic society means critically exploring the legacy of the dominant culture (including its religious element) and social and political heritage. Only then can true solidarity begin.