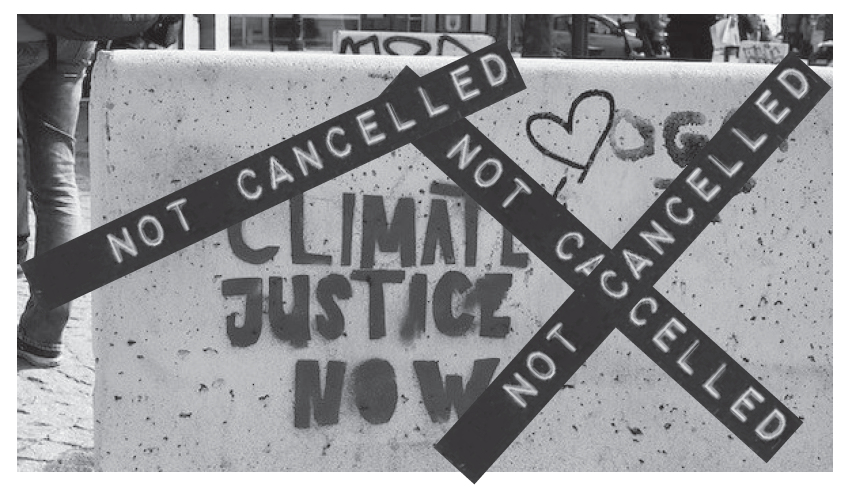 Social distancing is a reality for most people right now, but that doesn’t mean that collective action stops. Whether it’s tenants fighting against pressure from landlords, women campaigning for pay equity or workers resisting corporate profiteering, people have quickly begun to shift their activism online during the coronavirus pandemic. In the process, they are developing new and effective means for outreach, education and engagement.

Such is the case with Fridays for Future and the struggle for climate justice. The organization has held weekly rallies, pickets, vigils and banner drops in communities across the country, to push the demand for climate action to the centre of public view and discourse. They have also connected the climate crisis with politics of colonialism, racism and xenophobia, austerity and neoliberalism, and have mobilized to publicly support the struggles of Indigenous peoples, migrants and racialized people, students, poor people and others. The ability of groups like Fridays for Future to organize large public gatherings, particularly those that are linked to global days of actions, has forced the mainstream corporate media to take notice and provide coverage of the movement (if not all of the demands) for climate justice.

The coronavirus has put all that public work on hold. But it hasn’t suspended the climate crisis or the urgency of demanding decisive government intervention to confront it. That urgency has propelled Fridays for Future to rapidly transition its regular campaigning to online platforms.

Kendall Mar is an organizer with Fridays for Future – Toronto. Speaking to People’s Voice, she said the group is going ahead with its planned climate action on April 3. “It will be an online rally that will try to replicate the events we’ve had at Queen’s Park. So, we will still have speakers, music and chants.”

Mar notes that, while it can be harder to keep people engaged at an online event (“they have distractions and can logout”), the format also allows for different types of collective action. “We’ve sometimes asked people at physical rallies to take out their phones and send mass tweets or other messages. But this doesn’t always work well at a large rally because cell service becomes pretty poor, so you don’t actually get that big “blast” that you expect. We think this kind of action could be more effective in an online rally.”

Fewer people are expected to participate in the April 3 action than in previous ones – Mar notes that the September action in Canada was a week after those in Europe, so there was a ripple effect – but the online format may allow for different groups of people to become active in different ways. People who have difficulty getting to a physical rally, for example, may find it easier to participate in an online event. It may also be more attractive to new activists. “For many people, Fridays for Future is their first time at a rally or protest, and it can be really intimidating,” says Mar. She notes that youth, who tend to be the most engaged group on climate issues, don’t often know what to expect at a demonstration and are often intimidated. Providing different points of entry to collective action is a way to build the movement.

And that’s the other important aspect of Fridays for Future’s approach to the challenge of activism with social distancing – using it as a way to expand outreach and organization, so that the campaign will be even stronger after the pandemic. In Mar’s words, the goal is “to bridge the two, the physical and the online.”

With that goal in mind, Fridays for Future has organized online “artbuilds” in which participants learn how to make banners and signs using paint or silkscreen. They are also preparing several workshops to deepen public awareness of the issues; these include labour and a just transition for workers, Indigenous sovereignty and resistance, and what a “Green New Deal” looks like.

An online focus also allows for more concrete cooperation and networking between groups in different areas. The Toronto organization is reaching out to other Fridays for Future groups, especially smaller ones throughout Ontario, with a view to creating organizational hubs that can deepen coordination and strengthen local activity.

When the coronavirus pandemic passes – and it will – the labour and progressive movements will be called upon to fight hard against a “corporate recovery” that puts profits before people’s needs and the environment. Through creativity, commitment and hard work, the movement for climate justice appears ready to hit the ground running.