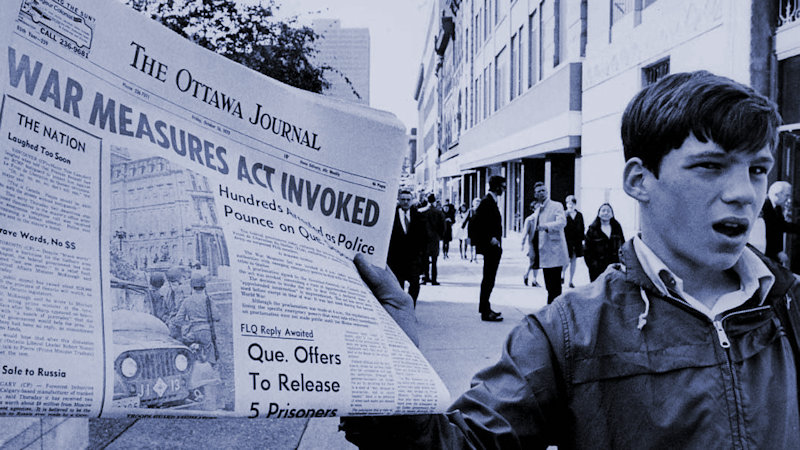 On March 23, Justin Trudeau held a meeting with all premiers to discuss whether or not to implement the federal Emergencies Act. As this issue of People’s Voice goes to press, he is stating that he will hold off for the time being.

Without question, the coronavirus pandemic is an emergency that warrants urgent and extraordinary action by governments. But it is unclear what powers the federal is reaching for when it looks to the Emergencies Act, or what impact those powers could have on the working class. After all, every provincial and territorial government in the country has already declared some type of emergency, so the main challenge right now seems to be ensuring consistency and improving coordination between those jurisdictions.

The Emergencies Act was introduced in 1988 to replace the War Measures Act, which had become severely tarnished following its use in October 1970. At that time, the government of Pierre Trudeau used the emergency powers to create a virtual police state – not just in Quebec, but across the country – in which 3000 searches were carried out and 500 people arrested and detained without charges or access to legal counsel. The widespread militarization of society and sweeping suspension of civil and democratic rights was described as “unprecedented,” and had the (desired) effect of putting a chill on support for Quebec sovereignty, as well as on radical political organizing throughout Canada.

The current legislation differs from the War Measures Act in that it requires Parliament to review a Cabinet decision to declare an emergency and makes temporary laws declared under the Act to be subject to the Charter of Rights and Freedoms.

It all sounds very transparent, safe, and reasonable. So, what could go wrong?

The Emergencies Act empowers the federal government to prohibit travel, forcefully evacuate or remove people, requisition property and penalize people who disobey emergency measures. The Act allows for summary convictions with a fine of $500 and 6 months in jail, or convictions on indictment with fines of $5000 and 5 years in jail.

A big part of the current crisis is the deep global economic recession that the virus has triggered. As in the 2008 financial crisis, the federal government is already kowtowing to corporate interests, particularly in the oil and gas sector. The Trudeau government is highly vulnerable to pressure from the right-wing premiers in Alberta and Saskatchewan and has already indicated its commitment to prioritizing Canada’s “petro-economy” at all costs. Ottawa will undoubtedly, commit huge resources to propping up the oil industry and removing all barriers to its post-pandemic expansion.

Perhaps the main barrier is opposition to pipelines and tar sands development, from Indigenous people and their allies right across the country. There is no question that politicians and oil industry executives have pondered this reality and addressed it in their plans for a “corporate recovery.” And it is not at all unthinkable that the federal government would be prepared to use emergency powers of requisition, removal and prosecution to ensure such a recovery. Trudeau and company have already shown their willingness to sacrifice “reconciliation” and “sunny climate action” on the altar of corporate profit. If they’re prepared to send the RCMP to dismantle an anti-pipeline blockade after only a couple of weeks, what is their limit now?

When asked how far he was prepared to go in October 1970, Pierre Trudeau replied, “Just watch me.” People watched, and they suffered. Hopefully, the labour and progressive movements have learned a thing or two since then, and they’ll organize now to defend the working class and oppressed people against the same kind of tyranny.

This is no time to watch and wait.