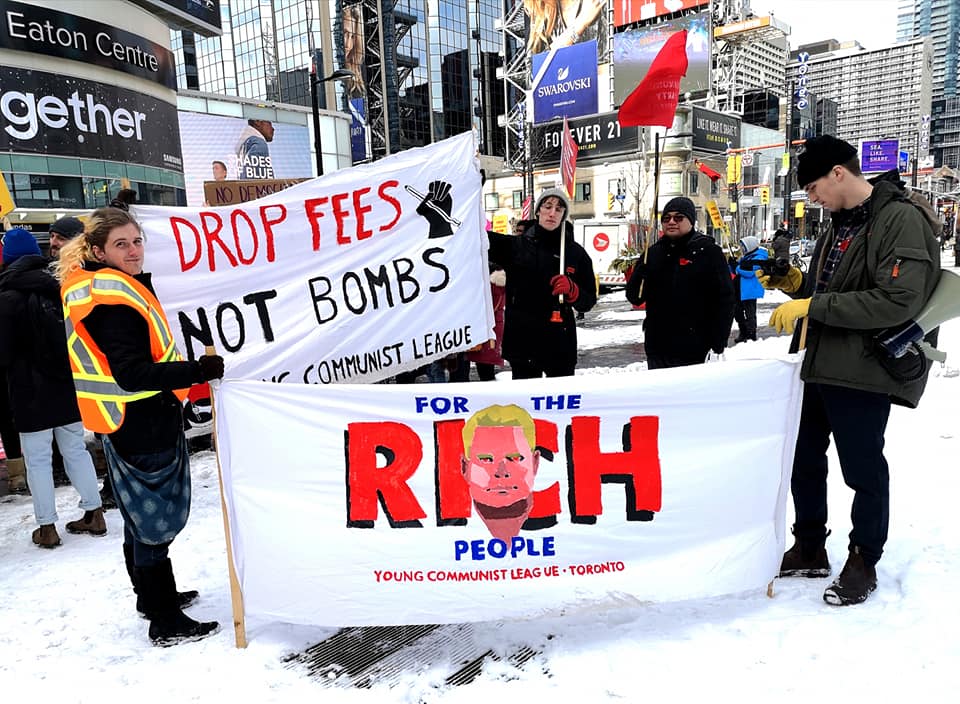 On January 24 Ryerson University in Toronto broke its 1986 operating agreement with the Ryerson Students’ Union (RSU). The university’s justification was that a new operating agreement had not been finalized, following allegations of improper use of RSU funds by members of the 2018-2019 Executive. This is a thinly veiled excuse to attack the democratic rights of students. The RSU remained actively engaged in negotiations with the university to enter into a new operating agreement and remains willing to make concessions, but not at the risk of jeopardizing their autonomy and ability to effectively advocate for students. The union was in fact hours away from sending over a new draft of the agreement when they received the university’s statement terminating the agreement and derecognizing the RSU as representing students on campus. The RSU nonetheless provided the university with a draft agreement the same day.

Ryerson has been withholding RSU dues since before they breached the operating agreement. The administration argues that the union has not met conditions set out in January 2019, including sharing the results of a forensic audit. On January 21, the RSU indicated that the findings of their financial review would be released to the membership at the Semi-Annual General Meeting on February 3. Clearly, the university is not acting in good faith, as its termination notice came just weeks before the RSU’s scheduled elections. Ryerson has also attempt to intervene with the electoral process by encouraging students to form a separate student union.

This blatant attack on democracy has been widely condemned. The Canadian Federation of Students, representing over half a million post-secondary students, has urged Ryerson to reverse their decision. The Continuing Education Student Association of Ryerson, representing over 16,000 continuing education and part-time students, will continue to recognize the RSU and has expressed their disapproval of the university’s attack. Ontario Federation of Labour Vice-President Janice Folk-Dawson said, “Any decisions about the fate of student unions must be done through the proper democratic channels, rather than through a unilateral decision that silences the voices of students.”

Shamefully, the University of Toronto Student Union (UTSU) Board of Directors immediately moved to end all relations with the RSU. This maneuver not only undermines the democratic rights of Ryerson students but also members of UTSU, who have a Special General Meeting in February where the membership should decide themselves whether or not to recognize the RSU.

How did we get here?

In 2015 the RSU eliminated the Executive Director of Communications and Outreach (EDCO) position. In the process they fired Gilary Massa, a unionized worker who was on maternity leave at the time. This move was part of the ‘corporatization’ of the RSU that was overseen by former right-wing lobbyists from Western University and the Ontario Undergraduate Student Alliance, a right-wing movement opposed to the CFS. The EDCO position was replaced by a non-union general manager who would be responsible for all of the RSU’s finances.

In May 2018, on its first day in office, a newly elected RSU executive fired the general manager and split the operation’s credit card into two $10 000 monthly limit cards – one for the RSU President and the other for its VP Operations. From that point until January 2019 no receipts for credit card purchases were provided and the RSU Executive failed to meet their constitutionally mandated requirement of Quarterly Financial Reports.

At a retreat on May 27, 2018, the RSU directors and executive passed unanimous motions, behind closed doors, to increase the annual salaries of the executive members by $11,000 (a 30.5% increase), raise the semesterly honorariums for executive members by $500, and expand the financial authority of each executive member by $3500. These motions were initially put forward to the RSU’s 2018 AGM but could not be passed due to lack of quorum.

On January 22, 2019 the Eyeopener, Ryerson’s independent student newspaper, published a story alleging misconduct and violations of RSU policy and by-laws by the executive. Pressured by the student body and the independent student press, the RSU acted swiftly and suspended the President and VP Operations. Since then four out of six executives have left office, with the VP Equity, VP Marketing and VP Education resigning and the VP Operations being impeached.

In May 2019, a newly elected RSU executive implemented procedures and a new governance structure to ensure good financial management. These include eliminating all executive RSU credit cards (which from the onset violated RSU policy), hiring a full time executive director to oversee day-to-day operations and hiring a full time controller to ensure financial oversight. RSU’s policies were updated to include a new oversight committee that ensures executives are accountable to RSU’s members.

The RSU retained PricewaterhouseCoopers to do a forensic audit and is in the process of finalizing a report which includes the results of the internal investigation and a detailed description of actions that have been taken this year to ensure financial accountability. The report will be shared with the university as well as RSU’s membership at the Semi-Annual General Meeting taking place February 3. As a result of their findings, the RSU filed a report with the Toronto Police Service, whose review is ongoing. The RSU has also filed a Statement of Claim with the Ontario Superior Court of Justice against the breach of contract by Ryerson University.

Is there a way forward?

Ryerson’s attack on student democracy comes at a time when the student movement in Ontario is being bludgeoned by the provincial government. Faced with the Conservatives’ “free speech” policy, which protects hate speech on campus, and “Student Choice Initiative,” which makes student union dues voluntary and is currently before the courts, it is an accomplishment in itself that the RSU is going forward with their elections and Semi-Annual General Meeting.

The whole fiasco is a symptom of the broader crisis in the student movement in English-speaking Canada. Student unions are not governing bodies and should have no interest in collaborating with corporate driven board of governors and administrators. The basis of student unionism should be the struggle for increased student rights. When this principle has been adopted by unions the student movement has been at its strongest – its most internationalist, its most united, and its most combative. This is the way for student unions to build a united, strong and militant movement, as in the 2012 Quebec student strike, that will echo the voices of hundreds of thousands of students who are ready to fight for their right to free education.

There is a battle of ideas that needs to be fought inside the student movement, alongside advancing unity in action. The movement needs to connect immediate student demands with other labour and peoples’ movements, to forge an alliance that will fight to curb corporate power and eventually overthrow capitalism. This is what students need and what many students are looking for. Many students, who on average finish their post-secondary education nearly $30,000 in debt, understand that capitalism is leading to crises, war and environmental destruction. Students do not need more campus services outsourced to “student governments.” What they need are organizations built on struggle, mass mobilizations and unity in action.