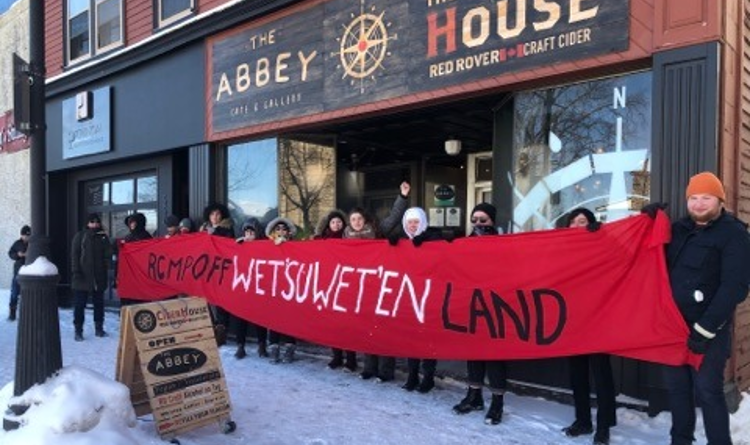 On Friday, February 14, dozens of activists gathered at Fredericton’s city hall in support of the Wet’suwet’en people, whose land is being invaded and stolen. Activists then marched to Westmorland Street Bridge where they received huge support from drivers and passersby.

The expression of allyship of working-class people in Fredericton defending Indigenous rights and fighting against big oil was remarkable, with activists continually chanting “Reconciliation, not invasion!” and “No more coal, no more oil; keep that carbon in the soil!”

This was not an isolated event – support for the Wet’suwet’en people has reached across Canada. On the same day as the Fredericton rally, there were more demonstrations in other areas: approximately 60 protesters of the proposed Coastal GasLink pipeline marched in Edmonton, dozens occupied a major intersection in Toronto, and blockades continue across the country at government legislatures and major rail crossings.

Additionally, the UN has urged the Canadian state “to freeze present and future approval of large-scale development projects affecting Indigenous peoples that do not enjoy free, prior and informed consent from all Indigenous peoples affected.”

Despite this, the federal government continues to use the RCMP to force through the construction of the pipeline. Dozens of people have been already arrested, and more continue to be arrested as this invasion unfolds.

I spoke with Emma Johnson, an Extinction Rebellion activist who organized the Fredericton protest, for her thoughts.

What makes this issue so important?

Emma: “It is important because the UN Committee on the Elimination of Racial Discrimination has specifically called on the federal government to immediately suspend work on the Coastal GasLink pipeline, the Trans Mountain pipeline, and the Site C dam until ‘free, prior and informed consent’ is obtained from Indigenous peoples. The issue is at an intersection of environmental issues and Indigenous rights.”

What were your goals for the rally?

“Mostly to raise awareness. People need to see that this issue is not being forgotten, and that may take two or more consecutive actions. My second goal was to get people writing letters. We need to flood the mailboxes of governmental officials over and over again with the same message: this specific use of force is a violation of Indigenous rights.”

How can working-class people help?

“Letter writing is good. Talking to people is better. Sitting down with someone, reading the letter I wrote together, seeing if they agree and then sending it together. Doing that over and over again with different people will help spread it faster than Facebook ever could. Other than that, they can always join an action and follow the leadership of Indigenous activists in their area.”

Her final thought: “I think that if you are passionate about environmental activism, then your best bet is to simply follow leadership of the people who are always on the front lines – Indigenous people.”