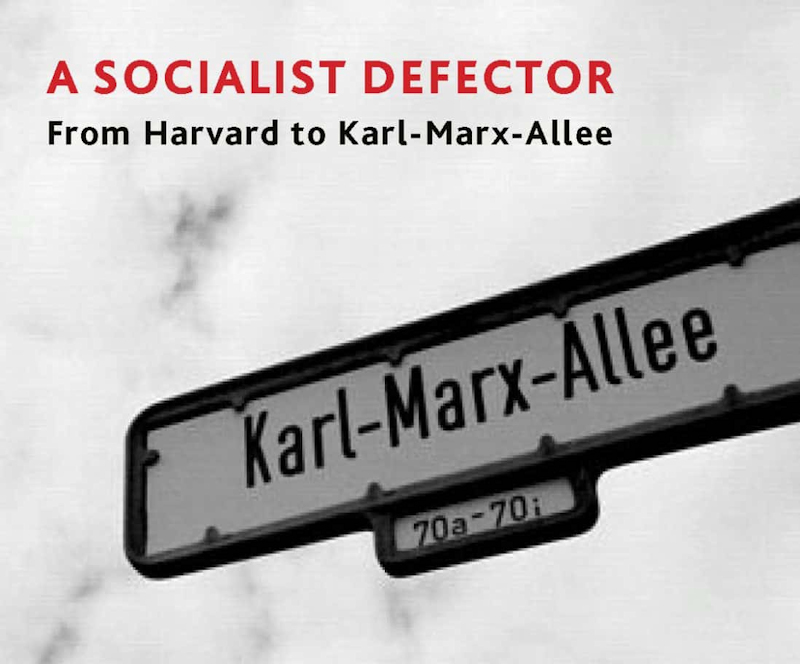 A Socialist Defector: from Harvard to Karl-Marx-Allee

Thirty one years ago the Berlin Wall came down and the working class in the German Democratic Republic (GDR), or East Germany, voted to merge with capitalist West Germany. In “A Socialist Defector: from Harvard to Karl-Marx-Allee” veteran journalist Victor Grossman provides insight into why the GDR’s 41 year experiment with socialism did not last. He describes the ups and downs of the former GDR, spicing it up with many interesting details of life before and after the Berlin Wall.

Grossman, an American, is in a unique position to comment on events in the former GDR. In 1951, he was drafted into the US army. He lied to recruiters about his long list of leftwing associations, including membership in the CPUSA. When he was sent to Germany, authorities found out that he had not told them the truth and ordered him to go before a military judge. To avoid a $10,000 fine and 5 years in prison, he defected to the GDR and continued to live in eastern Germany even after the Berlin Wall came down in 1990. Grossman trained in journalism and worked for the GDR media until 1990. He continues to write for the international communist press.

Despite being smaller with fewer natural resources and industry than its western counterpart, the ruling Socialist Unity Party (SEP) government, with no help from outside, turned the GDR into an economic powerhouse and eliminated poverty. Initially the economy thrived and living standards surpassed those of the Soviet Union, with full employment, cheap housing, free healthcare and education, adequate food and a growing supply of consumer goods. Women gained full equality and control over their lives, in contrast to West Germany where women needed their husband’s permission to work outside the home until 1977.

In the late 1970s, government efforts to build an electronics industry, maintain a large army and keep prices low for food and housing meant reduced investment to produce consumer goods. The Soviet Union raised oil and gas prices without offering more money for East German imports, further straining the economy. The top party leadership “feared” speaking openly about the country’s economic problem and how to deal with them.

Grossman notes that one of the GDR’s greatest failures was its lack of freedom of speech. The SEP did not allow open debate about problems and criticism of government policies, which it viewed as helping the enemy on the other side of the wall. Though the party leadership tolerated dissident groups outside the SEP, at times it exiled vocal critics from the GDR. The leadership did not trust the population which “was an important factor in the GDR’s decline,” writes Grossman.

He is also highly critical of the GDR’s weak democracy, in which the only electoral option was the SEP and its five party coalition partners. The only way citizens could influence the government was through its legal obligation to respond to written complaints and many injustices were resolved. However, to its credit the SEP coalition government did respond to demands from society, leading to the legalization of homosexuality in 1968 and abortion in 1972, and many other improvements.

Sadly, despite the SEP’s social and economic achievements, many East Germans, especially the young, took for granted their cradle-to-grave economic security and, bombarded by rosy images from West German television, believed that life was better in West Germany under capitalism. The US invested heavily in economically building up West Germany to make life seem less appealing in the GDR and lure people west.

The leadership’s unwillingness to publicly address the country’s economic problems, restrictions on freedom of speech, its mistrust of the population, the lack of democracy and the widespread belief that life was better in West Germany helped undermine support for the SEP and socialism in the GDR.

Grossman does not explore if democracy existed in the factories and workplaces. Did workers participate in production and management decisions or were all decisions made by management appointed by central planners? Did they feel that they were the true owners of the country’s publicly owned economy? Exploring these questions can also help understand why many workers came to reject GDR style socialism.

East Germans never expected the disaster that would unfold when they voted for reunification in 1990. The new Christian Democrat government wasted no time in selling off the GDR’s 8,000 publicly owned companies. Many companies, including high-tech factories, were sold for a song and then shut down because West German firms did not want new competitors. Many workers lost their and social benefits and came to regret the GDR’s demise.

Grossman also explains why the Berlin Wall was built in 1961. US cold warriors always used it to demonstrate alleged communist inhumanity. During the 1950s, West Germany along with the US tried to undermine the steady economic progress and improving standard of living in the GDR. Their tactics ranged from incentives to lure engineers and technicians to the west, to the imposition of a separate currency, to acts of industrial sabotage and terrorism. The West German spy organization — composed of former SS and Gestapo members — and the CIA even tried to place poisoned food in supermarkets to kill Soviet soldiers, a plot foiled by the East German security agency (Stasi). At the same time, there were heightened military tensions between US and Soviet forces in Berlin, accelerating immigration from the east. All these factors led GDR leaders to order the construction of the Berlin Wall in 1961 to save the country from disintegrating.

“A Socialist Defector” allows us to honestly assess and extract useful lessons from the GDR in going beyond capitalism. Grossman’s compelling, entertaining and passionate book is recommended for those wanting to know why socialism did not endure in the GDR.