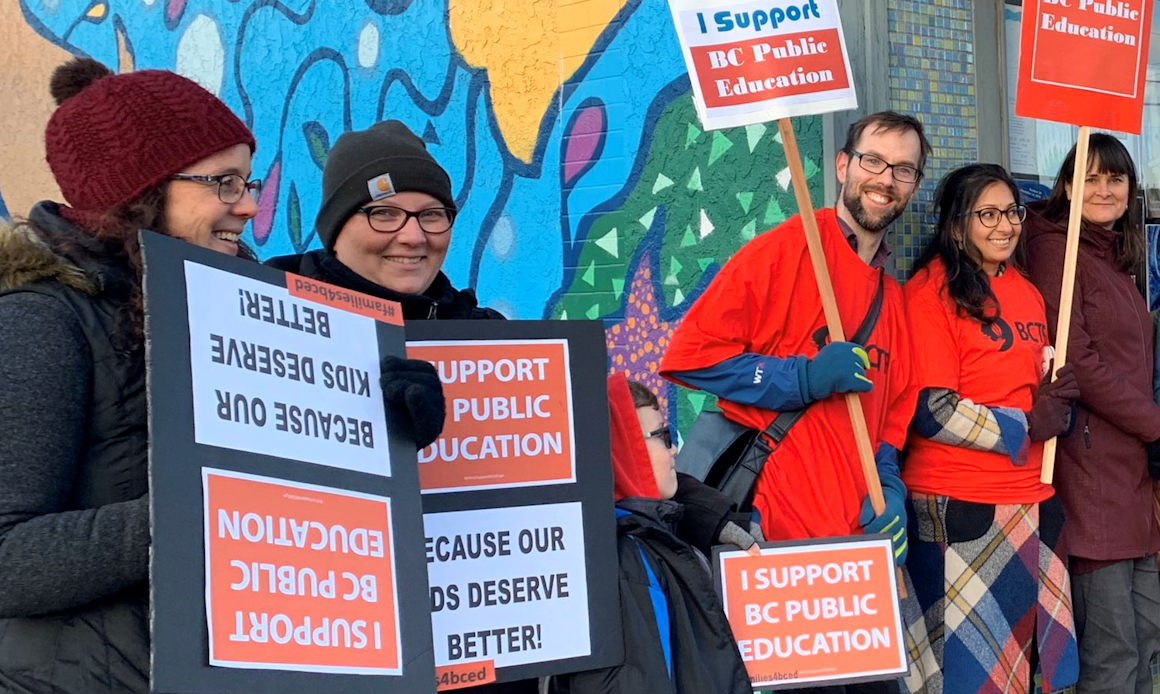 “Time flies when you’re having fun,” as the old saying goes. But it hasn’t quite worked out that way for workers in British Columbia, since the anti-labour Liberals were defeated in 2017. With the clock ticking down towards a BC election scheduled for October 2021, trade union activists are weighing up both gains and disappointments under Premier Horgan’s NDP government. The pain inflicted for 16 years by the Liberals remains fresh in the minds of many working people, but there is also a sense that the NDP has not lived up to the hopes of many who campaigned hard to elect Horgan.

That’s particularly true for 45,000 public school teachers, who remain without a contract as bargaining drags on between the BC Teachers’ Federation and the BC Public School Employers Association, which represents school district management and the government. Horgan, Finance Minister Carole James, and Education Minister Rob Fleming refuse to budge on the offer of a 2 percent pay increase.

“BC has the second lowest starting salary for teachers in the entire country and the lowest salary for experienced teachers west of Quebec,” says BCTF President Teri Mooring. “With BC’s high cost of living, school districts have a very tough time convincing teachers from Ontario or the Prairies to move west when they’re going to be paid up to 20% less. The government has been slow to act on this growing crisis and their current positions at the bargaining table will only make the shortage worse.”

The government has reached agreements with other public employees, mostly sticking to the two-percent figure which they claim is necessary to bring in another surplus budget in early 2021, the last before voters go to the polls. But the only NDP government still standing across Canada remains deeply scarred by memories of the vicious media attacks against their predecessors of the 1990s, when Mike Harcourt and Glen Clark were inaccurately roasted as “tax and spend socialists.”

The current NDP government, backed by the Greens, has rejected calls by progressive economists and social justice activists to roll back the huge tax breaks granted by the Liberals to upper income earners and corporations back in 2002. That gift to the rich is estimated to cost the treasury around $3 billion per year, easily enough to speed up the government’s welcome initiatives on child care and housing, and to help teachers and other public sector workers make up some of the earnings eroded by inflation.

As the Communist Party of BC says in the Political Resolution for its upcoming provincial convention, “the minority NDP government and their Green partners have little appetite to challenge the corporate domination of our economy.”

There have been positive changes under the NDP, says the CPBC, including limited reforms to the Labour Code, changes to allow trade union successorship in public contracts awarded to private companies, minimum wage increases (drawn out over a 4-year time frame), and reversing the Liberal child labour regulations which had lowered the legal age for employment to just 12 years old.

But those who hailed the NDP’s return to office in 2017 as a shift towards pro-labour policies have not much more to point to.

That settlement marked the end of a series of hotel strikes in Vancouver that began in September. Back in 2018, casino workers represented by the BC Government and Service Employees Union won a similar battle.

But there are also some tough, difficult battles, especially the strike by 2,400 members of United Steelworkers Local 1-1937 against Western Forest Products. Now entering their eighth month on the picket line, the WFP workers have forced the company to sell off most of its inventory, and the union’s strike fund remains solid. But there is no end in sight to one of the longest coastal forestry strikes in BC’s history.

The employers and local politicians are calling for government intervention. The last time that happened was in 2004, when the Liberal government used binding arbitration to end a three-week forestry strike. That arbitration gave the employers “alternate shift” flexibility in scheduling, which led to unsafe working conditions by requiring employees to perform long and irregular work hours. This time around, WFP is also seeking more options for contracting out jobs.

Back on the public sector side, recent collective bargaining struggles have won some protections for workers, including members of several unions in the Metro Vancouver transportation sector – bus drivers, SkyTrain operators, maintenance workers and others who keep the wheels turning for hundreds of thousands of transit users.

Another minor victory is the growing number of BC municipalities which have agreed to pay a ‘living wage,’ the hourly rate required to meet the basic costs of living – food, accommodation, transportation, childcare, and clothing. Five municipalities (Burnaby, Victoria, White Rock, North Vancouver and Central Saanich) and two school boards (New Westminster and Vancouver) have made commitments to meet this standard, according to the Living Wage for Families campaign, which estimates the rate at about $20 per hour.

At the moment, the Horgan NDP holds a strong position in opinion polls, despite unhappiness over the high cost of living in British Columbia, and considerable anger over their support for fossil fuel export policies. But the government’s reluctance to side strongly with working people could leave it with a smaller and less enthusiastic base of campaign volunteers.

That could leave the NDP vulnerable on its left flank. Some members of the Green party are urging a stronger progressive policy direction as they prepare to elect a new leader. The Communist Party plans to run more than the six candidates it nominated in 2015, and the new Eco-Socialist Party is also in the race, touting itself as “far to the left of the NDP, greener than the Greens.” Things could get very interesting as we head into next year’s election.