“These actions are acts of war and US state terrorism, which threaten to set off a regional war or even a global confrontation. This is the road to Armageddon.

“The US effort to justify its actions by claiming self-defence is as transparent as its infamous claim of “weapons of mass destruction” as justification for its 2003 invasion and occupation of Iraq.

“Likewise, the current crisis involving the US and Iran was brought about by the US’ unilateral decision to put crippling sanctions on Iran and to pull of the Joint Comprehensive Plan of Action nuclear deal reached in 2015 between Iran and the P5+1 together with the European Union.

“US imperialism thrives on aggression, tension, and war in the region, and in the world, as it seeks to strengthen its dominance over its imperialist rivals and over the sovereignty of the states, nations and peoples it subjugates.”

The Communist notes that the more immediate aim of the January 2 airstrike and assassination, which was launched by the US President personally, was to invigorate Trump’s flagging election fortunes “with a dog-whistle pitch to a fake patriotism and a fascistic national chauvinism.” 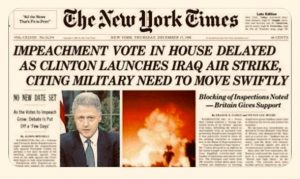 This is reminiscent of the airstrike that former US President Bill Clinton launched on Iraq amid impeachment proceedings against him in 1998.

The Communist Party demands that the Canadian government, and Prime Minister Trudeau personally, “condemn these acts of war and terrorism by the US and the Trump administration and to speak out about the enormous threat they pose to peace and stability in the world, to national sovereignty and independence, to the continued existence of the United Nations and international law.”

The Canadian government seems more concerned that it was not consulted by Trump prior to the airstrike, than over the fact that it is an illegal act of war which threatens to expand into a regional or global conflict. On January 6, Defence Minister Harjit Sajjan suggested that the Trudeau government was supportive of the US aggression. “We need to make sure we as a coalition protect our people and prevent future attacks. The Quds organization [which General Soleimani led] that has been supporting proxy groups in the region, has been responsible for thousands and thousands of deaths – plus also putting our own personnel at risk.”

The Communist Party criticizes this interlacing of Canadian foreign policy with that of the United States, and notes that there is a pattern of deepening participation from Canada in US intervention and aggression. “Canada has bowed to US pressure by agreeing to detain Meng Wanzhou for extradition to the US to be prosecuted for refusing to recognize illegal US extra-territorial laws and jurisdiction over other countries’ trade with Iran. There is no legal basis for her detention. But it is clear evidence of Canada’s changing relationship to US imperialism, and its near complete absorption into the vortex of NATO and the US war machine. Canada is now routinely involved in illegal US regime change operations, and in US dirty wars around the world including the 16 year old US-led war on Iraq which killed over one million Iraqis. Canada is now commanding the NATO mission in Iraq.”

The CPC has long called for Canada to adopt an independent foreign policy based on peace and disarmament, mutual security, and respect for the sovereignty and independence of all states and nations. In response to the current crisis, the Party calls on the labour and democratic movements across Canada to speak up against the US strike, and to condemn the US drive to a new war in the Middle East. “Public pressure on the Canadian government to oppose these illegal acts of war can help stop the outbreak of a new war, and all its consequences on the 100 million people who live in the region, and on the peoples of the world.

“Canada must reverse course, exit NATO, leave Iraq, and stay out of Iran.”