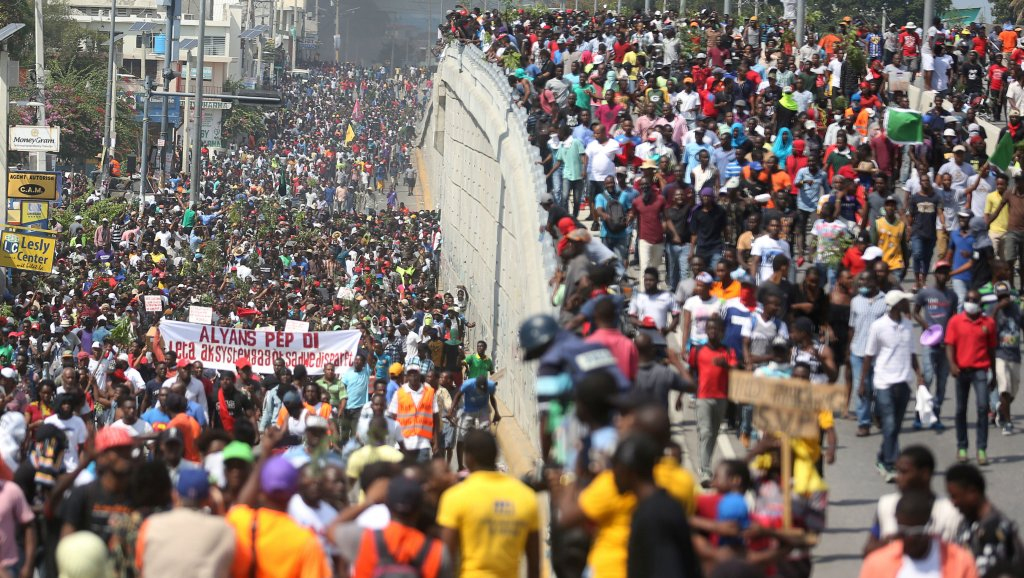 The crisis in Haiti is the most extensive, radical, and unknown of all those that are currently breaking out in Latin American and the Caribbean. Since July 2018 Haiti has been in a state of permanent popular insurrection, with peaks of massive mobilization followed by periods of stagnation. As the crisis worsens, the periods of social truce are increasingly short and unstable, and the peaks of mobilization increasingly convulsive. There have been three major catalysts for the protests:

1) The government’s attempt, in line with the IMF’s global policies, to increase fuel prices by 51%, along with the impact this would have on the price of transport, food and high cost of living overall. In response, between July 6-8, 2018, about 1.5 million people took to the streets of the country, forced the repeal of the measure and the resignation of then Prime Minister Jack Guy Lafontant, and managed to restrain the security forces which were completely overcome.

2) The revelation of one of the most serious corruption scandals in the country’s history, in which the political class, and in particular the president and the ruling party, participated in embezzling at least $2 billion from PetroCaribe’s energy cooperation agreements (an amount equivalent to almost a quarter of Haiti’s GDP). This was the main focus of the protests from September 2018 until March 2019, which saw an important role by young people organized through social networks, the so-called “petrochallengers.”

3) The energy crisis that began in September 2019 was the latest spark for protests. This was partly the result of government speculation that, by retaining its fuel supply, it could justify eliminating the subsidy as a condition to continue paying the price of imports. But even more decisive was the virtual departure of PetroCaribe from Haiti. This occurred because the blockade that the United States maintains on Venezuela prevents freighters from transporting oil to the Haitian coast. But it is also because, in a sharp shift in foreign policy, Haiti decided to withdraw its recognition of the government of Nicolás Maduro. Thus the country, completely aligned with the warlike geopolitics of the United States, began operating against the Bolivarian Revolution in regional forums like the OAS and CARICOM, reaching the extreme of being the only nation in the region to vote in in favour of invoking the Inter-American Treaty of Reciprocal Assistance (TIAR).

The energy crisis, coupled with an explosive cocktail of high inflation, currency devaluation and a wage freeze, worsened the already dire living conditions of 80% of the Haitian population. Some of the consequences of this were the shutdown of transport for prolonged periods; the crisis of the peasant agricultural economy, since lack of fuel impedes the sector’s ability to commercialize production; the consequent increase in the price of food in the big cities; the interruption of school activity and the intermittent operation of health centres; the closure of factories and small and large businesses; and worsening hunger, especially in the most isolated regions and those dependent on food assistance.

In response, the people and their rural and urban organizations took to the streets to demand the immediate resignation of President Jovenel Moïse, identified as the person responsible for the crisis. But soon the demands would escalate, becoming not only opposed to the current political class, but to the entire economic and political system. Fòk sa chanje (“this needs to change”),  chavire chodyè a (“overturn everything”), or  nou ta dwe viv tankou moun  (“we should live as people”) have been some of the slogans in the Haitian language that express the scope and meaning of popular demands.

The government has adopted different strategies to retain power and guarantee the privileges of a “repugnant elite,” as one Haitian writer christened the bourgeoisie and oligarchy who have bled the country since the conclusion of the revolution in 1804. The first strategy was silence, when the president spent a month without addressing the nation in the middle of an energy crisis and social collapse. Then came calls for dialogue, each of which failed as the different political actors distanced themselves from an obviously sinking ship. Then, as expected, they began to use repression against the demonstrations in an unsuccessful attempt to regain control of the territory, in particular the capital Port-au-Prince, which had become a powder keg. As the National Network for the Defense of Human Rights in Haiti, the UN Office of Human Rights and Amnesty International (the latter with resounding delays) found, the outcome of the repression has been tragic: excessive use of force, torture, arbitrary detentions, at least 42 dead in recent weeks and 77 so far this year. 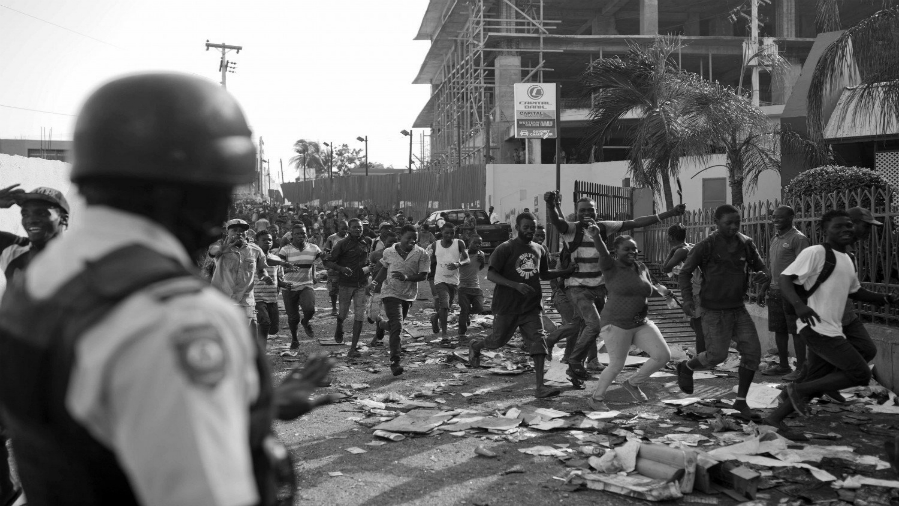 Due to the proven inefficiency and weakness of the National Police, and considering that Haiti cannot copy its Ecuadorian, Bolivian or Chilean peers by taking the army to the streets (since it was dissolved in 1995), the response that began to be imposed was paramilitarization, as has happened in all mature neoliberal regimes. Several facts confirm this tendency towards paramilitarization: the fostering of organized criminal groups that respond directly to political power, the perpetration of massacres in some rural communities or in the most active and mobilized neighborhoods, and finally, the constant infiltration by mercenaries and former US military personnel. At the beginning of February 2019, and again recently, some of these contractors were detained at Toussaint L’Ouverture International Airport carrying heavy weapons, ammunition and advanced telecommunications equipment.

On the international front, the response of the major western media has been as expected: the complete invisibility of the Haitian situation as long as possible and, when the depth of the crisis became unquestionable, its total misrepresentation. Thus, they have denied the peaceful nature of most protests, the existence of alternative government plans as well as organized leaders and social forces, and the obvious responsibility of the so-called “international community” in the Haitian crisis which is presented as fate. It is routine to one-sidedly point out the elements of violence, despair and spontaneity in a nation that is always interpreted through racist and colonial frameworks. International NGOs have also contributed to this, by spreading developmentalist and demobilizing ideologies.

Moreover, the interference of the United States, as well as that of other Western powers of smaller amounts, has been constant. At first this interference was outsourced through regional organizations such as the OAS, multilateral financial institutions such as the IMF or ad hoc interest groups like the so-called Core Group (the self-appointed “Friends of Haiti” that is aligned under US hegemony) who never ceased to tacitly or explicitly support Jovenel Moïse. But in recent weeks it has been the embassy in Port-au-Prince and the US Department of State that have publicly intervened, visibly exasperated by an expanding crisis that is already beginning to affect the profits of its transnational corporations.

On the other hand, the opposition has formed into two coalitions, from the Patriotic Forum – representing the street mobilizations and the social movements of the countryside and the city – to conservative formations such as the Consensual Alternative, the Gateway or the Democratic Bloc, that reflect different fractions of the oligarchy, the local bourgeoisie and the small reactionary bourgeoisie. Recently these and other coalitions have agreed to a series of programmatic points to facilitate the construction of a transitional government following the eventual resignation of the president.

All the factors mentioned suggest that two general exits from the crisis are possible. The current unstable balance, which the country has endured since July 2018, is unsustainable and could quickly evolve towards:

1) A regressive solution, that is, the continuity of the Jovenel Moïse government in the short term, facilitated by the United States through an agreement with the most conservative opposition, promising in return early elections and the possibility of introducing amendments to the Constitution. Given the impossibility of consensus, this solution presupposes the resurgence of the police, military or paramilitary solution, as well as the frontal defeat of the popular mobilization through the use of violence or economic shock policies. The slippery slope of Haitian reality would send the great majority to an even deeper level of pain and inequality. However, there are clear difficulties with demobilizing the Haitian people and stabilizing the dominant regime.

2) A progressive solution, which could be institutional, through the construction of a Sovereign National Conference and a transitional government in which organized popular forces contest the hegemony of the traditional political class, maintaining pressure through continued street mobilizations. Other points, already agreed upon, would be the trial of those responsible for the PetroCaribe embezzlement and the massacres, political-electoral reform and the call for clean elections, and a Constituent within approximately three years. To develop, this process requires accelerated subjective and organizational work on the part of the popular forces, as well as restraint of rival powers in the region, to safeguard a minimum of Haitian autonomy for achieving a popular government.

Lautaro Rivara is a sociologist and journalist, and a member of ALBA Movimientos en Haití.

(Translated from Spanish by Dave McKee of PV staff, and edited for length.)