The struggle that culminated in the election of Salvador Allende’s socialist Popular Unity government in Chile in 1970 was nurtured by a profound musical revolution. While Latin America’s Nueva Canción (“New Song”) movement of the sixties and seventies was a continent-wide phenomenon, many of its most illustrious figures were Chileans. Artists like Victor Jara and Violeta Parra, and groups like Quilapayún and Inti-Illimani were admired throughout the world. Today, the Chilean people are demanding an end to the authoritarian “guided democracy” that replaced the terrorist dictatorship of Augusto Pinochet, leader of the military junta that overthrew Allende in a CIA-sponsored coup on September 11, 1973. The militant spirit behind the people’s demands was given dramatic musical expression on October 27, when a symphony orchestra gathered in front of Santiago’s historic cathedral, the Sacramentinos Basilica, for a requiem concert for the dozens of peaceful protesters killed by the military and police over the past month. Thousands sang along as the orchestra played “El Pueblo Unido,” the Popular Unity anthem written and recorded by composer Sergio Ortega and Quilapayún in June 1973. Elsewhere in Chile, massive rallies and concerts have been dedicated to Victor Jara, the singer-songwriter and Popular Unity activist who was brutally murdered by the Pinochet regime in the aftermath of the coup. For an excellent article on Chilean Nueva Canción and the influence that the music of the Allende era exerts on the ongoing uprising read “¡Compañero Víctor Jara Presente!” by J. Patrice McSherry. 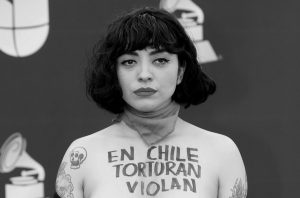 Popular Chilean singer-songwriter Mon Laferte used her turn on the “red carpet” at last month’s Latin Grammys to express solidarity with the people of her homeland. She arrived at the glitzy Las Vegas gala dressed in a long black coat and black dress pants, with a green bandana around her neck. Then, before the cameras, she exposed her breasts, revealing a message across her chest: “En Chile, torturan, violan, y matan” (“In Chile they torture, rape, and kill.”) While some were shocked by the nudity and others declared it a publicity stunt, Laferte was simply protesting, with dignity, the violence of Chile’s ruling class. Billionaire president Sebastián Piňera has deployed the state’s military and police forces to brutally repress a genuine national uprising for democracy and an end to neoliberalism. When Instagram prevented Laferte’s protest photos from being easily searched and located, her response was to post: “My body for a free homeland. If the images were men’s breasts they would not be censored.” Mon Laferte was born in 1982 under the Pinochet dictatorship and grew up in a struggling working-class family. When she told a BBC interviewer that “all Chile is furious about inequality” it was not the comment of a frivolous publicity seeker. Incidentally, Laferte’s album Norma received a Grammy (her second) for Best Alternative Album. 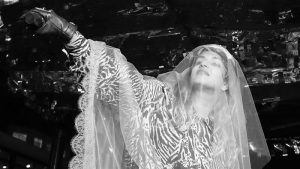 Assange’s father, John Shipton, and fashion designer Dame Vivienne Westwood also spoke at the rally, where hundreds gathered in support of the Wikileaks publisher and journalist. The popular Sri Lankan-born singer had visited Assange at London’s high-security Belmarsh Prison on October 19. Asked after that visit for her opinion on media coverage of Assange, M.I.A. said, “I think there should be more, given that now we know the truth and that the debate is about extradition to the USA. It’s no longer about all the other things people have accused him of. Now it’s about truth, and that’s something people have to uphold and fight for, especially in these years.” Assange is being held in solitary confinement at Belmarsh while he awaits a February extradition hearing that could see him shipped off to the United States to face charges under the Espionage Act of 1917.  If convicted there he faces sentences of up to 175 years in prison. “The bottom line,” says M.I.A., “is that he’s in there [Belmarsh] because he exposed some war crimes. We can’t make it an example to society where we penalize people for that.”

Canadians for Justice and Peace in the Middle East (CJPME) is sponsoring a campaign to persuade Céline Dion to cancel two upcoming shows in Israel. The 51-year-old vocalist, Quebec’s most celebrated international star, has announced that she will be giving concerts in Tel Aviv on August 4 and 5, as part of her Courage world tour. Since 2005, Palestinian civil society has asked the world to boycott Israel until it respects the human rights of Palestinians. Dozens of renowned performers have shown the courage to respect the Boycott, Divestment, Sanctions (BDS) campaign, including Roger Waters, Lorde, Elvis Costello, Lauryn Hill, Chuck D, Bjork, and Peter Gabriel. Sign the petition at  www.cjpme.org/dont_go_celine (and stay tuned).