Asia’s most expensive and biggest election is going on in seven phases in India from April 11 to May 18. Across 29 states and 7 union territories, around 900 million voting population will participate. There will be approximately 10 lakhs (one million) polling stations, and of the total electorate, 15 million will be the age group of 18 to 19 years. People want a government which will bring peace in the country and simultaneously generate jobs and boost the economy. Considering the scenario, the 2019 election is crucial for India.

In the last five years, the Bhartiya Janata Party (BJP)-led National Democratic Alliance (NDA) was in power. Narendra Modi as the prime minister of India made numerous commitments and fulfilled nothing. His communal and corrupted government has taken the country to a disastrous point.

In Indian politics, the Left Front parties are the biggest enemy of the BJP, and the only truly secular force in the country. In this election, they have nominated about 70 candidates in the 543 ridings of the Lok Sabha (lower house of India’s bicameral parliament).

The Left parties’ main instrument for the election is to expose the BJP’s “communal and anti-people” policies to the masses. In the election campaigning, the Communist Party of India (Marxist) General Secretary Sitaram Yechury said that ‘’The BJP government has created a situation of undeclared emergency in the country and freedom of democratic institutions such as judiciary and election commission was under danger. Those who do not support BJP were declared traitors and it was important to defeat communal forces to save the country’s secular democratic values.’’

The Communist Parties and their alliances always opposed this communal treatment. In India, only the leftists never encouraged any communal sentiment among the people.

The policies taken by the Modi government have not effectively addressed any of the challenges faced by over half of the population. The central Government owned Telecom Company Bharat Sanchar Nigam Limited is going into private hands, the banking system is in danger, and the postal department also has the same fate.

The agrarian crisis (amplified by the suicide of farmers), and urban distress (illustrated by the growth of slums) have become normal in Indian life. The voice of Dalits (so-called “untouchables”), Adivasis (indigenous peoples who make up about 9% of the population), labourers and workers have been muffled. India’s Left parties are amplifying the voice of farmers, peasants, workers, women, Dalits, and Adivasis. The Left’s central role is to mobilize the masses and raise the issues of injustice and inequity.

It is very important to mention that in the 2019 general election, the BJP is again trying to win the people’s faith with the “Hindutva” sentiment. The “saffronisation” of India is their only motive. Apart from Hindutva, they have no agenda. One of the BJP’s most popular slogans is to make India a Hindu country. 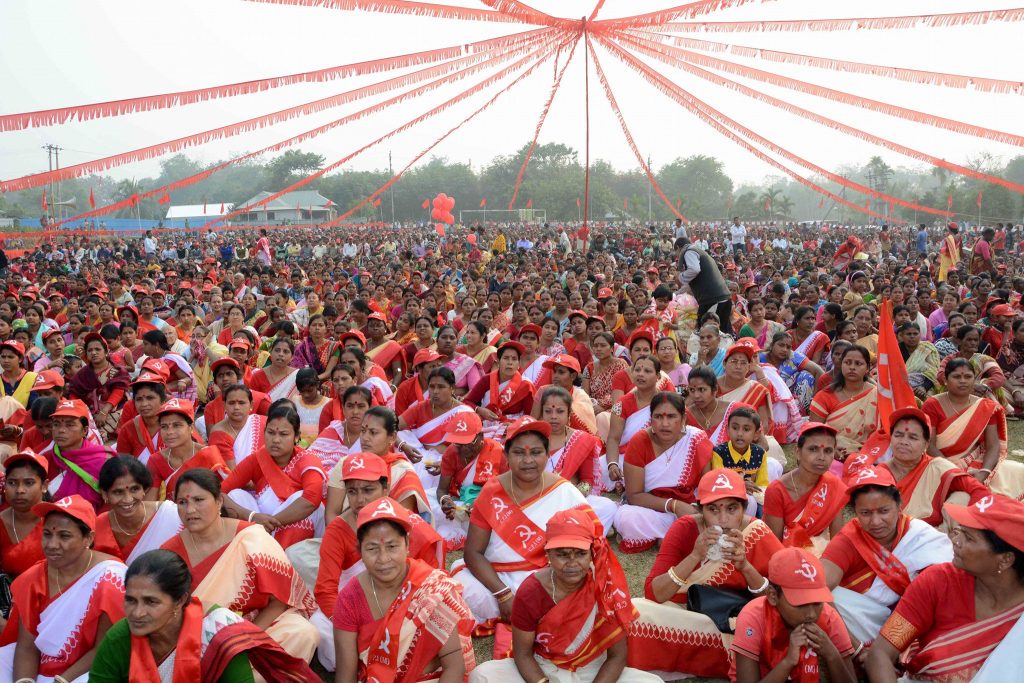 In 24 out of India’s 29 states, cow slaughter restricted, whereas there are no such regulations on animal trade of goats or sheep. In some states such as in Gujarat, the government has introduced a law that makes cow slaughter an offence punishable with life imprisonment! In Uttar Pradesh, the government banned cow slaughter and introduced Gau Rakshak (cow protector). In the name of cow protection, they lynched Muslims in the state, such as the Mohammed Akhlaq lynching case. “Love jihad” is one of the tools used in the religious warfare openly propagated by the BJP, RSS and other Hindu organizations.

The Left forces have fought against the dangerous cow protectors. They organized the volcanic farmers’ movement. Over the past few years, many people agitated against the vicissitudes of capitalism and the failure of the Modi government. But without a strong Left party in the country, no one will address these issues for the people throughout the coming years.