(The following statement has been signed by dozens of Communist and Workers’ parties around the world, including the Communist Party of Canada.)

The Communist and Workers’ Parties undersigning this statement have consistently supported the struggle of the Sudanese people for peace, democracy, human rights and social justice.

Since 19th December 2018 we have closely followed the struggle of the Sudanese working people against the repression meted out to the political forces daring to challenge the dictatorial regime which has been in power since 1989. Millions of people from all corners of Sudan have joined the peaceful struggle for a bona fide transition to democracy. For nearly four months people have taken to the streets to voice their demand for a genuine end to dictatorship and real change.

We have noted the attempt by the military forces of Sudan to take over the political power in the country, removing Omar al-Bashir on 11 April and forming a Military Transitional Council (MTC). The MTC initially declared a three-month state of emergency and has stated that it will only transfer power to civilian democratic forces after two years. The people of Sudan and their democratic political forces have rejected the move by the military forces which have been integral to the dictatorial regime and lack any legitimacy.

While the people of Sudan have rejected the emergency declared by the MTC as illegitimate, the USA, Saudi Arabia, Bahrain and UAE have already recognised the MTC.  We have noted with concern the news of the meeting of Steven Koutsis, the US envoy in Sudan, with Mohammad Hamdan Daglo, the deputy head of the MTC, in the compound of the presidential palace in Khartoum. Daglo is the commander of the Rapid Support Forces, essentially comprising of the infamous Janjaweed militia who for fifteen years have been reigning terror upon Darfur and are responsible for crimes against humanity in the murder of tens of thousands of people there. The Sudanese political opposition are deeply worried about the nature of the US diplomats’ activities and their implications for the future of democracy in Sudan.

The Forces for Freedom and Change, including the Sudanese Communist Party, have called for further intensified mass united actions to thwart all conspiracies hatched by the USA and its regional reactionary allies to impose the project of ‘soft landing’ with the aim of frustrating the struggle for a secular, independent and democratic government.

The Communist workers parties undersigning this statement support the masses of Sudanese working people protesting in the streets of the capital and other major cities and towns around the country with their slogans “Freedom, Peace and Revolution is the People’s Choice”.

We declare our internationalist solidarity with the struggle of the Sudanese people as represented by the Forces for Freedom and Change, including the Sudanese Communist Party. 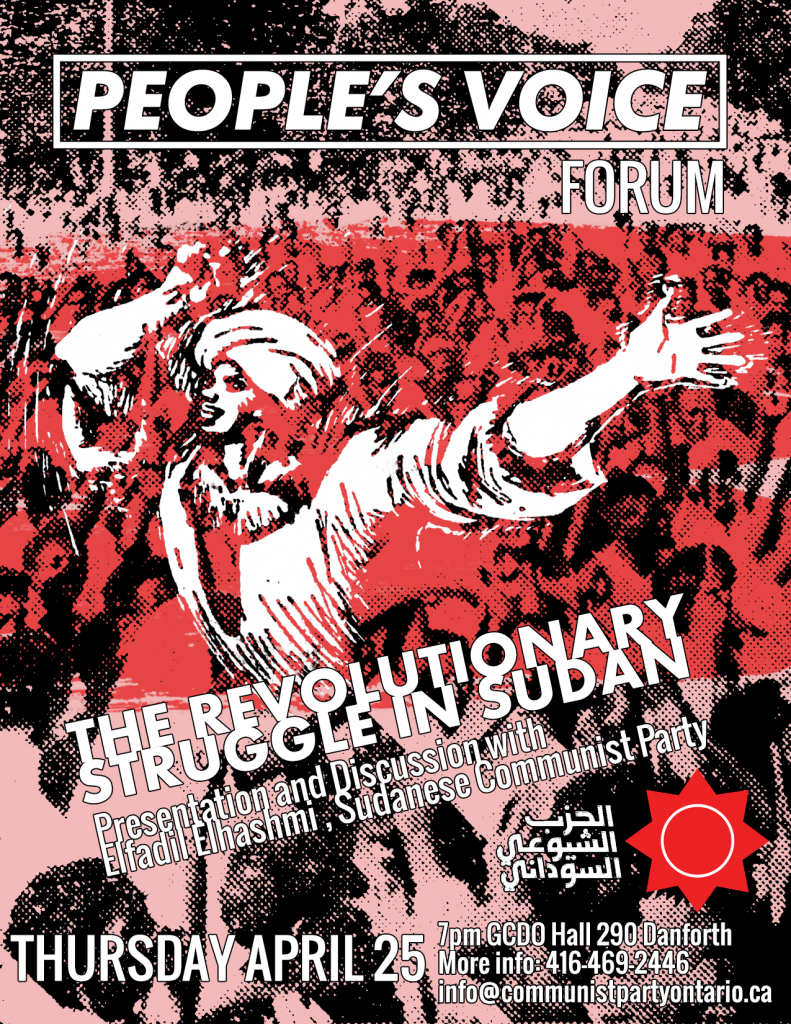