Tens of thousands of workers and farmers from different states in India marched in New Delhi on September 5, to protest the government’s anti-people policies and demand higher wages and relief from debts.

In the biggest rally of working people that Delhi has seen in decades, workers went to Parliament Square to demand the effective implementation of labour and agriculture laws. People from different areas started flocking to the capital the previous day, camping out at Ramlila Maidan before marching against the government’s policies, which only profit big corporations.

“This government’s policies are beneficial to corporates and not the people. We want the government to change its policies,” Hannah Mollah, general secretary of one of the organizing groups, All India Kisan Sabha (AIKS), told reporters. 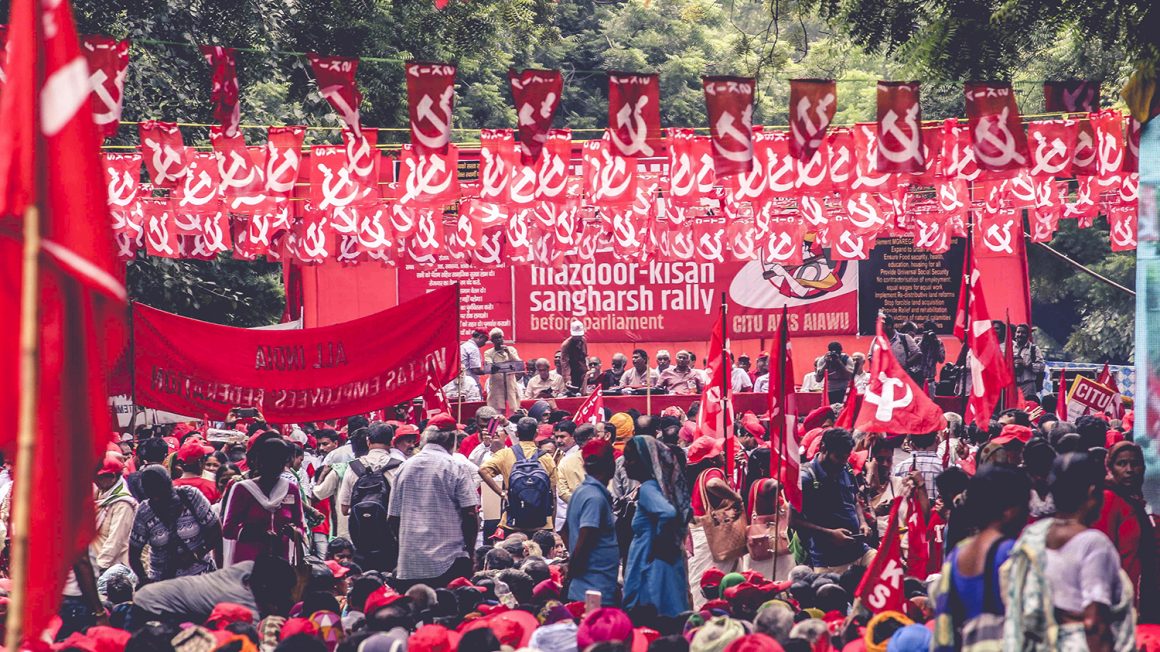 The rally was organized by the Centre of Indian Trade Unions (CITU), All India Kisan Sabha (AIKS) and All India Agriculture Workers Union (AIAWU), groups led by the Communist Party of India (Marxist), but others joined in as well.

AIKS president Ashok Dhawale said many of those attending weren’t linked to his organisation, but came to Delhi since they were victims of government’s anti-people policies. The protestors’ list of 15 demands ranged from curbing prices rises and implementing a minimum wage, to debt waivers. 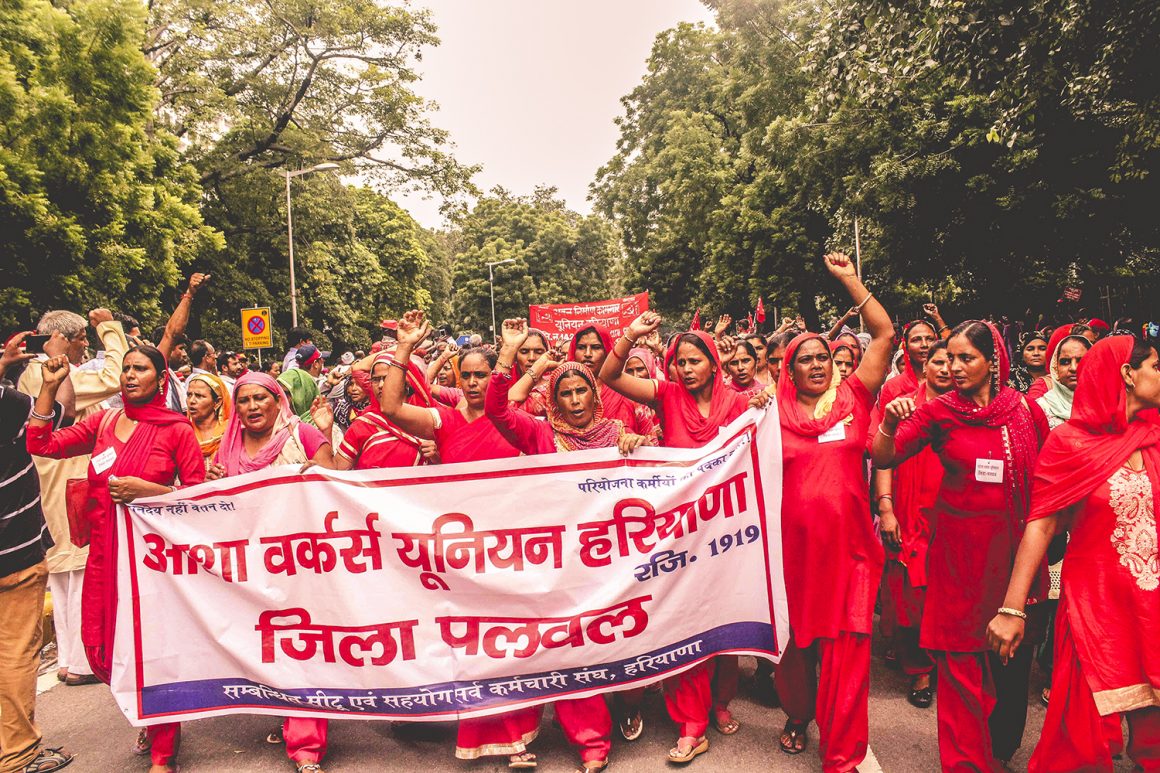 A joint statement by left parties the following day called for another huge mobilization on September 10.

“Unprecedented economic burdens are being mounted on the people by this Modi government,” said the united statement. “The exponentially rising  prices of petroleum products is having a crippling effect on the livelihood of Indians. The farmers, already groaning under mounting  agrarian distress, see their production costs further escalated.  This price rise has a cascading all-round inflationary impact. This is contributing to a further economic slowdown reducing existing employment, leave alone creating any new opportunities. The unprecedented fall in the value of the Indian rupee reflects the deep economic crisis created by this Modi government. Such economic attacks on the people come on top of the vicious communal-authoritarian onslaughts mounted by this Modi government.

“While the peasantry all over the country has been demanding the promised remunerative price and loan waiver, the Modi government callously refuses. On the other hand, it shows largesse of waiving off massive loans taken by the corporates during the last four years… Such crony capitalism is also evident in the various deals, like the Rafael fighter aircraft purchase scam, that is fast unfolding. Obdurate rejection of any enquiry into this deal only reconfirms the scam. Black money, instead of recovering, as promised, has been legitimized.   All efforts to divert  people’s attention away from these monumental failures by spreading an atmosphere of hate, violence and indiscriminate arrests of activists will not succeed.” 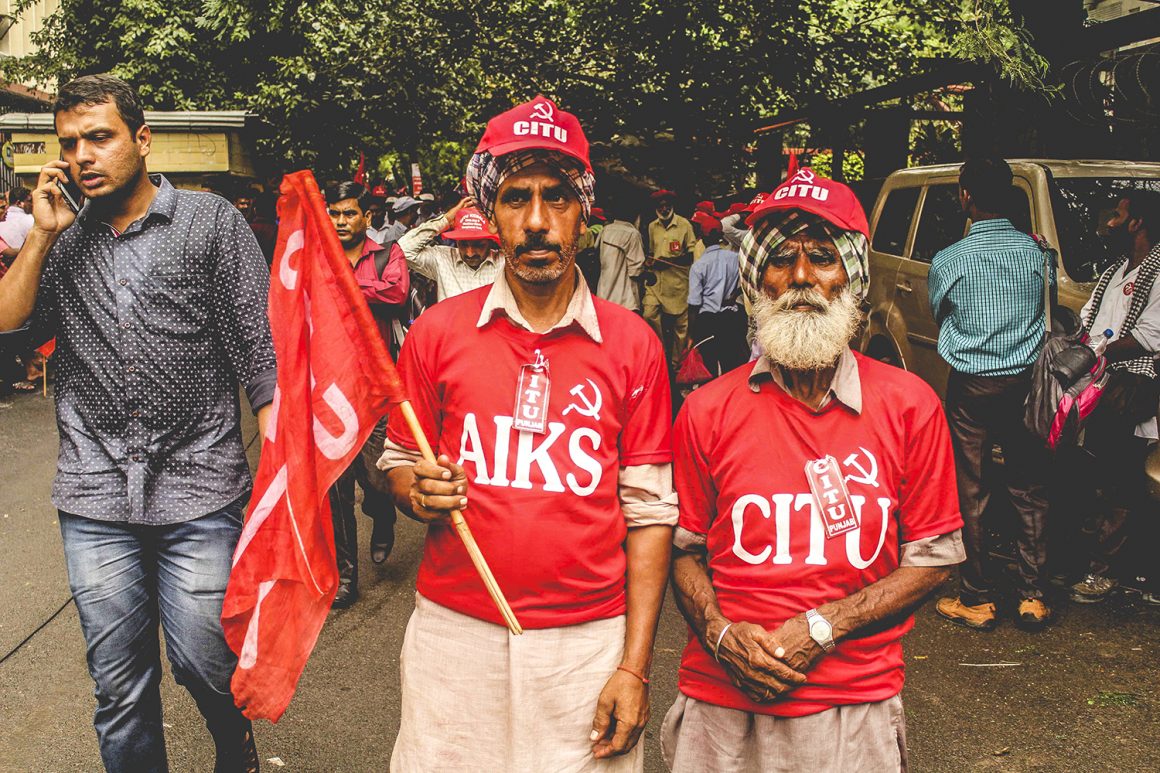 These mobilizations follow mounting protests by the distressed peasantry seeking land rights, pensions, food security, remunerative prices, loan waivers and other demands. The Sept. 5 protest was unusual because peasants and agricultural workers were joined by industrial workers and employees who have been struggling against the Modi government for better wages, better social security, against privatisation and against dilution of labour laws, among other demands.

A new stage has been reached in struggles that have been going on for the past several years. The wave of protests that began in Rajasthan against power price hike continued to hit Maharashtra, Madhya Pradesh, Himachal Pradesh and engulfed Haryana, Jharkhand, Gujarat and several other States. Struggles on other issues like land acquisition and infringement on land rights as well as forest rights, and restrictions on cattle trade are also building up.

The BJP Government had come to power riding a wave of popular discontent against the Congress-led UPA. Modi had promised that his government would usher in “achhe din” (good days) for farmers, declaring all kinds of policies to attract them in the 2014 elections. Four and a half years down the line, the farmers and rural poor stand betrayed. As promises of better prices for their products have been turned into a cruel hoax, farmers’ suicides have continued unabated.

A government attempt to facilitate corporate take-over of land through a draconian Land Acquisition Ordinance sparked the first signs of a united resistance, forcing Modi to temporarily hold back and change strategy to push it through BJP-ruled States. The first instance of broad issue-based unity came in the struggle against the Ordinance, when the All India Kisan Sabha (AIKS) played a role in bringing together over 300 organisations of the peasantry, agricultural labour, oppressed sections and civil society groups under a banner called Bhoomi Adhikar Andolan. Massive struggles erupted, as thousands marched to Parliament more than twice. Ordinance copies were burnt in more than 300 Districts, and 100,000 signatures were collected against it, forcing the BJP government to retract.

But meanwhile, two consecutive years of drought led to massive losses for farmers, and the government response was seen as insensitive. The continuing series of protests and agitations has now reached a stage where peasants and workers are demanding that the Modi government should be thrown out in next year’s elections.