At the end of the National Conference of the Communist Party of Venezuela (known by its  Red Rooster symbol), party activists gathered on February 26 to announce the Communists’ strategy for the May 20 presidential elections.

After negotiations and sometimes heated internal discussions with the United Socialist Party of Venezuela in power, the Communists have chosen to support the candidacy of incumbent President Nicolás Maduro, on the basis of a common framework agreement read by two executives of the Venezuelan Communist Youth and acclaimed by the assembly. After reading it, the text was initialed by two members of the national leadership of the PSUV, two members of the Political Bureau of the PCV as well as by Nicolás Maduro himself.

This unitary framework agreement represents a first in the history of the relationship between the two artisanal parties of the Bolivarian process: for the first time, the two progressive forces agree to respect a common road map for a minimum program in office.

In outline, the agreement proposes a plan to “confront the crisis of rentier and dependent capitalism … with anti-imperialist, patriotic and popular political and socio-economic actions. Thus, in addition to underlining Venezuela’s international danger, a danger all the more real since Rex Tillerson did not conceal his enthusiasm for the possibility of a military intervention against Venezuela, the agreement puts into effect guard against the crisis of capitalism that strikes Venezuela, corruption and bureaucratism. He also advocates a way out of crisis to the detriment of the bourgeoisie and says that the only possible exit can be made only by breaking with the capitalist model and the establishment of a “new productive model.”

The text also commits the two parties to defend the rights of workers by strengthening class unionism and “all the various expressions of the revolutionary workers’ movement,” which includes trade unions, but also the Socialist People’s Councils. The strengthening of the Organic Labor Law is also on the agenda.

As for the economic aspect, the VCP and the PSUV agree to put an end to the dismantling of public enterprises, to promote the nationalization of trusts and monopolies and to experiment with a system of democratic and multiple control of national enterprises.

The agreement also stipulates that for all matters relating to culture, sports, education and youth rights, youth organizations from both parties (JCV and JPSUV) will have to be consulted.

This declaration of unity was signed on the eve of the announcement of Maduro’s candidacy for the presidential elections, the PCV conditioning its support for Nicolas Maduro on the adoption of a frankly anti-imperialist joint agreement, considering that the Venezuelan opposition may use the most reactionary forces to fill the imperialist’s road map to secure its hold on the country, and to advance the process of social transformation initiated since Chavez came to power in 1998.

Thus, after several days of discussions, representatives of the PSUV and PCV agreed on eighteen points to maintain and strengthen the unity of anti-imperialist forces in Venezuela and to stand together against the dangers of interference or even imperialist military intervention. 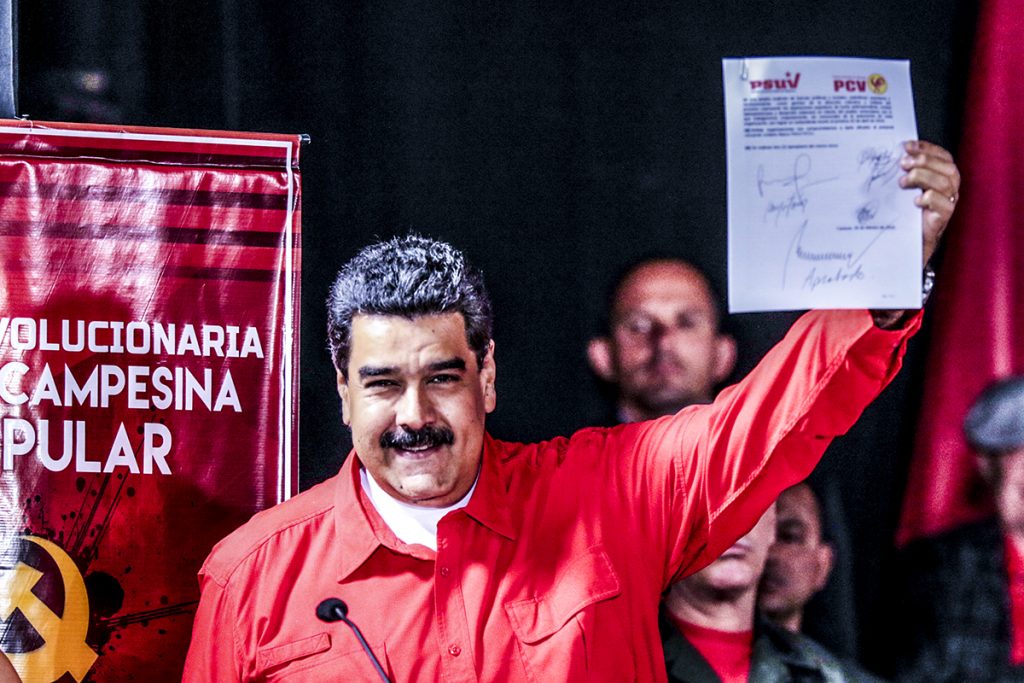 Maduro, who was present during the presentation of the agreement with the activists of the PCV, emphasized his appreciation of the role played by the Communist Party, the party which acted as a guarantor of democracy throughout the twentieth century, and the first political formation to have seen in Chavez the image of a leader of a new model for Venezuela.

He recalled that in recent years, “despite our miscommunication [referring to the lack of dialogue between the forces of the Great Patriotic Pole Simon Bolivar, the coalition of progressive and anti-imperialist forces led by the PSUV] and sometimes political, I have always been able to count on the moral, political support […] of the PCV, on his words of […] truth, on his humility, on his struggle, on his flags […]. There is not a moment of danger where the Red Rooster Flags [allusion to the symbol of the CPV] have not floated in the streets in the hands of the youth, the hands of the workers, the hands of the men and women who are fighting to the PCV, with its identity and commitment.”

“Thank you to the JCV,” he concluded.

For the communists, this development is of particular importance. According to Oscar Figuera, General Secretary of the PCV, this is a historical development that marks a qualitative change in the relationship between the two main parties of the popular anti-imperialist alliance. For the first time in 19 years, the PSUV and the PCV agree on a programmatic basis to deepen the social transformation undertaken by Chávez in 1998, which strengthens the popular unity necessary for a new popular victory on May 20.