By an odd coincidence, when Communist Party of Canada leader Liz Rowley and I travelled to Russia last month, our flight had a stopover in Zurich – the city where Vladimir Lenin and other revolutionary exiles lived before the overthrow of Tsar Nicholas II allowed them to return home. Three hours later, we were disembarking in Leningrad (as Petrograd was renamed after his death), the city where Lenin and his comrades became the key figures in the “ten days that shook the world”.

As described above on this page, we were in Russia as delegates representing the Communist Party of Canada at the 19th annual gathering of fraternal Communist and Workers’ parties. The main work of this year’s IMCWP was an intense two-day meeting where most of the attending parties spoke about the relevance of the October Revolution, and the struggles for socialism today. 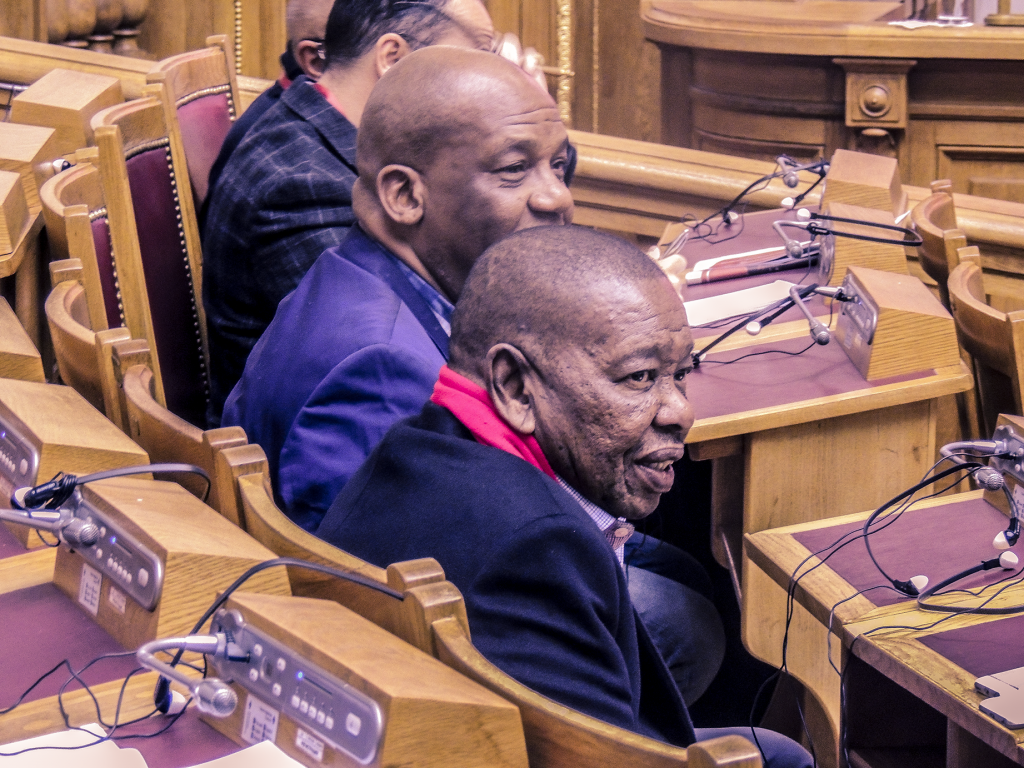 The timing was also a unique opportunity for over 200 delegates and many other unofficial foreign participants to take part in a range of other activities to mark the centenary of the October Revolution.

Others were present on behalf of liberation movements which won victories over their colonial and imperialist masters in large part due to the fraternal assistance of the USSR and other socialist states. These included SWAPO from Namibia, the ANC from South Africa, and others. 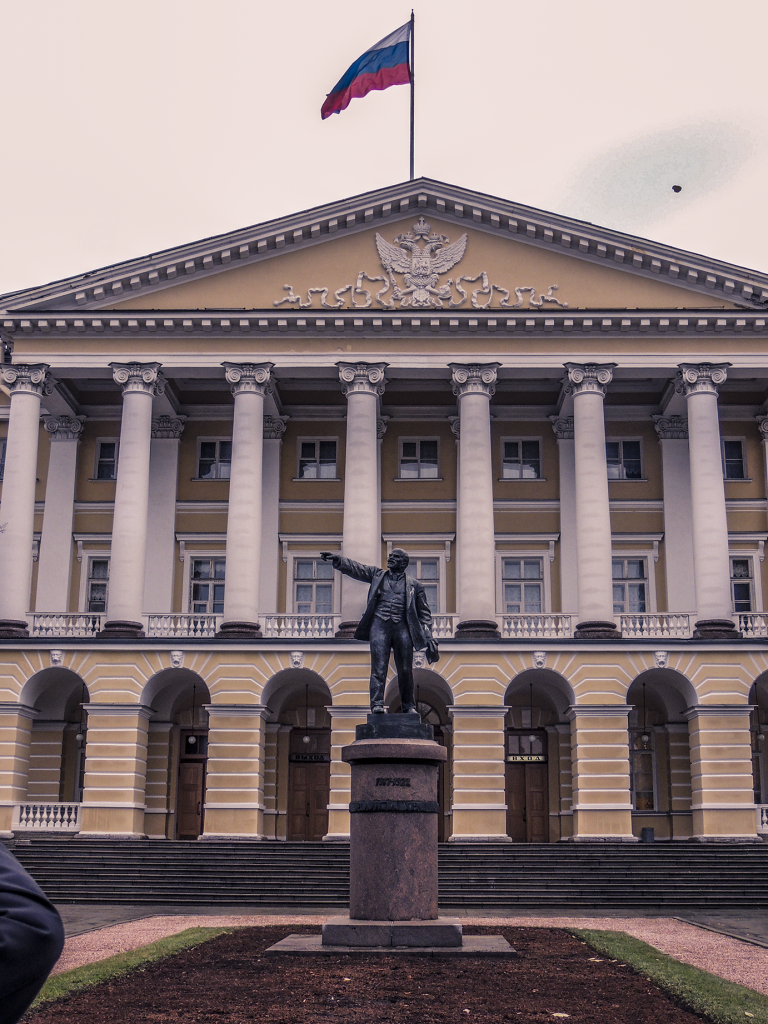 Special gala cultural celebrations were organized by the Communist Party of the Russian Federation (CPRF), at a major downtown theater in St. Petersburg, and at the Luzhniki sports complex in Moscow. Both events featured a wide range of stunning dance and music performances, paying tribute both to the October Revolution, and to highlights of seventy years of the successes of socialism in the USSR.

Delegates were taken on several tours to places associated with the history of the revolutionary movement in Russia, such as the Aurora Cruiser, from where the blank shot signalling the uprising against the Provisional Government was fired. We toured the Smolny, which was the headquarters of the Bolsheviks during the October Revolution, and the IMCWP itself was held in the same building where meetings of the Petrograd Soviet convened during 1917.

In Moscow, delegates toured the Kremlin, joined a special ceremony to lay flowers at the tomb of the unknown soldier just outside its walls, and visited the Lenin Mausoleum.

November 7 was the 76th anniversary of the famous 1941 military parade in Red Square, from which Red Army troops marched directly to the outskirts of the city to battle the Nazi invaders. On this occasion, IMWCP delegates and other visitors witnessed a special re-creation of that parade, organized to represent the war against fascism, the defeat of Napoleon’s armies, and other notable episodes from Russian military history. 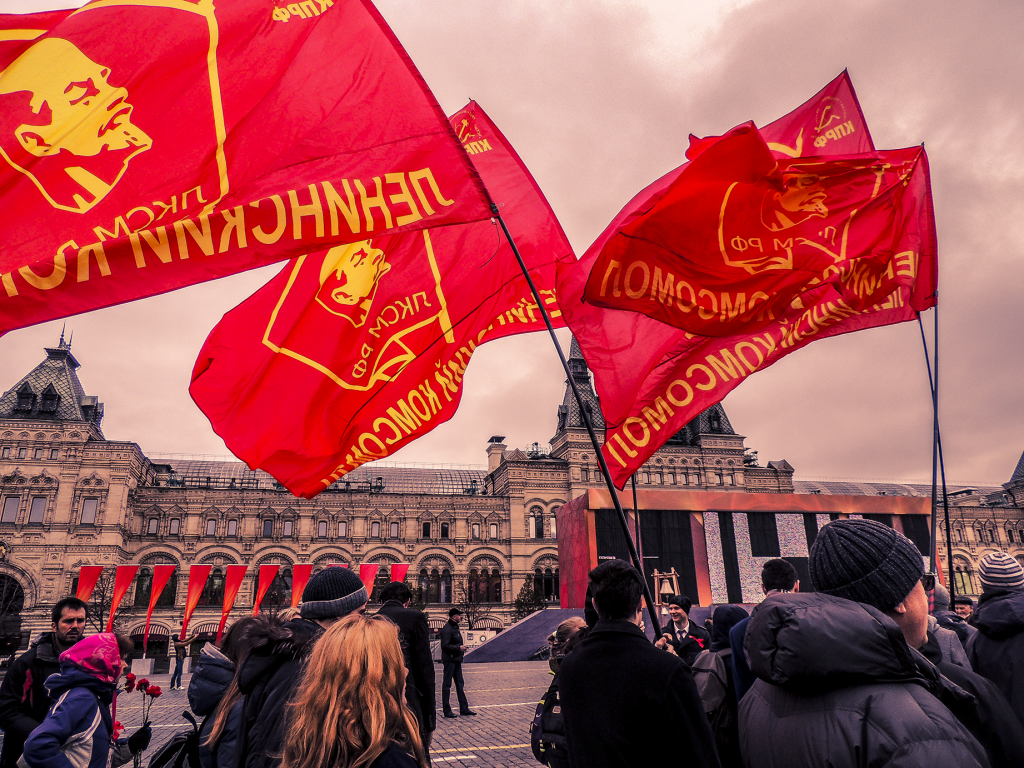 Later that afternoon, the CPRF held a street demonstration attended by thousands in downtown Moscow, using the occasion of the October Revolution centenary to recall the working class gains achieved during and after 1917, and to raise demands for progressive change in today’s capitalist Russia.

One feature of all these activities was the presence of large numbers of young people. After the overthrow of socialism in the USSR, pro-capitalist critics crowed that once the “older generation” were gone, there would be no communists left in Russia. But the CPRF reports that it has recruited 27,000 young members so far this year, and wherever one goes in Moscow or St. Petersburg, young people wearing radical t-shirts and buttons can be seen. Clearly, for them, the Great October Socialist Revolution is not just a page from the dusty past, but the beacon of a future socialist Russia.