The oldest member of the Communist Party of Canada, Maurice Rush, died peacefully on August 18, eight months after reaching the age of 100, after decades of involvement and leadership in the key working class struggles of the last eighty years.

Born in December 1915 in Toronto, Maurice was one of nine children in a Jewish family which fled Czarist oppression in Poland. As he wrote in his political memoir, “We Have A Glowing Dream,” the Rush family moved to Los Angeles in 1923, and then to Vancouver the following year. Maurice attended his first Communist public meeting at the age of 14, and left school soon after to find work. Seeking better opportunities as the Great Depression deepened, the family moved to Kamloops in 1930, but economic conditions became steadily worse. In January 1934, he and several other activists established a Kamloops club of the Communist Party, determined to organize the unemployed and fight for social justice. Working in a local cannery, Maurice helped lead a strike for better pay and working conditions.

By early 1935, the struggle of the Communist-led Relief Camp Workers Union against Tory Prime Minister R.B. “Iron Heel” Bennett’s slave labour camps was gathering momentum. As the 19-year-old secretary of the Young Communist League club in Kamloops, Maurice was tasked with organizing billets and meals for about 70 RCWU delegates at the historic March 1935 conference which voted to launch a strike and take the demands of the unemployed to Vancouver. After more than two months of creative and dynamic political activity in Vancouver, the RCWU decided to take their fight directly to Parliament. The resulting On to Ottawa Trek was smashed by RCMP violence in Regina on July 1, but these events set the stage to defeat the Conservatives in a federal election months later, followed by the closing of the camps and a long series of important victories by the labour movement.

Maurice was soon a key leader of the YCL and the Communist Party in British Columbia. He was involved in the famous 1938 Vancouver post-office sit-down strike by unemployed workers, and later served as an artillery instructor in the Canadian military from 1942-1944. He fought Hitler’s fascists in Holland and Germany, where was taken prisoner in February 1945, and later liberated by British forces. Upon his return to Canada, he became the BC organizer of the Communist Party, and later served as its BC labour secretary, Vancouver regional organizer and national education director. In 1960, he was appointed associate editor of the Pacific Tribune, one of the forerunners of People’s Voice, and then became the editor in 1970. In 1977, he became the party’s BC provincial leader, a position he held until retirement. For many years, he was also a highly respected member of the Party’s Central Committee.

Over the Cold War decades and beyond, Maurice was deeply involved in labour activities, struggles to defend BC‘s forests and fisheries against corporate pillaging, campaigns against the arms race and the US imperialist war in Vietnam, municipal reform movements, the long and successful effort to establish the Committee (later Coalition) of Progressive Electors, the Operation Solidarity struggle against the Socred government’s austerity attack in 1983, and many other issues. Thanks to the efforts of Maurice Rush and other party leaders, BC Communists played a much larger role than their numbers, combining a strategy of broad unity around immediate demands with the aim of a socialist Canada. 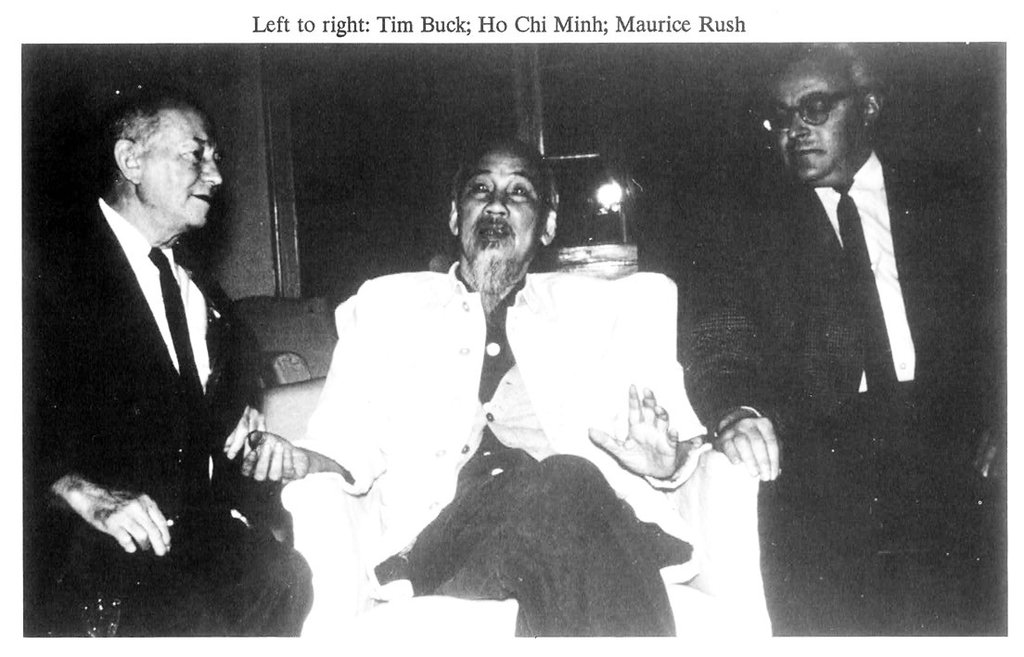 Maurice travelled overseas to various socialist countries on behalf of the Pacific Tribune and the Party, including to the USSR, the German Democratic Republic, China, and Vietnam, where he and long-time CPC leader Tim Buck met with Ho Chi Minh in December of 1965. After a section of the leadership tried to liquidate the CPC in the early 1990s, Maurice was among those who remained loyal to the Party and to its ideology of Marxism-Leninism, helping to publish the Western Bulletin, which was an important vehicle to project Communist views on current issues. After the Party’s 30th Central Convention in December 1992 restored control to the membership, he became a frequent contributor to People’s Voice. In 1995, Maurice published his memoirs, and he continued his participation in the North Shore Club CPC as long as health allowed. At a celebration of his 90th birthday, he gave his last timely speech, warning about the dangers of the Harper Conservatives, who won a minority government just weeks later. In his later years, Maurice was a resident of the Silver Harbor seniors’ centre in North Vancouver.