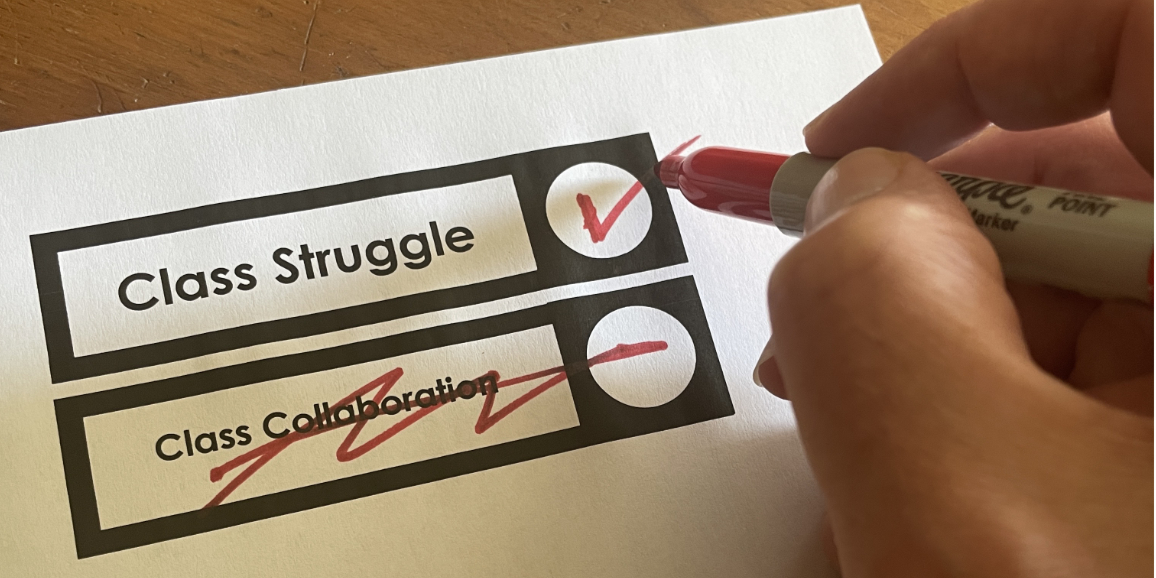 Quebec’s October 3 election is a critical moment for working people. Beyond the near certainty of a Coalition Avenir Québec (CAQ) victory, it will enshrine a new political balance which will have a significant on the resistance to capital.

The key issue for François Legault is to maintain the personal power which he used extensively during his last mandate, allowing him to govern by decree on healthcare over the past two years. For the CAQ, the main aim is reinforcing its hegemony and establishing itself as the cornerstone of monopoly capital’s political realignment.

It’s a massive political restructuring in which the opposition parties are fighting for their very survival.

The Liberal Party (PLQ) and the Parti Québécois (PQ), both of which governed in service of the bosses between 1976 and 2018, are struggling to carve out a place for themselves in this new balance of forces. The PLQ’s “economic” credentials have been usurped by the CAQ, so it has retreated to the English-speaking vote and hostility to any talk of Quebec’s national rights. As for the PQ, it can no longer claim to be the sole guarantor of independence – this is now contested by Québec solidaire, which has the advantage of not working under the shadow of two referendum defeats. Furthermore, CAQ’s ethnic, reactionary and narrow nationalism appeals to part of the PQ voter base. It is no coincidence that defectors from these two parties are flocking to the CAQ – Legault himself was a minister in the Bouchard government. On the other hand, current PLQ leader Dominique Anglade is the former president of CAQ, further demonstrating that the distinction between Liberals, caquistes and péquistes is very thin.

On the left, Québec solidaire has discarded many key policies to move closer to power and be seen by the bosses as a credible option. In doing so, it is gradually abandoning the question of establishing a new balance of power between capital and labour and focusing instead on social issues with which it can court the reformist petty bourgeoisie.

At the other end of the political spectrum, Éric Duhaime’s Conservative Party of Quebec has consolidated a dedicated far-right grouping which unites conspiracy theorists, defenders of anti-scientific discourse, part of the ultra-conservative base of the former Action démocratique du Québec (ADQ) and people claiming to be part of an “anti-system” libertarian pseudo-left.

Why such a political realignment?

In the current context of sharpened global competition between monopolies and the danger of economic recession or even depression, capital no longer has room to maneuver. More than ever, political order must be maintained. This requires destroying the framework of class solidarity, however limited, that has been achieved so far and blocking any attempt to expand it. Anything that prevents the bosses from having a free hand, any obstacle in the race for capitalist profits must be abolished. The burden of the capitalist crisis must be put on the backs of working people, but social peace must be maintained. In short, capital needs a stable and “consensual” political vehicle.

Over the past four years, Legault and CAQ have been capital’s most reliable vehicle. A skillful political strategist, he has wielded both carrot and stick to build up unparalleled political stock which quickly bore fruit with the almost providential arrival of the COVID-19 pandemic.

Four years of personal power for the benefit of the bosses.

One of his first pronouncements was Bill 21 on the “secularity” of the state, which satisfied the most nationalistic fringe of his electoral base. In 2021, he outdid himself with Bill 96 and his revision of Bill 101. Neither of these bills achieves their claimed objective – they rather foment division among workers by seizing upon the national question without ever mentioning the key element for resolving it in the interests of the working class: the right to self-determination up to and including secession. Bill 21 stigmatizes Muslim women and restricts their access to the workplace and Bill 96 is divisive, particularly within the labour movement. With such measures, Legault seeks to create a “civil war between the poor” and exploit the reactionary potential of the national question rather than its progressive prospects.

Seeking to replace democracy with management, he introduced Bill 40 to abolish school boards and change them into “School Service Centres” which have no elected positions. The government has ruled the healthcare system by decree throughout the pandemic, pushing healthcare workers to the point of burnout without having to consult the National Assembly. The clear goal from the beginning has been to run Quebec as if it were a business – in the race for profits, there is no room for democracy!

Legault has been most vicious in the struggle between capital and labour. Early in his mandate, he showed his true colours by siding with management during the lockout at the ABI aluminum plant in Bécancour. In the 2021 public sector negotiations, he offered more than the weakest unions were asking, forcing a speedy agreement while fomenting division and isolating the more militant unions. While he refuses to cut public services – since his electoral victory was due in part to his rejection of Couillard’s austerity package – he also refuses to properly fund them. He is even using the bankruptcy of the healthcare system to pave the way for privatization. Pressured by a highly political strike by daycare workers, Legault has promised new childcare spaces – but rather than strengthening the public network, he is converting non-subsidized spaces into regulated ones without confirming that they will be public. With Bill 59, he used the pretext of better coverage to wipe out gains made in occupational health and safety prevention and compensation.

Legault knows that the long-term success of his political project depends on winning part of the labour movement to support institutionalized government-business-labour dialogue, as occurred in the zero-deficit era. This is why he is tempering his attacks and working meticulously to deconstruct, brick by brick, the remaining framework of class solidarity and prevent any unity against the bosses. Weakening worker unity is the first step towards Legault’s ultimate goal, an unbridled attack by the bosses.

Such realignment is not unique to Quebec – we have seen it with Matteo Renzi in Italy and Emmanuel Macron in France. But since politics is concentrated economics, this is only the first step in a series of unprecedented employer attacks. Contradictory indicators point to volatility and a deep crisis in the economy, the outcome of which can favour either bosses or people depending on the concrete political developments. It is a question of either supporting this realignment and the accompanying plans of capital, or fighting against capital itself.

Communists have made the choice of class struggle. Legault and the CAQ are not the main enemy – if their re-election is the main danger on October 3, it is because they are the spokespersons of choice for the real main enemy in Quebec, state monopoly capitalism. This is what we must organize against and resist without compromise. To do otherwise would be to support the political realignment in which the center of gravity is moving to the right and the differences between the social democratic “left” and the populist “right” are diminishing. It is precisely this ground that is most fertile for the rise of the far right, especially in a context of economic crisis, war and potential recession.