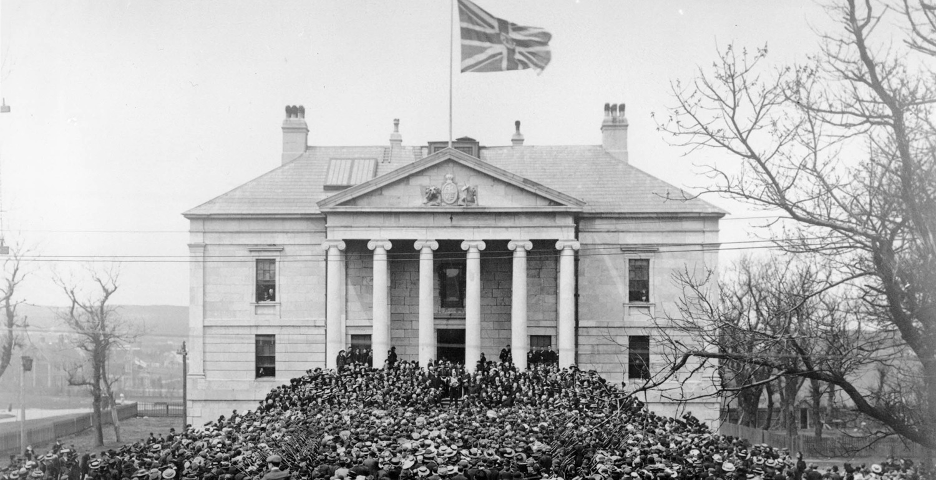 By Ky Rees and Sean Burton

In the early 1930s, the Dominion of Newfoundland was in a deep economic crisis along with many other parts of the capitalist world in the Great Depression. The price of cod, the country’s chief product, had bottomed out and the government was mired in enormous debt due to its enthusiastic contribution of blood and material for the slaughter that was World War I. Given the utter desperation, the workers had little patience left for a government typically headed by and for the representatives of the big merchant firms that controlled the fishery and other interests.

On April 5, 1932 a mass of several thousand workers took to the streets and descended upon the Colonial Building, the rather aptly-named seat of the Dominion’s government. Enraged by allegations of corruption, bribery and fraud rampant within the colonial government, these workers demanded the resignation of Newfoundland’s Prime Minister Richard Squires. When a prompt response from Squires was not forthcoming, some members of the crowd began forcing their way into the building; the assembled members of the constabulary responded with violence, rushing into the crowd and beating whomever they could see. In the aftermath of what has since become known as the Colonial Building Riot, there were numerous injuries and thousands of dollars in damage as rioters broke every window and set ablaze several lavish furnishings inside. The Prime Minister was forced to flee the building under guard and ultimately agreed to have his government dissolved and subsequently was defeated in the follow-up election.

This 90th anniversary of the Riots is an opportunity for reflection on how best to honour the fighting spirit of workers then, as well as the continued class struggle workers continue to fight today. Newfoundlanders and Labradorians – as well as the Innu, Inuit and Mi’kmaw under the thumb of this same ruling class – are facing unsurprisingly very similar circumstances that led to the 1932 Riots: a (neo)liberal government lacking transparency and accountability, a daunting host of austerity measures to be financed by the working class and a bloated capitalist class looking out for only themselves, even as the world around us descends into multiple crises.

Workers have always had the odds stacked against us in this struggle. Against all the resources at the disposal of capitalists, workers have only one weapon with which to finally slay this Goliath: organizing, by using the power of working-class solidarity and the force of our great numbers when acting in unison, the most essential task of any oppressed population in order to escape their shackles. Organizing begins with listening to each other, recognizing on a fundamental level that our united interests exceed any smaller differences between us, while also recognizing that the interests of the bosses and ruling class are impossible to ever fully align with ours. After all, their system relies on our continual exploitation, squeezing as much profit from workers, the public purse and the environment as we allow them. Once these realizations ignite a worker’s consciousness, the task begins to organize with other workers into an organization that can rival the powers stacked against them: whether that be through a small local union, a larger federation, a political party or a worker’s state itself. A worker’s most formidable obstacle is that of their own mind and that of their coworkers. In our workplaces the bosses pit worker against worker, using every means at their disposal to sow distrust between us. Their tactics betray their biggest fear: that we organize together, because we not only outnumber them, but it is we who could make the world truly stand still. Without our brain and muscle, not a single wheel could turn! The wealthy rule only with our cooperation.

What then was the state of organized labour in Newfoundland in 1932? There was some degree of organization for sure, most notably expressed by the Fishermen’s Protective Union (FPU) which had managed to organize over twenty-thousand people (about half of all fishers in the country), built its own community with a newspaper and fish plant and even formed a political party that had several members elected to the House of Assembly. Yet this was no vanguard party, not guided by any particularly clear goal other than guaranteeing the livelihood of the fishers. At best, the FPU’s policies were social-democratic, and like many of those parties it lost considerable credibility during World War I for supporting unpopular measures like the conscription of the very fishermen they were supposed to be protecting. Following the war, the FPU was drawn ever more into “respectable” politics in alliance with the Liberals and gradually faded as a political force. The Colonial Building Riots ultimately failed to bring about the change workers needed, not because the workers were not determined, but because they lacked the organization and foresight to demand more than a simple resignation. They were a group gathered in anger by opportunistic opposition leaders, but without a clear direction. What more could have been made of this had there been a communist party in Newfoundland in those days?

And now here we are, almost a century later, facing a similar set of circumstances with the Moya Greene “Big Reset” austerity threatening what little public assets we have left with privatization, which will come directly from the pockets of the working class. Would it be sufficient to occupy ourselves with demanding that Premier Furey resign? To replace the Liberals with a similarly lackluster party not explicitly devoted to our class interests? What good is smashing the windows and doors of a government building if the end result is just the Liberals and Conservatives switching which side of the House they sit?

Workers and organized labour face the fight of our lives in the coming years. The Riot of ‘32 may not have been a revolutionary moment, but it nonetheless demonstrated the potential power of mass action. The organized working class in Canada have managed to win important gains, wresting them from the grip of the capitalist class and its politicians. We must not be afraid to be uncompromising; no matter how taxing the struggle, we must continue to fight for the better socialist world we know is possible and necessary. We have a world to win, and nothing to lose but our chains.