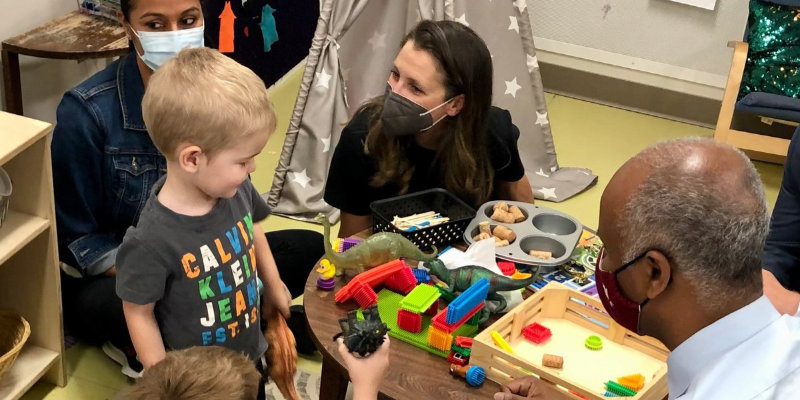 The Economic and Fiscal Update delivered by Chrystia Freeland on December 14 is important, but not for anything said by the Opposition parties or by the media.

“We remain committed to the fiscal anchors that we outlined in this spring’s budget – to reduce the federal debt-to-GDP ratio over the medium-term and to unwind COVID-19-related deficits.”

This sentence is what made the bankers happy, and it’s the “fiscal anchor” that Perrin Beaty, President of the Canadian Chamber of Commerce and former Tory Cabinet Minister was looking for.

That’s a cut of $153.3 billion, which includes a $31.9 billion cut to Employment Insurance benefits and $55.8 billion cut to income supports such as CERB, CRB, sick benefits, care-giving benefits, etc.

It’s also a decline in real dollars in spending on healthcare and social programs, which are already seriously underfunded, as the crisis in hospital and healthcare services has exposed over the last two years. Instead of self-congratulatory verbiage in the fiscal update, the government should have massively increased the Canada Health Transfer, reversed privatization and enforced the Canada Health Act.

Instead of boasting about indexing the GIS and OAS, they should have substantially increased the Canada Pension Plan benefits and cut the full-pension retirement age to 60.

Instead of boasting about indexing the Childcare Benefit, they should have introduced a Guaranteed Annual Livable Income, a $23 minimum wage and committed to start building affordable social housing stock across Canada.

Decreased federal spending is accompanied by increased revenues, including truly speculative – and rosy – projections of GDP growth and economic recovery. This recovery includes an “official” unemployment rate of 7.5 percent in 2021, 6.1 percent in 2022 and 5.7 percent forever after, but with a much-reduced EI fund. Further, the EI top-ups negotiated a year ago by the NDP will disappear, leaving unemployed workers with even less money to pay inflated prices for housing, food, gasoline and home heating.

Projected new revenues from employment and economic recovery, together with funds “saved” from reduced program spending will be used to bring down the deficit, and this is what pleases Perrin Beatty the most.

While some recovery benefits such as the sickness and care-giving benefits have been extended until May 2022, and a leaner income support ($300 per week) is on the books in the unlikely event of a major health “lockdown,” the Big Business supports continue.

And while the report speaks glowingly of 6,000 more small businesses in operation today than before the pandemic, a walk down any main street shows store after store closed, bankrupted by COVID and the recession, and inadequate government supports.

The CEWS program, which has finally ended, was a huge subsidy to Big Business at a cost of over $80 billion. It was used to fatten enormous corporate profits and the personal wealth of the richest corporate bosses in the country.

Yet the newly created Canadian Recovery Hiring Program will continue to subsidize corporate rent and wage bills up to 50 percent until May 2022. The federal budget could extend this even further if the government opts to do that.

The fiscal update suggests no change in direction is in sight.

The $40 billion in funding for Indigenous children – whose education, healthcare and social services have been deliberately underfunded for much longer than the 30 years specified in their lawsuit against the federal government – is the result of a determined struggle by the First Nations Child and Family Caring Society of Canada, along with orders to act by the UN Human Rights Tribunal, serial court orders directing the government to pay and mass public support following the discovery of hundreds of unmarked graves at residential school sites across the country.

The promise of a Canada-wide system of $10 per day childcare made during the election is included in the Fiscal Update. What’s not there is a commitment to build a universally accessible, quality, public childcare system, which is what the public is expecting. In fact, Prime Minister Trudeau has just concluded negotiations with Alberta Premier Kenney, in which they agreed to include private for-profit childcare as part of the package. This means massive transfers of public funds to big box childcare corporations, and not only in Alberta.

What it means for workers is a lot of pain, lower wages and living standards, more unemployment and more precarious work. And all of this is added onto wildly inflated prices of food, fuel and housing, and looming interest rate hikes that will hit hard at homeowners with mortgages and people with credit card debt.

The fiscal update showed that the government’s priorities don’t match the needs of working people for good jobs and increased wages and pensions, or for EI reform that increases benefits to 90 percent of previous earnings and covers all the unemployed for the full duration of unemployment. The government could have projected big increases to the Canada Health Transfer, to address the chronic underfunding of healthcare and the current crisis resulting from COVID. It could have cut military spending by 75 percent and stopped the purchase of fighter jets and warships, using the savings to get women back into the workforce with a universal quality public childcare system, and a public school system that was safe for children, teachers and education workers. They could have helped students by canceling student debt and abolishing tuition. They could have made building affordable social housing stock across Canada a priority. They could have rolled-back prices and rents. They could have addressed the impacts of climate change by nationalizing the energy industry, abandoning pipelines and moving decisively from fossil fuels to renewable energy. They could have implemented the Calls to Action of the Truth and Reconciliation Commission.

Instead, this Big Business government and its corporate supporters will cut spending that is urgently needed to help working people, women, youth, the unemployed, Indigenous and racialized people, to recover from the worst economic crisis in 100 years. It is a crisis that cost 7 million people their jobs and livelihoods, and that is not over for the almost 1 million people cut-off CRB in October, or for the unemployed, or part-time and precariously employed workers, or workers who have been forced back into their homes, or for those who have given up looking for work.

This is the reality the government, supported by the Tories, chooses to ignore.

When the budget comes down in the next few months, the labour and people’s movements must act – this is a minority government that is vulnerable to public pressure. Defunding program spending is a cut to vital services that people need, while diverting funds away from job creation and raising living standards, towards spending on NATO and war preparations, is a crime.

The priorities in the fiscal update are the priorities of the corporations and the military. Working people – the labour and democratic movements, together with the NDP, the Greens, the Bloc and the Communist Party – need to organize to pressure the government to act for a People’s Recovery.

The government has indicated that 2022 will be the year it undertakes EI “reform.” The corporations want to further reduce their contributions to EI, and to further reduce access by laid off workers. They like high unemployment because it forces wages and working conditions down. Expanded EI provides some social security while pressing governments and employers to create jobs and raise wages and working conditions.

Left to the Liberals and Tories, these issues will be settled in the interests of the corporations and the wealthy. The labour and democratic movements need to take joint action now.