There has been some argument among environmentalists about whether the clean energy transition can be achieved entirely on the basis of renewables such as wind and solar or whether it will also require the use of nuclear power. This is one of many vital questions which need to be addressed as we struggle to keep greenhouse gas concentration below 400 parts per million (ppm) and global average temperature rise below 1.5 or 2 degrees by 2100.

On the nuclear question, the consensus in the scientific literature is that non-nuclear climate change mitigation paths are feasible, but would cost somewhat more than paths that include nuclear power. All climate change mitigation paths are expected to be expensive: the Intergovernmental Panel on Climate Change (IPCC) estimates that annual global gross domestic product (GDP) will be 2-10 percent lower by the year 2100 if we undertake serious climate change mitigation than it will be if we essentially ignore the problem. (Specifically, these are the GDP differences between 430-480 ppm scenarios and “baseline” scenarios in which mitigation efforts are minimal and greenhouse gases rise to about 1000 ppm by the year 2100.) Going non-nuclear adds to the GDP loss, but not much: the difference is typically expected to be half a percentage point of GDP.

Of greater concern to scientists is what might happen if some other technologies became unavailable. In particular, biomass energy and carbon capture and storage (CCS) are thought by many to be necessary to keeping greenhouse gases at a safe level.

The bioenergy-CCS combination, sometimes referred to as BECCS, is a favourite of what might be called the procrastinators among the climate modelling community: people who propose doing little about climate change now (either by choice or because they perceive that it is politically impossible) and then making strenuous efforts in the 11th hour. In a trajectory known as “overshoot,” they would let greenhouse gases go above a safe level by late this century and then suck them down to the safe level using BECCS in the last decade or two. The problem with this strategy, besides that it panders to the deniers and is clearly a gamble, is that bioenergy is highly ecologically destructive in its own right because of its enormous use of land. In some scenarios reported by the IPCC, biomass use would be 380 Exajoules (EJ) per year and biofuel plantations would cover 20 percent of the Earth’s land surface. At that level, it is likely that biodiversity loss and species extinctions due to habitat destruction for bioenergy crops would exceed the losses due to global warming. It must be remembered that global warming is not the only ecological problem and in the timeframe of this century at least, not the most destructive one. The rate of species extinction during the last half century or so on Earth has been 50-5,000 times the normal, largely because of habitat loss, and the IPCC itself states that “land use change will continue to be a more important driver [than global warming] of extinction risk throughout the 21st century.”

Sven Teske of the University of Technology Sydney, Australia has presented a pair of relatively progressive climate change mitigation scenarios in his book Achieving the Paris Climate Agreement Goals which is available for free online. The scenarios are non-nuclear, limit global temperature rise to 1.5 or 2 degrees in the year 2100 and use biomass relatively sparingly. The biomass usage in 2050 (the last year for which a biomass projection is given) is only 60 EJ and furthermore is derived entirely from waste – there are no biofuel plantations. The key to these scenarios is rapid deployment: electricity would be entirely from renewables by 2050 (about 83 percent from wind, solar and geothermal as well as 17 percent from hydroelectricity and biomass).

The principal problems with wind and solar power are large materials requirements, large land impact (although they do not use as much land as does biomass or destroy it as completely as does hydroelectricity) and the sporadic nature of their output. The feebleness and inconstancy of the sun in many parts of the world is illustrated in the table below which shows sunlight amounts in southwestern Ontario on a cloudy late-autumn day (and for comparison a sunny day in June). It is apparent that a solar panel just sufficient to fulfil some given demand, X, on the bad day would have to be so large as to have a great overcapacity with respect to X on the good day. This is inefficient in terms of both ecological and monetary cost. The situation is better in places that are closer to the equator, especially dry ones. A solar panel situated in the Sahara Desert instead of Ontario needs only to be about a tenth the size to fulfil with reasonable consistency a given demand for power. 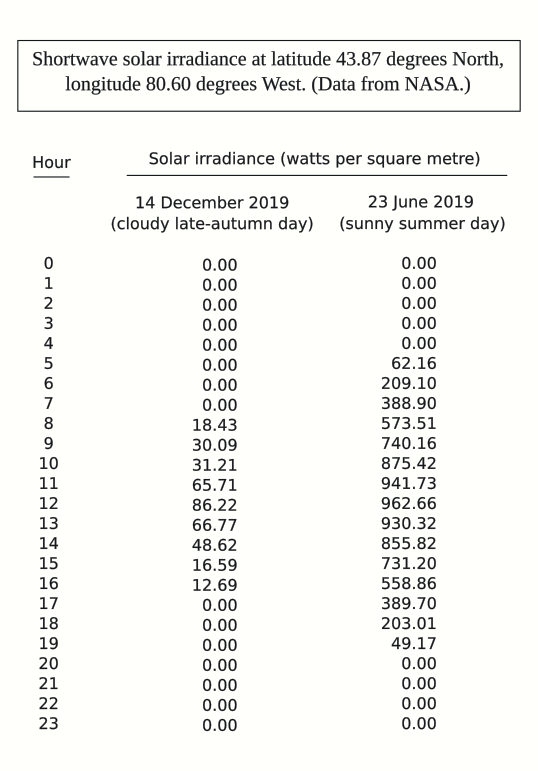 Wind turbine output is also highly variable. A 2011 study from the UK found that in a typical month, there were numerous days and half days during which the contribution of the country’s wind farm fleet to the national electrical grid was practically nil because of lack of wind, even though the wind farms were widely dispersed across the UK. The study’s authors commented that “wind speeds can quite often be low over a whole area the size of the UK: the ‘wind is always blowing somewhere’ argument does not hold even at the level of a medium sized country.” On average over the 26 months of the study, the wind fleet operated at only 24.08 percent of its rated capacity. The graph below of the fleet’s output during a typical month shows the up-and-down nature of wind as an energy source.

The intermittent nature of solar and wind means that if they are to comprise a large portion of our energy supply, they will have to be coupled with energy storage or long-distance electrical transmission technology if they are to fulfil an energy demand profile of the type to which we are accustomed, in which energy is expected to be available whenever we want it.

A key challenge, however, is that there are currently no electricity storage technologies that can provide storage on the scale required.

Next: Part Two – Storage and consumption