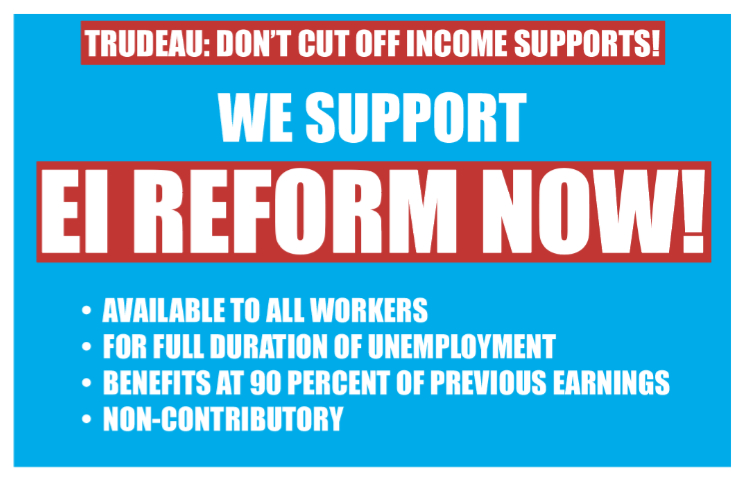 On October 21, Finance Minister Chrystia Freeland confirmed what workers across Canada had feared – the Canada Recovery Benefit (CRB) was coming to an end on October 23.

It wasn’t much of a surprise. For weeks prior, the business press had been clamouring for an end to income supports for workers. Their reasoning was that income supports paid directly to workers were responsible for the labour shortage and were driving inflation. They wielded this two-pronged argument like the Devil wields his pitchfork – cruelly and heartlessly.

Who except a capitalist could even try to argue that CRB payments of $270 per week are a deterrent to a job? If that is the case, then pressure needs to be brought to bear on businesses who expect workers to live on $15,000 per year. But then, that’s precisely the point of sub-poverty income supports, isn’t it? To make unemployed workers so desperate that they will accept low-wage work (and unsafe and non-unionized and without benefits…)?

The second argument, that CRB is driving inflation, is equally ridiculous. According to that logic (peddled by the Tories in the first place), it is poor and unemployed people who are to blame for sharply rising prices for food, gas and home heating, housing and rents. Talk about blaming the victim.

In truth, inflation is being driven by the massive government bailout of capitalism – in the form of the Bank of Canada’s huge buyback of debt from banks and credit companies (“quantitative easing”). Add to this the spiraling military budget – including National Defence’s yearly $25 billion budget plus tens of billions more for fighter jets, naval ships, tanks and other weapons for US and NATO wars.

At the same time that they encouraged the Libs to slam the door on workers, business groups were doing backflips to justify the continuation of government wage subsidies paid to them. The economic recovery, they whined, was simply too fragile to do away with the CERS rent subsidy, or the CEWS wage subsidy, or the LEEFF financing program, or the direct bailouts like the $5.9 billion gifted to Air Canada.

The government dutifully complied with the requests of its corporate masters, ending income supports for workers while ponying up $7.4 billion in supports to benefit business. This, of course, will be paid for by the same workers whose incomes are deemed to be just too high.

If we ever needed a lesson in how capitalism works, there it is.

Today 1.4 million workers in Canada are still ‘officially’ unemployed (the real figure may be much higher) including 800,000 who were dependent on CRB. What they – and all of us – need is permanent reforms to Employment Insurance so that it is available to all unemployed workers for the full duration of unemployment, at 90 percent of previous earnings.

The November 1-15 print issue of People’s Voice – like our October 1-15 issue – includes a full page, bilingual poster calling for exactly that kind of EI reform. We hope readers will put this poster in your window, in your office or on your social media profile, as part of the effort to build a real campaign for livable incomes for all workers.

With the end of CRB, there is no other option but to fight. Otherwise, the only thing workers will receive is the $7.4 billion bill.