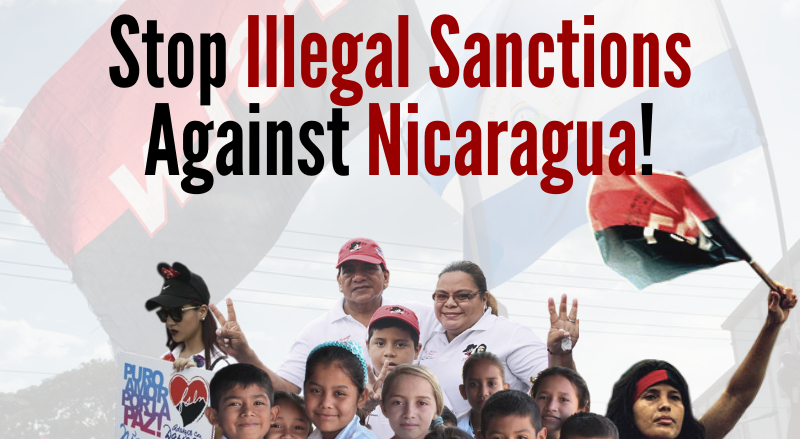 With the federal election behind, Ottawa will be pivoting towards an attack on Nicaragua and may be contemplating increasing its illegal sanctions against the Central American country.

Following Washington’s directives, Trudeau’s Global Affairs will be positioning Nicaragua as an evil spot, in order to soften up Canadians to the idea of a hostile policy towards Cuba down the line – a move which Liberal Party insiders admit will be a deeply unpopular course among Canadians.

Despite mounting pressure from the Biden administration to follow suit on Nicaragua, the Canadian government will likely exercise some caution, or at least iron out its PR campaign, before publicizing its next act of imperialist aggression.

Trudeau’s interventionist policies abroad have become increasingly unpopular following the 2019 coup in Bolivia, which counted on the support of the governments of the United States and Canada, among others. Chrystia Freeland’s failed ‘Lima Group’ was perhaps even more humiliating for Ottawa, garnering wide rejection following its unsuccessful attempts to oust the elected government of Venezuela.

Evidence of the course being taken by Trudeau’s administration emerged just two days after the Canadian federal election, when Canada participated in a virtual event alongside US-aligned Nicaraguan opposition figure, Carlos Fernando Chamorro, and the US State Department’s Brian A. Nichols. The event was also attended by José Miguel Vivanco, Executive Director of Human Rights Watch’s Americas Division, who has put the lucrative ‘human rights’ industry at the service of US interventionist policy.

The result of the September 22 event was a joint declaration issued by Canada, Chile, Colombia, Ecuador, Dominican Republic, France, United States and United Kingdom, alleging the absence of conditions for free and fair elections in Nicaragua and questioning “the validity and legitimacy of the November elections.”

The statement goes on to promote a nearly identical narrative to that which was leveled against Venezuela, during the efforts to oust the government of President Nicolas Maduro in 2014 until the present, under the pretext of democracy promotion. The joint communication urges “the international community to promote the observation of the Nicaraguan electoral process.”

Canada’s Minister of Foreign Affairs, Marc Garneau, announced the latest unilateral coercive measures against 15 additional Nicaraguan officials in July. However, with the US rogue state more visibly isolated than ever, particularly in its genocidal policy towards Cuba, the yankees will all but oblige their northern neighbors to begin to shift away from its Cuba policy, with Nicaragua as a first step.

The imposition of unilateral coercive measures has had a demonstrably negative impact on the human rights of populations in countries where the measures have been applied, and even “targeted” sanctions have ultimately caused harm to average citizens.

Meanwhile, the US Congress is looking to pass the RENACER Act, a piece of legislation which targets the Nicaraguan people with inhumane economic sanctions. With Luis Almagro and the OAS taking the heat for its fraudulent electoral observer mission report and support for Bolivia’s far-right political sectors during the 2019 coup, Washington is now banking on the EU and other neoliberal regimes to be the face of its latest interventionist offensive.

Kawsachun News is the English language service of Radio Kawsachun Coca, the official outlet of the 6 Federations of the Trópico of Cochabamba, the campesino workers unions of which Evo Morales is president.