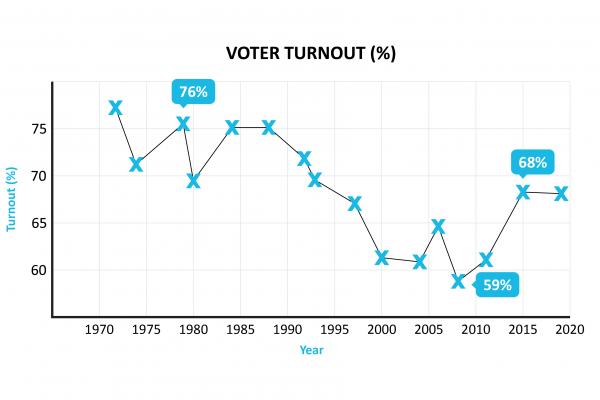 On August 25, ten days after Governor General Mary Simon approved Liberal Prime Minister Justin Trudeau’s request to dissolve parliament, Elections Canada announced that it would not continue the “Vote on Campus” program which provided students with both job opportunities and a simplified process for registration and voting. The justification from Elections Canada was that public health measures and “the minority government situation” prevented it from running the program. The program was initiated during the 2015 federal election and continued in 2019, demonstrably helping lead to a surge in youth voting.

The decision by the Liberal government and Mary Simon – who was appointed by the Queen on recommendation of the Liberal government – to call an election using only the legal minimum amount of time (36 days) in the midst of an ongoing global health crisis does provide Elections Canada with more difficult than usual conditions to do its job. However, with the majority of post-secondary institutions coast to coast returning to in-person studies after an entire school year online, Elections Canada should continue the program.

If it is supposedly safe enough for campus workers, faculty and students to return to in-person studies, it should also be safe enough for Elections Canada to employ students on campus and continue this program which has led to an increased number of young people becoming politically engaged and exercising their rights.

A petition calling for a reversal of this draconian measure and for the full reinstatement of the program has received over 20,000 signatures. The Young Communist League of Canada (YCL-LJC) calls on all democratic forces to mobilize to restore the “Vote on Campus” program and denounce this anti-democratic move by Elections Canada.