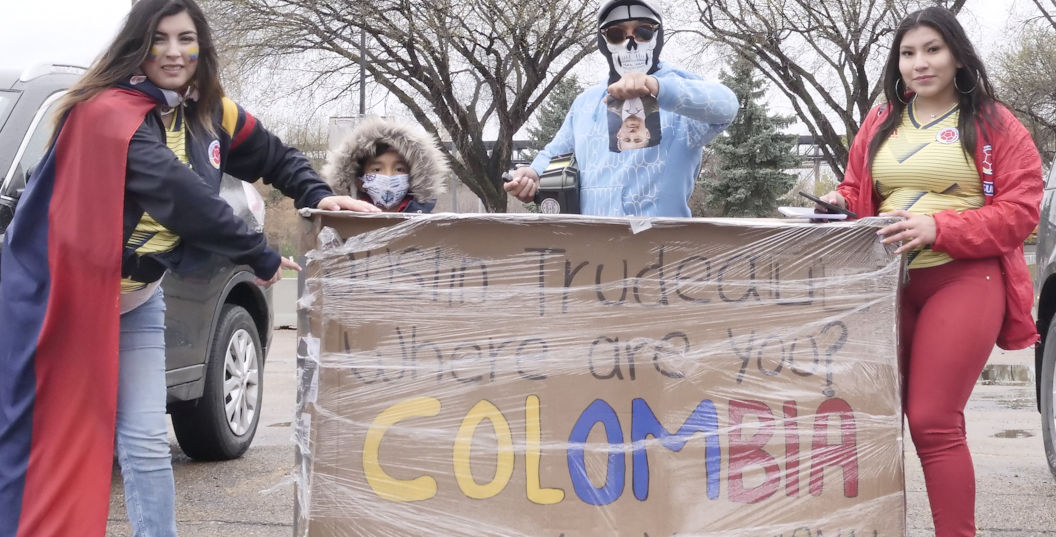 Peace and progressive movements in Canada have called on the Trudeau government to pressure on the right-wing Colombian government of Iván Duque to end its ‘reign of terror’ against the people. The statement was signed by the Colombia Working Group, Common Frontiers, Canadian Latin American Alliance, the Canadian Jesuits International, the Canadian Peace Congress and others. Since this statement was released, there have been more victims of state violence – as PV goes to press, 50 people have been reported killed and 1000 missing.

Over the recent period, hundreds of thousands of Colombians have taken to the streets in peaceful anti-government protests to challenge a neoliberal austerity tax reform bill proposed by the right-wing government of President Iván Duque. The government sought to impose tax hikes that would disproportionately impact the poorest people by eliminating subsidies on some public services, taxing pensions, and freezing public sector wages for up to five years as a way to mitigate Colombia’s economic crisis.

The Colombian government has responded with shocking levels of repression by deploying the military against a civilian population. Military soldiers alongside police have engaged in systematic human rights violations with NGOs claiming the armed forces fired at civilians. The anti-riot squad (ESMAD) and Colombian Armed Forces have killed at least 26 protesters, committed 1181 cases of police violence, and committed 988 arbitrary detentions. More than 471 people have been reported missing in Colombian between April 28-May 5.

The government undertook further anti-democratic actions by suspending the right to public protests making it illegal to protest government policies and to partake in May Day celebrations.

Although the tax reform sparked the protests, demonstrations have continued even after Duque withdrew his controversial tax proposal. The repression witnessed over the past couple of days is nothing new for Colombians. Colombians have protested on and off since November 2019 after years of dissatisfaction with government policies, falling living conditions and state repression. According to the World Bank 45-47 percent of Colombia’s 50.3 million people live below the poverty line.

Social movements in Colombia have declared that genocide is being carried out against them with the complicity of the state. In 2021 alone 35 massacres have been carried out according to local conflict watchdog Indepaz. Some Indigenous movements are calling for the resignation of President Iván Duque.

In August 2020, the United Nations System in Colombia and United Nations Verification Mission in Colombia issued a joint statement “expressing concern at the occurrence of massacres and the continuous killings of human rights defenders, social leaders, and former FARC-EP fighters.” Since the Havana peace accords were signed in 2016, 1146 social leaders, human rights defenders, and demobilized members of the FARC have been assassinated.

Canada has a responsibility to speak out due to its strong political and economic ties with Colombia, given the signing of a contentious bilateral free trade agreement in 2008. Since then, trade between the two countries has flourished. Moreover, Colombia has become an important destination for Canadian corporate investment particularly in the extractive industry that has led to increased social conflict in the country, including the displacement of Indigenous peoples. As a key ally to the Colombian government, Canada has a responsibility to address the rampant violence unleashed on the population.

In 2019 alone, two-way merchandise trade between the two countries totaled $1.8 billion. This year, Colombia and Canada celebrate the 10th anniversary of their free trade agreement. Colombia has become the 5th largest recipient of Canadian investment in Latin America and the Caribbean.

We call on Prime Minister Trudeau to follow the lead of other world leaders in unequivocally condemning the violence in Colombia and to call on the Government of Colombia to: