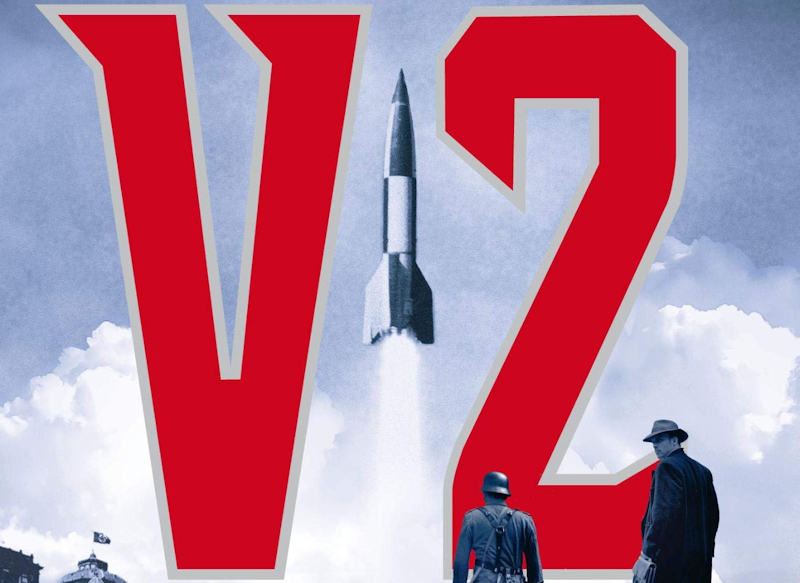 A central character in Robert Harris’s V2 is non-fictional: Dr. Wernher von Braun was the charismatic, Nazi engineer who headed the scientific team that designed the world’s first rocket-propelled ballistic missile. Called the V2, the rocket was capable of rapidly ascending 80 kilometres to the edge of space before its one-ton warhead descended at supersonic speed to obliterate targets, mainly in London and Belgium, in 1944-45.

In late 1942, von Braun persuaded Hitler to fund the development of “vergeltungswaffen” (“revenge weapons”) – the V1 pilotless flying bomb and the V2. At the time – with the US entry into the war and following Germany’s major defeat at Moscow in 1941 – Hitler apparently decided that V-weapons aimed at London could finally force Britain to accept an armistice which would free Nazi forces in the West to be re-deployed against the USSR.

A fictional character in V2 is Dr. Rudi Graf, a rocket scientist whose vision of space travel is perverted by Nazi/military use of rocketry and by his discovery that slave labour is used at Peenmünde, the Baltic seaside base where the V-weapons were developed. Harris makes it clear that von Braun and other German rocket scientists were complicit in Nazi war crimes, which included the deaths of an estimated 20,000 enslaved labourers producing V-weapons at an underground site at Nordhausen in Thuringia.

Graf encounters Femke, an 18-year-old Dutch girl forced into prostitution at a brothel for officers near V2 sites in Belgium. Femke works for the Dutch underground. For Graf, she is not a sexual object, but a conduit to the underground and to the British military. Hoping to shorten the war, he tells her that if the British want to stop V2s, they should bomb the liquid oxygen fuel plants and the rail lines used to transport it to launch sites.

In reality, Allied bombing raids against liquid oxygen plants and the rail lines to Peenemünde were carried out, but they did not significantly impede V-weapon launches.

Another fictional character is Kay Caton-Walsh, a Section Officer in the British Women’s Auxiliary Air Force. After surviving a rocket strike on central London, she is sent to Belgium with other WAAFs who are tasked with quickly calculating V2 trajectories so that RAF fighter-bombers can attack launch sites.

Lord Cherwell, Churchill’s scientific adviser, consistently underestimated the threat posed by Hitler’s V-weapons and attempted to withhold intelligence assessments of their threat from American military authorities. Cherwell and others noted that the one-ton warhead of a V2 was insignificant in comparison to the 7-10 ton bombloads carried by each of the hundreds of 4-engine RAF bombers that pounded German cities during night raids. British military authorities speculated that V2 warheads might be modified to spread chemical-biological agents in British cities and among the Anglo-American-Canadian forces poised to invade France in 1944. Chemical-biological agents were readied by the Western Allies and the Soviets for retaliation against Germany in case such agents were used by Hitler’s forces. After the war in Europe ended, these agents prepared for retaliatory attacks on Hitler’s Germany required disposal. They were dumped in the seas near the Baltic states and Scandinavia and are still dangerous.

In the novel, von Braun and a contingent of rocket scientists give themselves up to US forces in 1945. They are interviewed in Britain by scientists and military officers. During interviews with scientists and military officers in Britain, Graf meets Kay and is astonished to learn that central London has not been devastated by V2 strikes, as Nazi propagandists claimed. Kay, in turn, is astonished to learn that WAAF attempts to locate launch sites by calculating V2 trajectories failed completely. These revelations reflect the real question of whether Hitler himself believed the false claims of Nazi propagandists that central London had been totally destroyed.

Harris’s fictional characters are rooted in actual events. The US Joint Chiefs of Staff authorized Operation Paperclip to bring German rocket scientists to the United States, where they played central roles in developing the US space program. At the novel’s conclusion, it is unclear whether Rudi Graf will join von Braun’s contingent of rocket scientists being transported to the US to become the nucleus of its space program, irrespective of their complicity in Nazi war crimes.

After the German surrender in May 1945, surviving V2s fell into the hands of British, American and Soviet forces. While serving as a WW2 intelligence officer, Canadian author and environmentalist Farley Mowat “appropriated” a V2 from British military control, disguised it as miniature submarine and arranged for its shipment to Canada.

The real-life von Braun eventually became head of the US moon rocket programme, associating with such luminaries as Walt Disney, President Kennedy and President Johnson. His Nazi past was largely overlooked in the West, except by the mathematician/comedian Tom Lehrer whose song “Wernher von Braun” included the line, “Call him a Nazi, he won’t even frown/’Nazi, Schmazi,’ says Wernher von Braun.”

Operation Paperclip also scooped up Arthur Rudolph, one of von Braun’s colleagues who was a fervent follower of Hitler and joined the Nazi Party in the early 1930s. In 1983, he was stripped of his US citizenship and deported to West Germany after admitting he had “participated under the direction and on behalf of the Nazi government of Germany in the persecution of unarmed civilians because of their race, religion, national origin, or political opinion.” A West German court cleared Rudolph of war crimes after the US Department of the Army refused to provide documents that incriminated him.