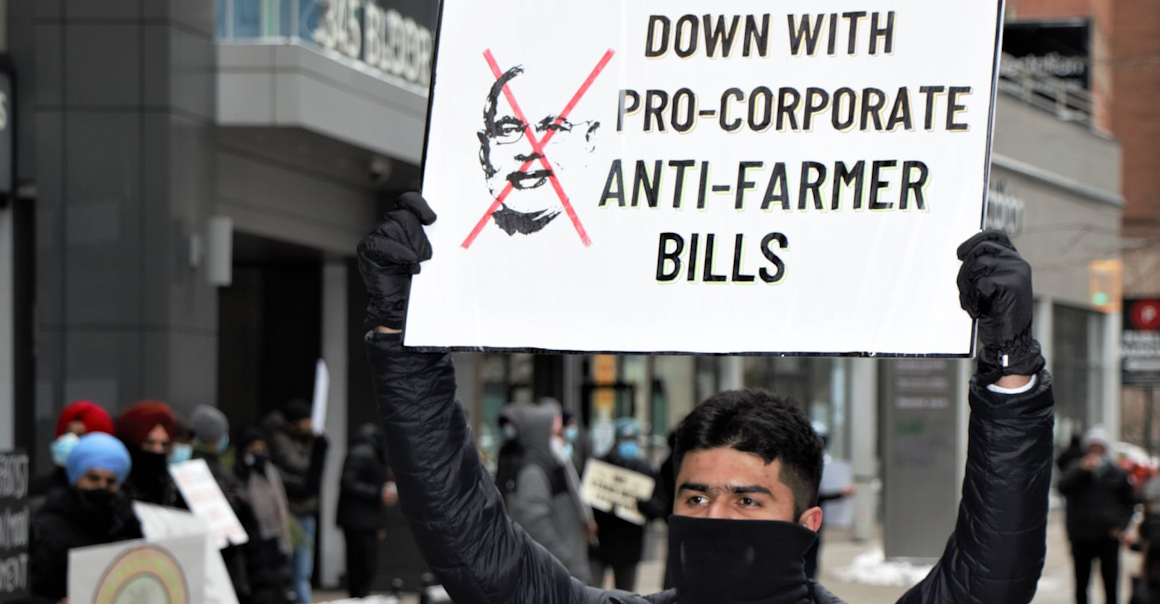 Farmers in India are fighting a historic struggle for their very survival as farmers. Under cover of the COVID crisis, the far-right government of Narendra Modi passed three pro-corporate agriculture bills which hand control of the sector to monopolies like Ambani, Adani and other multinational domestic and foreign agribusiness firms.

These laws mean that, for the first time since India’s independence from British colonialism, big corporations will be allowed to encroach into agriculture and achieve super profits.

Indian agriculture is crumbling under neoliberal policies, which were introduced in 1991. The peasantry was able to survive throughout all the years since, but the current laws introduced by Modi will remove whatever lifeline is left for them. These policies are pushing agriculture into a deep crisis – in 2019 alone, more than 40,000 farmers died by suicide in the context of agriculture-related debts and other difficulties.

The global capitalist economy is gripped in recession and the neoliberal trajectory has exposed itself as a total failure for solving this crisis. In response, the capitalist class is intensifying its effort to maximize profits; hence, it is seeking new areas of economic activity and markets. The new agriculture laws will allow corporations to control agricultural production, purchasing, storage, marketing and procurement. They will dismantle the Minimum Support Price (MSP) mechanism which guarantees prices for many crops and will privatize public places (known as mandis) where farmers bring crops and government agencies buy them. Corporations will be allowed to open private mandis, buy and hold food grain stocks, and have long-term farm leases. Large-scale contract farming will be allowed. It will be the corporations who decide what crops will be grown, seed type and all other decisions related to agriculture production and sale.

This will seriously jeopardize India’s food security, by creating artificial shortages of food grains while facilitating a massive rise in prices and dismantling the public distribution system.

Farmers will become mere corporate employees. If there is a bad crop or the company refuses to purchase, it will be the farmer who bears the loss. But they will not share in the higher profit if there is a good yield. Farmers cannot go to courts to challenge corporations for any loss, fraud or other issues. They can only rely on local magistrate to hear their complaints.

The reforms will not only devastate farmers, but consumers as well. They allow corporations to hold crops, to create a supply shortage and increase prices. The government can intervene only if the price increases by 100 percent or more.

Farmers’ organizations began their protest as soon as the bills were presented in parliament. As local protests grew stronger, organizers issued a November 26 call for a peaceful march on Delhi, right after the historic general strike by 250 million Indian workers. During the march, they faced water cannons, blockades and police attacks. For over a month now, farmers have blocked major Delhi highways, including all national highways entering the region. As farmers from neighbouring states join every day, the number of protesters continues to grow. It is a remarkable display of their determination to achieve their demands.

This has become a people’s movement, attracting all sections of society. This historic movement is a great challenge to the economic order which puts corporate interest ahead of people’s needs. Modi’s government and its fascist allies have tried to defame the movement by labelling farmers as Khalistanis (Sikh separatists), Pakistani or Chinese agents, or Naxals (Maoist movement that the government designates as terrorist). But these slanders are all in vain – the fact remains that this movement is organized and conducted by a united front of more than 500 farmers’ organizations from all over the country.

The movement is growing every day and has been successful in uniting different sections of society. It has built confidence among the masses that through unity and struggle this reactionary government and their corporate policies can be defeated. There is hope that this historic movement will build the unity of workers, farmers, youth and women, to win an economic system which puts people’s needs ahead of corporate greed.

The Modi government has become the prime agent for the consolidation of the ruling classes in India and implementing reforms which serve corporate interests. All who oppose corporate control of agriculture must stand in solidarity with India’s farmers and promote farmer-worker unity.