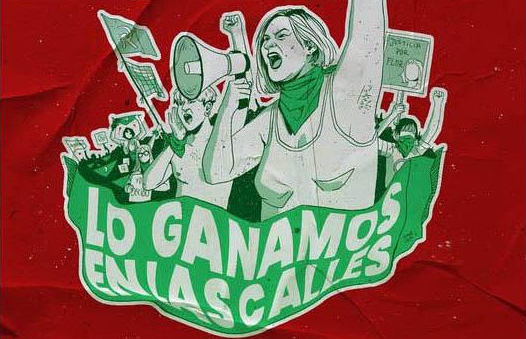 Legal, safe and free abortion is law in Argentina, after the Senate assented to a pivotal struggle for the country’s feminist movement. Now the fight will continue for its effective implementation.

The Senate approved the Voluntary Termination of Pregnancy law with 38 votes in favour and 29 against, in a day that began at four in the afternoon on December 29 and closed at four in the morning on December 30. As a result, the President may now advance with a project that, since the return of democracy, has been the flagship of the feminist movement which filled Congress with a “green tide” that flowed throughout the country.

At 4:12 in the morning, the 38 votes in favour finally ratified what seemed an irreversible trend since eleven the night before. In the words of Senate President Cristina Fernández de Kirchner, “the green celebration is a union of shouts and hugs.” Key to the Senate vote were the undecided members such as Lucila Crexell, Oscar Castillo, Stella Olalla, Edgardo Kueider and Sergio Leavy, who ended up voting for the law.

Now, for the first time since Argentina’s Penal Code was passed, the practice of abortion until the 14th week of pregnancy will be decriminalized. Each year, an estimated 350,000 – 500,000 clandestine abortions are performed. Getting out of that situation and having the State support women and pregnant people was the main argument for yes votes. The abortion rights movement was stronger than during the previous effort in 2018, having begun in February with a green bandana campaign that promoted the demand for a new law in 2020.

“This was the first triumph in a battle that began decades ago in our country. Yesterday, militancy and collective strength won, and today Argentina is more just because the State is taking responsibility for guaranteeing us the right to health and a full life,” said Guadalupe Viñuela Flores, a member of the national secretariat of the Communist Youth Federation (FJC).

“The struggle continues to win a comprehensive public health system through which girls have access and information to know what their rights are. We will continue to fight for compliance with the ESI [National Comprehensive Sex Education Program] and we know that the battle immediately before us has to do with the regulation of this law, with the same impetus that we had for its passage,” added Flores, who is also member of the University Movement of the Left (MUI) at La Plata National University. “This triumph also began when we managed to remove the right wing government after four years of fighting in the streets. There we began to build this victory that we continued to drive forward this year so that it becomes law.”

Oriana Durán, a member of the FJC from Buenos Aires, remarked that “historically, communists have fought for the rights of working women and that is what we are achieving for pregnant women’s bodies, fighting in the streets for a right that we need. Our focus was clear – it is not about abortion yes or abortion no. It is about getting out from hiding underground, condemned to death through state neglect.”

“That is why we always say that abortion is a question of gender and class, since the rich can do it but the poor die underground. We have achieved a historic victory and we will continue to fight for its implementation.”

Republished from Nuestra Propuestra. Translated from Spanish by PV Staff.