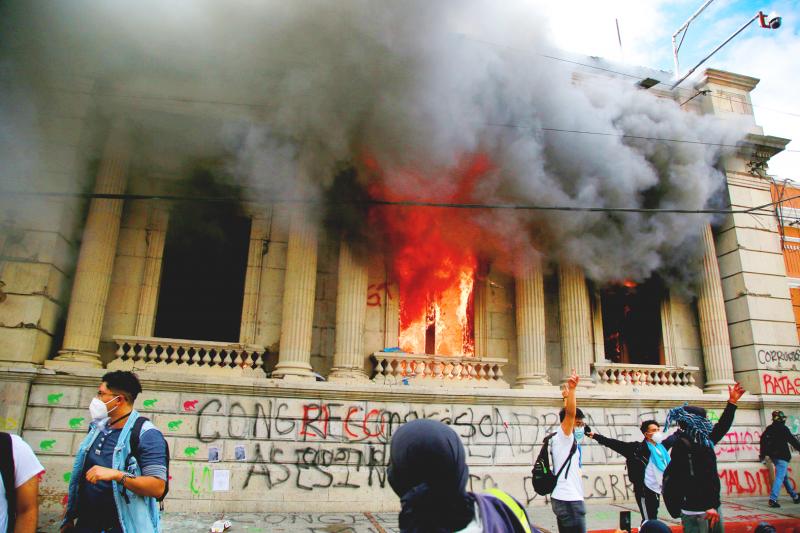 In the early morning on November 18, with a complete lack of transparency, the ruling party and its allies passed the 2021 National Budget. On the same day, they approved a preliminary trial process by the Supreme Court of Justice against two judges of the Constitutional Court. In so doing, this corrupt pact fulfills its shameful purpose of delivering a huge corporate-friendly budget and undermining the last judicial body that refuses to bow to its demands.

Our caucus in Congress, consistent with our principles, participated in the budget process by presenting own proposals and those of various social sectors. These were not taken into account, so we did not vote in favour of the budget.

With the three powers of the state infested with corruption and bent to the interests of parallel power groups, there is no possibility of justice or struggle against corruption and impunity, other than protest and social resistance, under the protection of Article 45 of the Constitution.

History shows that when political and institutional spaces become closed as channels for social demands, social rebellion legitimately follows and brings with it instability and conflict such as our country has already experienced and does not want to repeat. However, these spaces have already been closed, so the only path left for the people is that of social protest.

As a result, the Guatemalan National Revolutionary Unity calls:

For our militants, bases and structures to reaffirm our position on the side of the people and to join all forms of social protests that have been provoked by Congress’ approval this unpopular budget which is harmful to the interests of the country.

For the Guatemalan people to organize and demonstrate their rejection of the recently approved 2021 National Budget and all prevailing forms of corruption and impunity.

For the Guatemalan government, Congress and Supreme Court of Justice to cease their attacks on the justice system, as well as their actions which corruptly favour the interests of power groups parallel to the state.

For President Alejandro Giammattei to veto the decree approving the 2021 National Budget, and commence a process to formulate an inclusive budget focused on national reconstruction and the demands of social sectors that have been marginalized and affected by the COVID-19 pandemic and recent natural disasters.

Translated from Spanish by PV staff