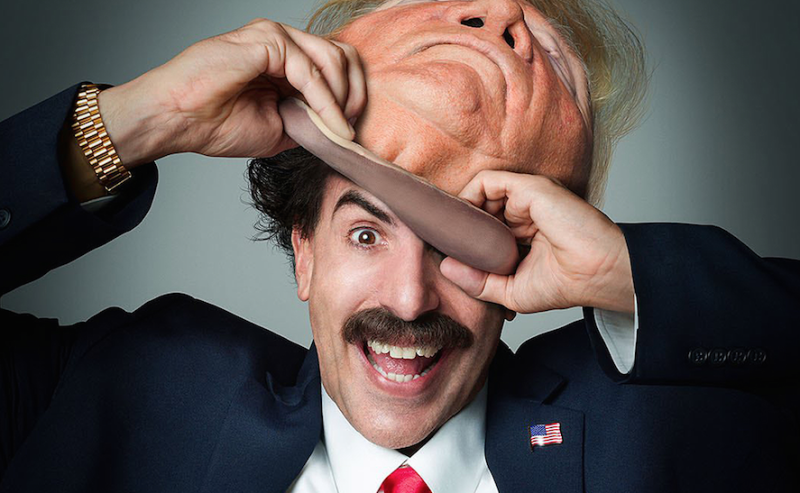 With the original Borat (2006) film, Sacha Baron Cohen created the controversial fictitious character of a reporter from Kazakhstan who travels to the US to learn about America. Borat is an anti-Semitic, homophobic and misogynist person whose deadpan manner suggests that he celebrates extreme and reactionary views. Much of the dialogue in the 2006 film and its 2020 sequel is triggering for many people.

Defenders of the films argue that Borat’s character is deliberately this way in order to expose the oppressive nature of mainstream American political and social discourse. Part of this effort to undermine oppression is that Borat speaks in Hebrew (which most audiences assume to be Kazakh) throughout the film, including when presenting his anti-Semitic views.

It is an ongoing debate as to whether humour like Baron Cohen’s is successful at deconstructing bigotry and reaction, or simply reinforces it by presenting it in a funny way. Recognizing these questions, this reviewer leans toward the former view.

In the sequel – the full title of which is Borat Subsequent Moviefilm: Delivery of Prodigious Bribe to American Regime for Make Benefit Once Glorious Nation of Kazakhstan – Borat again travels to the US, this time to give (literally) his apparently 15-year-old daughter to US Vice-President Mike Pence in order to improve his country’s standing. He even makes it onto the floor of this year’s Conservative Political Action Committee (CPAC), where his daughter speaks of dreaming of becoming the “next Queen Melania (Trump).”

What makes the film hilarious – and sometimes cringeworthy – is the utter honesty revealed by reactionary people whom Baron Cohen pranks. So, when Borat’s daughter meets with women coaches to learn to “sugar baby” debutante, they teach her to be submissive to a prospective husband. The reactionary and misogynist nature of conservative culture is clearly depicted here. The duo also visits a conservative-run “Crisis Pregnancy Centre,” which only counsels women against having an abortion. Counsellors even assert this in cases of incest, declaring, “God doesn’t make accidents.”

Borat Subsequent MovieFilm also talks about the fact that social media is often ripe with fascists.

The film was made in 2020, so the COVID-19 pandemic features prominently. Following the example of Trump, reactionaries call COVID the “Chinese virus” and express their belief that “The Democrats” pose more of a threat to America than the pandemic. Borat also meets QAnon supporters and stirs up anti-vaxxers in a scene involving a caricature of Dr. Anthony Fauci and a “Karen” who shoots him.

One of the film’s pranks that has generated a lot of attention involves Trump lawyer Rudy Guiliani, filmed in a compromising position with Borat’s daughter.

For people who appreciate satire, Borat Subsequent MovieFilm will be fairly entertaining.  Having said that, however, the original film stirred quite a backlash among people from Kazakhstan, which is presented as quite oppressive and as a real backwater. This film is not different than the first one in this regard.