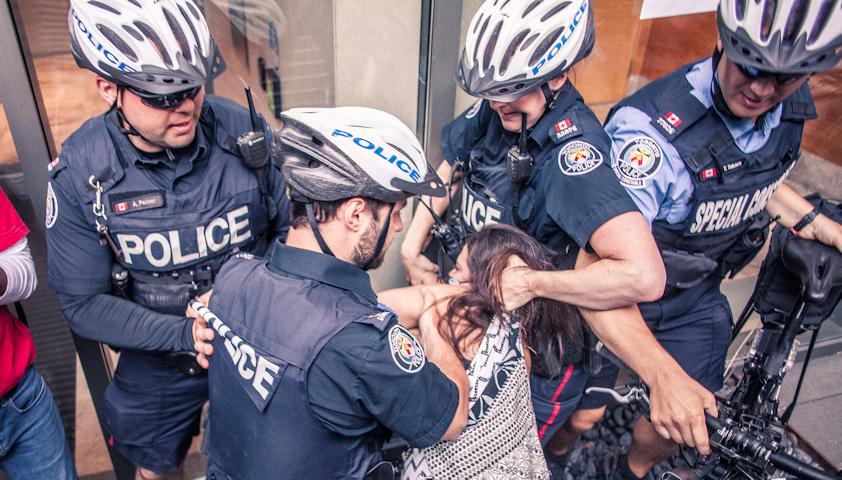 At a time when Indigenous and Black communities and anti-racist activists have shone a critical light on police budgets and practices across the country, it’s pretty shocking to learn that oil corporations have been gifting police forces with money to purchase militarized equipment.

At least $7.9 million has been funneled into private police foundations, particularly to those in Alberta, from Big Oil. This money flies under public scrutiny and is typically not included (or reported) in publicly-available police budgets.

Police foundations exist in many areas of the country and provide a conduit for private companies and individuals to give money directly to police departments. It’s a questionable practice, to say the least, and one that is not restricted to municipal police: the RCMP Foundation was established in 1994, partly with assistance from Disney Corporation. , and  receive funds from private police foundations, which enables private companies to give money to police forces through these foundations.

While any private and “arms length” funding of police is concerning and should be opposed, the financing from oil corporations is particularly alarming. As resistance to resource extraction projects grows, particularly from Indigenous nations and environmental movements, Big Oil has increasingly called for police intervention against peaceful protests. The RCMP invasion of Wet’suwet’en land last year, to overpower Indigenous resistance to the Coastal GasLink pipeline, was in the direct interests of oil giant TC Energy (who is building the pipeline) and LNG Canada (who is building the terminal). TC Energy is a regular annual donor to the Calgary Police Foundation (which has received millions of dollars from Big Oil), while LNG Canada has donated and estimated $25,000 to the Vancouver Police Foundation and has representation on the foundation’s board.

A report from the United States suggests that police foundations are a key method to bypass accountability for overall police budgets. This enables police forces to purchase equipment and weapons for which they would otherwise face widespread opposition. In the US, fossil fuel corporations specifically target funding to police organizations in Black communities in major cities. It’s effectively a P3 structure that helps finance the climate crisis, racism and police brutality.

The Council of Canadians has initiated a campaign to stop Big Oil’s funding of police forces in Canada, including a petition calling on Minister of Revenue Diane Lebouthillier to take action to stop the practice.

The financial and organizational connection between corporations and police forces highlights the need for increased and strengthened civilian oversight of police across Canada. This must include slashing police budgets, demilitarizing police forces and disarming most police units, and abolishing the RCMP, CSIS and the Communications Security Establishment (CSE). Furthermore, undemocratic legislation that targets dissent – like the federal “anti-terrorism” laws and Jason Kenney’s bill to protect “essential infrastructure” – must be revoked.