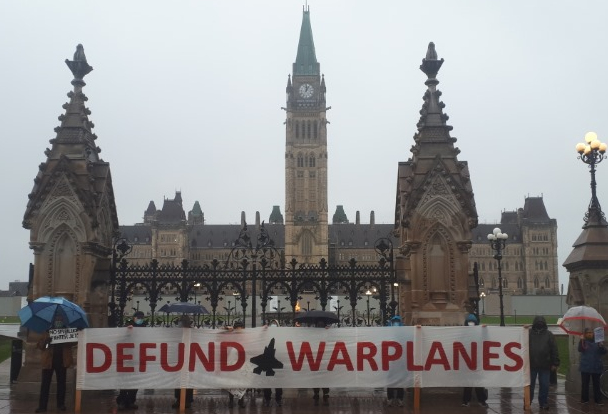 On October 2 Canadian peace activists held their second pan-Canadian Day of Action against the purchase of 88 new fighter jets. At some locations activists also underscored their objections to the purchase of 12 armed drones at a projected cost of $5 billion. The activists delivered letters to 27 Members of Parliament opposing the purchase of these killing machines and urged actions for peace, protecting the environment and a just economic recovery.

The October 2 Day of Protest, like the July 24 Day of Protest, was spearheaded by Canadian Voice of Women for Peace and allied peace and solidarity organizations. October 2 was also the International Day of Non-Violence named in honour of the birth of Mahatma Gandhi on October 2, 1869.

At some of the protests at the offices of Members of Parliament, peace councils affiliated with the Canadian Peace Congress handed out a leaflet prepared by the Congress executive. Referring to the reasons for the purchase of the fighter jets they stated, “the true purpose is to prepare for war against the people of Russia, China or any other country unwilling to comply with demands coming from the US empire.” They also referred to Canada’s membership in the “aggressive NATO alliance which still operates on the dangerous premise that it can start and win a nuclear world war.” The Congress leaflet also pointed out that “Canada has participated in NATO wars of destruction against Yugoslavia (1999), Afghanistan (2001), Libya (2011) and Syria (2011).”

The leaflet concluded by urging its readers to take the threat of a Third World War seriously; to join a local peace council or group and participate in building a strong and engaged Peace Network across Canada.