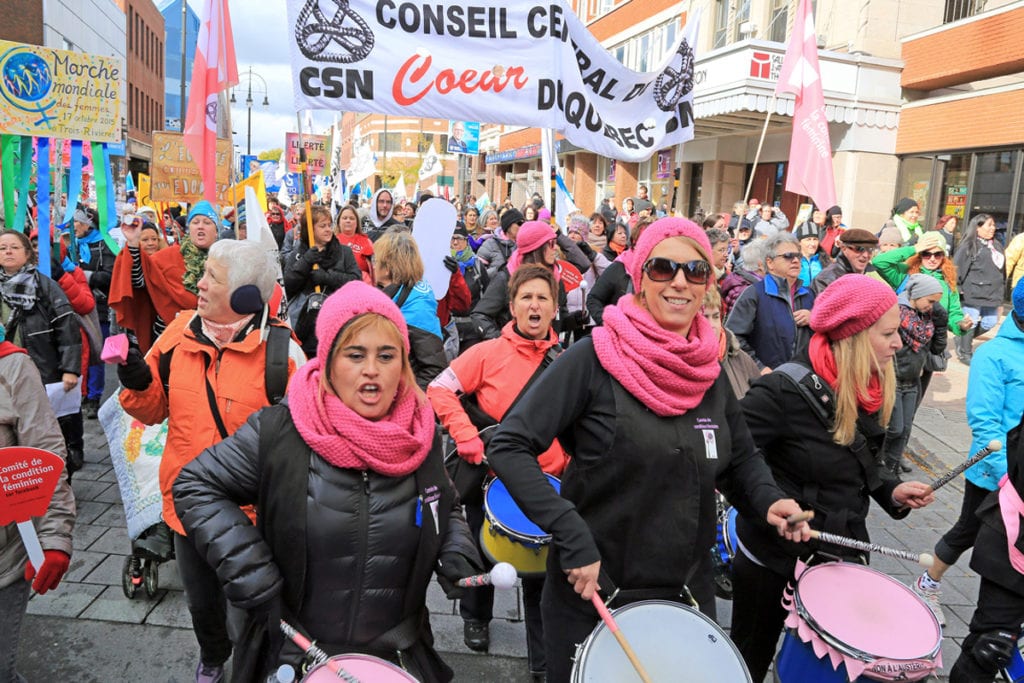 This year, the World March of Women celebrates its 20th anniversary. This huge global action in the name of women’s rights was initiated in Quebec by the Fédération des Femmes du Québec (FFQ), whose then president was Françoise David, former MNA for Québec Solidaire. Since the first march in 2000, every five years millions of women around the world march together against poverty and violence.

The precursor of the World March of Women was the 1995 Bread and Roses March, a 200-kilometer women’s march against poverty that the FFQ organized in the aftermath of a new economic crisis of capitalism. The name refers to the 1912 strike of 20,000 women textile workers in Lawrence, Massachusetts. For ten days, more than 800 Quebec women march from Montreal, Longueuil and Rivière-du-Loup to Quebec City.

This mobilization occurred at a favorable political moment, as the newly elected Parti Québécois government sought to rally women in favor of the referendum on Quebec sovereignty. As a result, the demands of the marchers found an echo in parliament. Following Bread and Roses March, the government created several hundred social housing units, invested in social programs, adopted legislation on pay equity and automatic collection of support payments, reformed the law on immigration to reduce sponsorship time and raised the minimum wage by 45 cents. The minimum wage increase was much less than what women were demanding, but the increase was still the largest in the previous 20 years.

Women take to the streets around the globe

Shortly thereafter, the FFQ decided to reoffend. But this time its activists wanted to march with women around the world to mark the new millennium. The FFQ’s daring idea of ​​a huge global march was quickly greeted with enthusiasm – the world must change! So, on March 8, 2000, the World March of Women began with the participation of feminist groups, unions and community organizations from 161 different countries. Women around the world took turns, marching in a relay fashion, and ended their journey outside UN Headquarters in New York City on October 17, the International Day for the Eradication of Poverty. To mark the end of this historic mobilization, there wee large rallies at the same time in hundreds of cities. In Montreal, 40,000 women and allies took to the streets to cry out loud and clear that they had had enough of patriarchy, violence and poverty.

Ironically, when Françoise David and her comrades delivered the World March’s demands to the UN, they were met only by men.

In Quebec, this first mobilization of the World March of Women did not have as much of an impact on the legislative agenda as the Bread and Roses March. The government refused to make any commitment whatsoever against poverty. The most lasting effect of the World March has been to create a broad network of solidarity among women’s groups around the world and to build bridges between the global “North” and “South.” Quebec feminism was then opened to internationalist demands and to the realities of their sisters around the world.

In an interview at the time, Françoise David explained how this movement contrasted the “catastrophic effects of globalization on all populations of the planet, particularly on the peoples and women of the South. The economic measures defended by the IMF and its allies are not neutral because it must be recognized that ‘poverty has a gender.’

“Globalization is unfair, racist… and even sexist, because it affects women hard. That’s why we challenge world disorder and patriarchal ideas. To be a feminist in the year 2000 is to take part in social movements that fight for social justice.”

Despite different national realities, there is a consensus among women. When they talk about violence, they are not only talking about the fight against domestic violence, but also violence against women from the state and from imperialism. This is why the World March of Women is also a movement against war, for demilitarization, against racism and exclusion. Women are combining forces in the defense of Indigenous sisters whose national rights are violated everywhere on the planet, including in Canada. They are building labour unity for better working conditions and uniting with the environmental movement against the destruction of nature. The living conditions of women are the living conditions of the majority, and their demands are also those of the working class and oppressed peoples.

Although the World March of Women is not openly anti-capitalist, its demands reflect the concrete living conditions of women and make it a movement in direct opposition to this system. Women have no interest in capitalism.

Just because we aren’t marching, doesn’t mean we don’t exist!

The 5th World March of Women occurs in the midst of the second coronavirus wave, when governments’ economic stimulus plans are aimed mainly at men because of the economic sectors targeted. But, it is women who have borne the greatest burden of the pandemic because they hold the majority of jobs in services, health and care in general; because they have the most precarious jobs and are the first to be fired; and because even today, it is mainly women who are responsible for the family and who have to deal with the closure of daycares and schools. Add to this that the rise of the far right in recent years has, unsurprisingly, matched the decline in women’s rights around the world.

This is why, despite the pandemic, women continue to mobilize for the World March of Women. So far, regional coordinators are not organizing rallies of thousands of women, but several actions will take place and smaller gatherings are also planned. In Montreal, an action will be held on October 15 in front of François Legault’s office, to conclude a letter writing campaign. There are also plans to extend the mobilization after October 17 so that the 5th World March does not go unnoticed during the health crisis.

There is still a long way to go to achieve real equality, but women are far from out of breath.