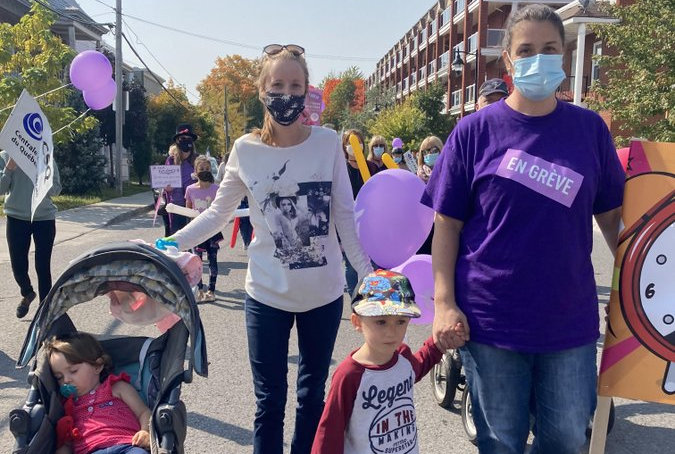 Home-based day care workers in Québec are fighting to bring up their wages and see their crucial work properly recognized and respected by the provincial government and Québécois society as a whole.

10,000 home-based day care workers affiliated with the Centrale des Syndicats du Québec (CSQ) declared an unlimited general strike on September 21 after what they judge to be bad faith from the government at the negotiation table. Another 3,200, represented by Confédération des Syndicats Nationaux (CSN), held a 24-hour strike on September 24. At press time, the CSQ announced it had reached a tentative deal.

Québec’s publicly funded, nearly universally accessible childcare system is correctly lauded and envied by people across the country, who don’t have access to such a valuable public service. Indeed, the system – which provides childcare based not on the family’s income but rather on the social good of having respite for parents and caregivers and providing more opportunity for women to enter the workforce – is a huge victory for Québec’s working class.

Of course, it is not without its faults.

The system is a hybrid of many different types of institutions, including public day care centers, subsidized and non-subsidized private day care centers, and home-based day cares. The latter represent a network of roughly 12,000 homes which take care of between 6 and 9 children every day. The government reaps the benefit of these thousands of individual women (they are almost exclusively women-run) providing publicly-funded childcare spots for around 40,000 children, without having to provide any infrastructure. But the workers are fed up and need better pay and working conditions.

On June 18, CSN-affiliated home-based day care workers went on a one-day strike to show their strength and solidarity to the provincial government, which is stonewalling them at the negotiation table. During the week of September 14-18, rotating strikes took place on a regional basis across the province. Striking is hard for these workers; they have daily dealings with parents who know them, count on them and must make special arrangements during these work stoppages. They also work long days alone, and therefore cannot cultivate the same feelings of solidarity and struggle with their union comrades that others do in shared workplaces. Despite this, they have maintained a steady stream of pressure tactics and strike actions.

Over the last year and a half, very little progress has been made on core demands despite some unspecified concessions by the workers. They want pay parity with day care workers in the government day cares (Centres de la Petite Enfance, or CPE’s) who work 35 hours per week but whose net pay is equal to a 55-hour week for home-based workers. Workers at CPE’s have a limited number of tasks, while home-based workers do all the cooking, cleaning, teaching, grocery shopping, administrative work and everything else that comes with taking care of children all day long. The province promised to lighten the load of administrative work, but so far these promises haven’t been kept and the workers are looking to see them in their next contract.

Karine Morisseau, a union representative for the Responsables de Services de Garde – Centrale des Syndicats Nationaux (RSG-FSSSCSN) which represents 3200 of the network’s workers, has herself managed a day care in her own home for 26 years. She says the women are tired of being devalued and that the coronavirus crisis has exacerbated their feelings of abandonment. According to Morisseau, around 250 home-based day cares represented by CSN have shut down since March, representing a potential loss of nearly 1500 day care spots. CSN represents roughly a third of the sector. Despite being essential frontline workers, who enable other essential workers to work during the pandemic, they haven’t received any wage premiums and only an insultingly minimal amount of PPE and COVID-related material support. Québec’s Healthcare Minister Christian Dubé has unveiled a plan for the expected “Second Wave” of COVID, in which day care closures are off the table.

At Montréal’s June 18 strike demonstration, Dominique Daigneault, the president of the Executive Committee of the Montréal-area CSN Council spoke to the tragic character of day care workers’ struggles in Québec. An unquestionably groundbreaking victory for Québec’s very strong feminist movement, subsidized day care survives, in a sense, on the backs of the extremely low waged, female workforce. This irony is neither accidental nor inevitable and the government is taking advantage of austerity to create a crisis in the system.

Right now, despite having a supposedly public and subsidized childcare system, many parents and caregivers cannot find a spot for their children. It’s a given that people will lose confidence in a system they pay for through taxation but cannot access. If more and more day cares close due to impossible working conditions, this will lay the groundwork for a more thorough dismantling of the childcare system.

The CSN is currently involved in wider public sector bargaining with bold, simple demands for a reinvestment in public services and an end to austerity. Day care workers with the CSN have a similar slant towards bargaining for the common good. Home-based day care workers who are represented by other trade unions are pushing for similar demands at the same bargaining table. It’s clear that a public service which serves such a direct need for such a broad swath of the population cannot be cast aside, willfully neglected into oblivion.

Feminists, labour movement activists, parents and caregivers – nearly all of society benefits from a robust public sector day care system. If COVID has taught us anything, it’s that public services are essential to our survival, but that they can’t help us if the workers running it don’t have access to the tools to make it work properly. This is a reality in Québec, with our flagship childcare program which lifts up all of society, but especially working class women.

It needs to survive. And for that, its workers need a fair deal!