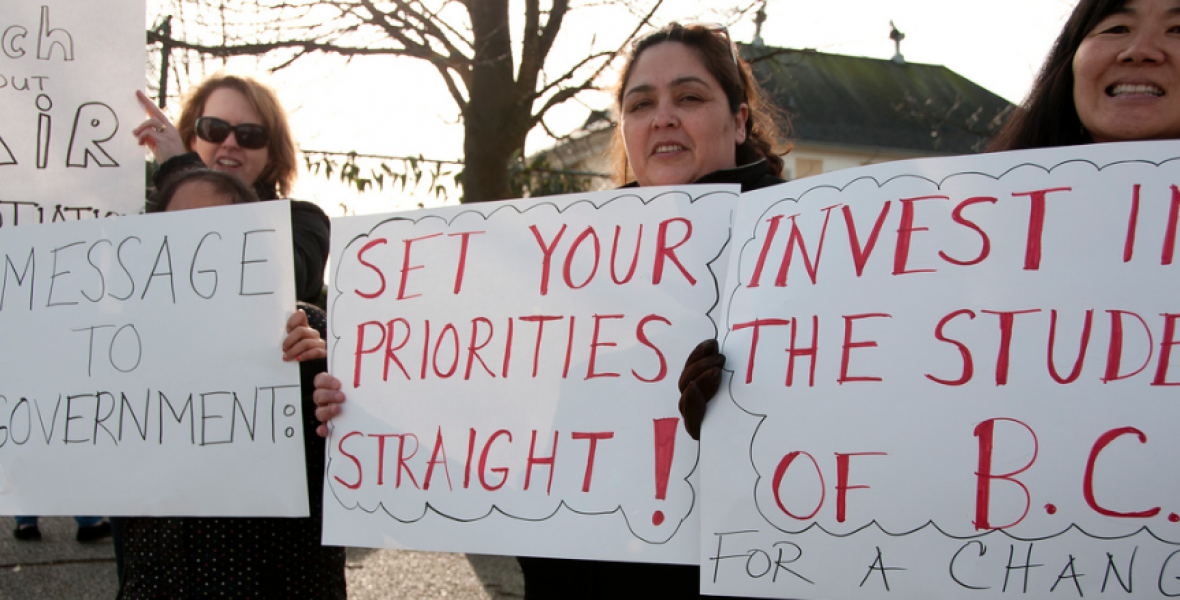 With 13 months left until the British Columbia election scheduled for October 2021, Premier John Horgan’s minority NDP government is among the most popular in Canada. But a year is an eternity in 21st century politics. Public opinion can change faster than the proverbial Canucks fans jumping off the bandwagon after a lopsided loss.

Horgan’s poll numbers are the result of several factors since the NDP took office three years ago. One is quite simple – the previous sixteen years of the BC Liberals and their relentless support for the rich at the expense of working people and social programs.

A new book by former cabinet minister George Abbott is a timely reminder of the Gordon Campbell era, when cuts to social spending in BC dwarfed the austerity attacks launched by the Harris Tories in Ontario during the mid-1990s. Usually considered a “moderate” under Campbell, Abbott explains that when the Liberals took office, they acted on the neoliberal argument that a 25 percent tax cut for millionaires and corporations would generate explosive economic growth, easily compensating for any revenue losses to the provincial treasury.

Stating the obvious, Abbott says that the tax cut caused a $4.4 billion deficit, which was covered by wholesale slashing of social programs, public education and health care. The victims were teachers, hospital workers, students and young people in dire need. Campbell’s grateful millionaires poured their new wealth into condo purchases, driving up housing prices and homelessness. British Columbia is still reeling from this disastrous austerity drive, making the NDP and their Green partners in the legislature look not so bad in comparison.

Horgan and his cabinet have also benefited from a relatively steady response to the coronavirus pandemic. They were smart to make provincial health officer Dr. Bonny Henry the main public face of the government, avoiding the temptation to hog the camera. As long as infection numbers remained lower in BC than in other large provinces, this strategy has worked well.

But now, those numbers are rising fast, and Dr. Henry warns the province is on a “precipice.” The government made things worse this summer with a series of changes around its school re-opening plans – in large part forced by the NDP’s stubborn refusal to scrap the Liberal tax cuts which still make it impossible to adequately fund real human priorities. When the re-opening was announced in July, it hardly appeared to be just a directive for school boards to start classes in September, without providing the resources necessary to ensure the safety of students and staff or to reduce class sizes.

The BC Teachers’ Federation and public education activists pushed back hard, only to meet strong resistance from Education Minister Rob Fleming, who was responsible for the government’s hardline stance in last winter’s collective bargaining with the BCTF. Under major pressure, Fleming had to be more flexible around school re-opening details like masks, physical distancing and remote learning. But this was only after his ministry was caught trying to downplay a massive screw-up of final marks for the 2019-20 academic year, negatively impacting the post-secondary applications of thousands of students.

The K-12 fall term starts on September 10, but nobody can predict how many students will be in class. School boards are in the dark about provincial funding, which is based on enrollment, and unable to guarantee teacher hirings and placements for the academic year. The recent federal announcement of extra funding for public education may eventually help address some problems, but this badly bungled process puts everyone going into classrooms at greater risk.

Another piece of grim news for Premier Horgan this summer was the revelation that the controversial Site C dam faces yet another staggering escalation in construction costs. “Geotechnical issues” may boost the megaproject costs by another $4 billion or so from the estimated $10.7 billion in 2017, a figure which was double the original guess when the dam was announced by the Campbell Liberals.

Energy Minister Bruce Ralston says that BC Hydro is undertaking a full “rebaselining” of the budget and construction schedule, but the next update on cost projections won’t be ready until “later this fall.” Ralston blames the Liberals for starting construction without an independent review of Site C by the utilities commission.

But it was the newly-elected Horgan government which angered critics of the project by moving ahead in late 2017, after failing to consult adequately with economists, engineers, Indigenous peoples and environmentalists, and despite predictions of huge cost over-runs, technical problems and construction delays. Many believed at the time that the project was mainly a way to provide affordable energy to big resource corporations in northern British Columbia, and 2200 temporary construction jobs.

George Gidora, leader of the Communist Party of BC, says the latest news reinforces the party’s call to halt “the destructive, expensive and unnecessary Site C dam project on the Peace River.” The CPBC will have several candidates on the ballot next fall.

But the government is sticking to its 2017 position, that after so much money has been spent “the taxpayers” will want to get something for their investment.

Trends such as falling global energy demand and prices indicate that this boondoggle is increasingly a sinkhole for British Columbians. The taxpayers may indeed eventually “get something” – a massive pile of concrete and dirt across the Peace River, flooding valuable farmland, and producing over-priced energy and billions of dollars in debt for BC Hydro. If that does happen, the NDP will long be remembered for wading ever deeper into the “big muddy,” despite ample warnings of a major fiasco.

It’s far too early to know if these developments will affect the outcome of the 2021 BC election, but NDP supporters have good reason to be nervous.