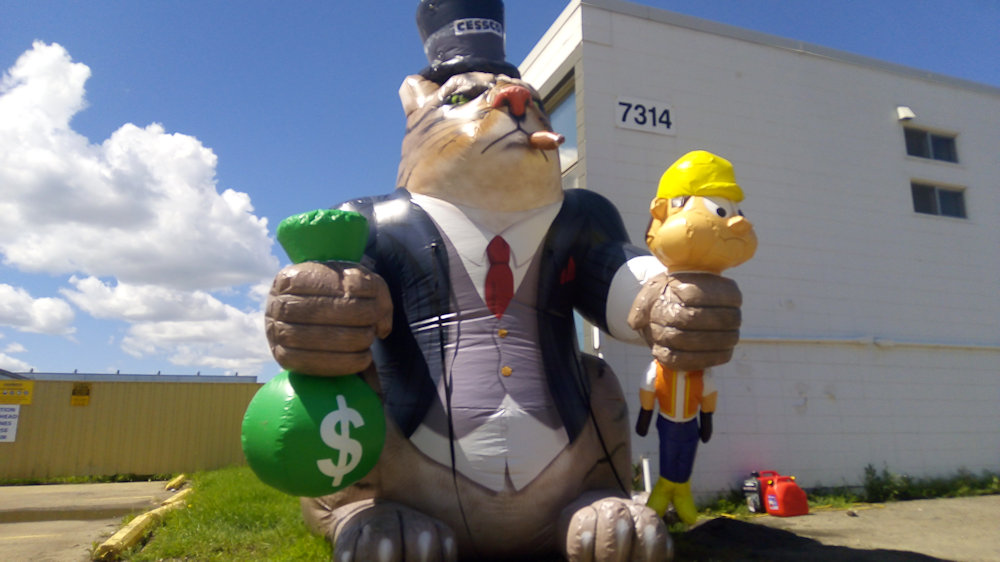 In the morning on June 25, just over 30 workers of Boilermaker Lodge 146 of Edmonton-based CESSCO Fabrication and Engineering found themselves served with a lockout notice after two and a half years of negotiations. The manufacturing company has demanded significant changes in the contract, including a ten percent cut to take-home pay, a drop in pension contributions, and the elimination of seniority clauses. Shortly after pickets went up, CESSCO began bringing in cheap replacement labour.

Although the workers in Lodge 146 have not seen a lockout or strike in over 35 years, CESSCO came under fire in 2016 for failing to ensure the proper use of safety equipment, resulting in the death of veteran welder Barry Maitland. The company was fined $5,000 and also had to pay $170,000 for the creation of an enhanced fall protection program. CESSCO, which supplies steel and metals for international clients in oilsands production, mining and other petrochemical processing, was most recently estimated to have an annual revenue of over $26 million.

Company CEO Dave Hummel told media that “the well-being of employees is the main focus of [contract] discussions,” but added that any potential agreement must “reflect the current operating and economic landscape.” While Hummel claims the company had made “every effort to achieve a successful resolution” and called its lockout of the workers “truly unfortunate,” picketers say they have not seen a significant increase in pay in over 5 years.

For over two weeks, members of Lodge 146 – along with support from several Alberta labour organizations like the Alberta Union of Provincial Employees, the United Nurses Association, the Non-Academic Staff Association of the University of Alberta, the Alberta Federation of Labour, the Union of Operating Engineers and the Bricklayers and Allied Craftworkers – have organized outside the Edmonton CESSCO plant. Each morning and afternoon, workers across several industries gather to delay the transportation of scabs to the worksite. “It’s not just about the issues workers have with the contract, it represents a lowering of the bar for other companies and industries to make workers settle for less,” noted a union member while speaking about the importance of their ability to collectively bargain.

Several public and private sector employees agree that this lockout sets a dangerous precedent in their respective negotiations with the current provincial government.

Recently enacted and proposed legislation in Alberta has produced an extremely difficult environment for picketers and workers negotiating contracts. Bill 1, The Critical Infrastructure Defence Act, passed at the end of May and has made the blocking of “essential infrastructure” – including roads, railways, utilities and highways – illegal and punishable by large fines and the possibility of up to 6 months in prison. The bill was introduced in direct response to the ongoing Wet’suwet’en land defense demonstrations and protests across Alberta. In the short time since its passing the controversial bill has raised the stakes for Albertans participating in any form of group political action.

On July 7, the UCP tabled Bill 32, The Restoring Balance in Alberta’s Workplaces Act, which will prohibit any action to block or delay the crossing of a picket line or picketing of secondary sites without explicit permission from the Labour Relations Board. Bill 32 also aims to “cut red tape” in an employer’s ability to conduct mass layoffs, cut termination notice requirements, remove provisions in the hiring of youth aged 13-14, and allow employers to more easily apply for exempt status from certain health and safety regulations on worksites. The aim of this legislation, according to Labour and Immigration Minister Jason Copping, is to tilt the balance between unions and employers back towards the employer. This corporate-friendly attempt to spur economic growth and investment comes at the price of the rights and safety of workers, eroding standards which were already considered to be the lowest in the country.

One effect these bills and others have on workers and demonstrators is to increase the looming threat of violence and hostility during any engagement in collective action. This is felt every day by Lodge 146 picketers, who are increasingly limited in their ability to demonstrate by delaying vans entering the CESSCO plant.

Labour relations are generally deteriorating in Alberta – evidenced by cuts to wages across nearly all public sector employees, which specifically target teachers and nurses. As public contracts are scrapped without negotiation, many public sector workers have begun to look for work outside of Alberta. The potential for a mass exodos has stoked fears about further isolation of rural communities.

Despite this, the action that the CESSCO workers have taken and the response garnered represent a growing trend in Alberta of greater levels of collective action across multiple sectors.

With mounting tensions between labour, both unionized and non-unionized, and the United Conservatives, cross-industry solidarity has become a more common sight in the province.

As picket organizer and Lodge 146 member Casey Worden said, “The best way to know about unionized workers and their issues is to join a picket line and speak with us and get to know us. Just regular Albertans who are fighting for their collective rights and trying to keep employment standards high.”