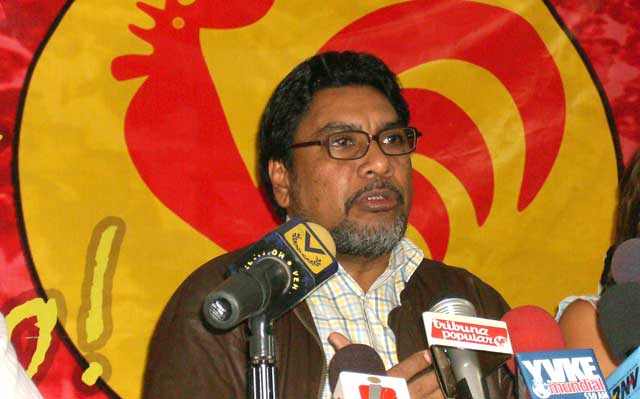 The Secretary General of the Communist Party of Venezuela (PCV), Oscar Figuera, warned that the possibility of an imperialist war threatens humanity and puts the existence of life on the planet at risk.

During a videoconference promoted by the Committee of International Solidarity and Struggle for Peace (COSI) of Venezuela on the social network Facebook, the party leader called to stop the common enemy of the peoples which is imperialism.

He stressed that an armed intervention against this South American nation would be the prelude to a war of plunder, of domination, where the cost of human lives will not matter.

“There is a general crisis of a model of domination, of the capitalist model, of the big transnationals of capital, of the model of pillage, of the industry of extermination, of the irrational exploitation of resources,” he said.

A crisis that is not new, he stressed, but it is at this moment when it is most evident, because it shows that capitalism does not care about human beings, nor about the irrational exploitation of natural resources.

During the virtual meeting, held this Sunday to celebrate World Solidarity Day with Venezuela, Figuera and other social and political activists advocated for the unity of the peoples as the only way to face the aggressions of the US and other capitalist countries.

“Unity is the fundamental axis of action on which we must concentrate, even with different approaches, we must agree on a common point, the defense of life, strengthening the resistance, the counteroffensive of the peoples against imperialism,” he said.

He stressed that the unity of all factors is the strength of the Venezuelan revolutionary process, which has allowed it to face internal and external attacks throughout these 20 years.

“In the face of the common enemy, it is necessary to achieve world, continental and national unity, to consolidate the democratizing current, the Latin American union that is being strengthened in this process of popular counteroffensive against aggression,” Figuera said before concluding his speech.