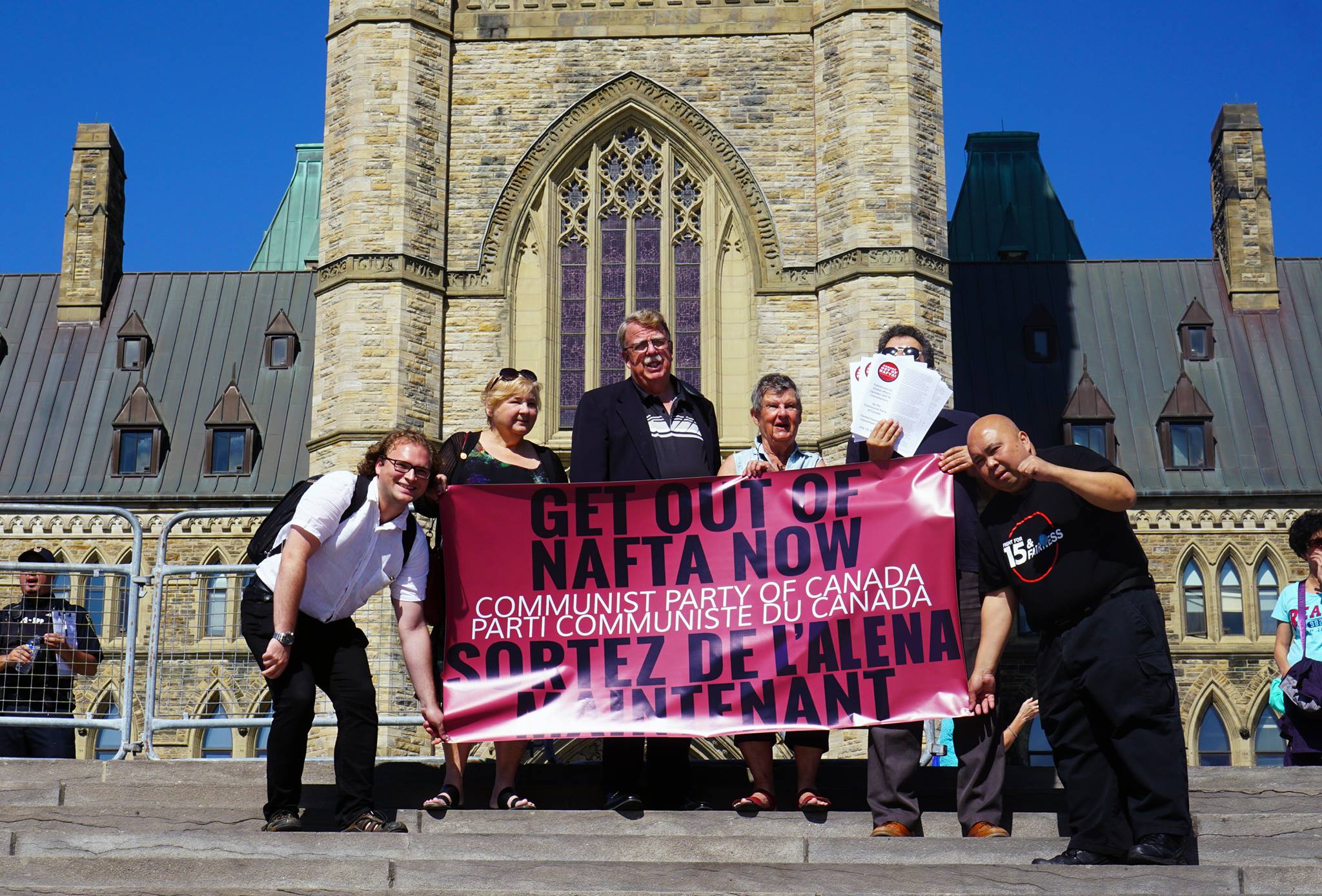 The Communist Party of Canada has issued a statement calling on Parliament to refuse to ratify the US-Canada-Mexico Agreement (USMCA) and urging the labour and democratic movements to mobilize against the deal, which is a continuation of NAFTA.

The Party calls the USMCA, NAFTA and the Canada-US Trade Agreement “examples of continental corporate constitutions that have less to do with trade and more to do with expanding corporate rights and undermining sovereignty, democracy, and labour rights, wages and standards.”

With more than 75% of its trade with the United States, the Canadian economy is especially vulnerable to US trade sanctions, tariffs and duties. For most of the 20th century, US corporate investment and ownership have dominated the country’s economy, imposing upon Canada the roles of supplier of raw materials and market for finished products.

The Communist Party notes that USMCA escalates the de-industrialization of the Canadian economy, which has seen manufacturing job losses of well over 500,000 over the past three decades of free trade deals, and warns of increasingly vicious attacks on jobs, wages and unions. “‘Right-to-work’ laws will surely follow in the wake of the USMCA deal. Alberta Premier Jason Kenney is already drafting legislation that looks remarkably like right-to-work.”

“Some in the labour movement, after three decades of massive job losses and declining wages, have lost sight of the big picture and think the USMCA is a “mixed bag” with both positives and negatives compared to NAFTA. This appears to be the NDP’s position as well which shamefully voted for the first step in Parliament’s ratification. In fact, the negatives far outweigh the positives in this new deal and the fundamental character of this agreement is the same.”

One example lies in the area of investor-state dispute settlement mechanisms (ISDS) which allowed corporations to sue governments for lost profits. USMCA boosters point to the fact that these have been removed, as proof of the “positive” side of the deal. In fact, ISDS has been replaced with other provisions that further diminish entrench corporate power and diminish sovereignty.

The USMCA will be devastating for dairy and poultry producers, whose domestic supply management market is opened up by another 3.59% share for US products, combined with restrictions on Canadian exports of cheese and milk products. This reflects a consistent attack on supply management that has largely come from US-based agribusiness, but which also reflects the interests of Canadian corporations and their think-tanks like the Canada West Foundation. This deepened corporate control is expected to have long-term impacts on health and food security.

Within days of the initial deal, which was sold to auto workers and their communities as a way to protect the auto industry, General Motors announced the closure of its Oshawa plant. This will cost 2,700 jobs in the plant, and thousands more spin-off jobs. The Communist Party considers this to be the prelude to more plant closures and the eventual departure of the “Big Three” from Canada.

USMCA also includes a “non-market economy” clause, which obliges countries to consult with one another before negotiating trade agreements – including developing mutually beneficial trade – with countries like Cuba, Vietnam, China or DPRK. This clause effectively locks Canada into an alliance with US imperialism.

As of press time, the USMCA implementation legislation, Bill C-4, has passed second reading and been sent back to committee for review. In addition to the Liberals and Conservatives, the bill received unanimous support from the NDP and Greens; only the Bloc Québecois voted against.

The Communist Party demands that this deal be rejected. “There is no reforming NAFTA-USMCA, which at its base is a corporate constitution. We call on all political parties and Members of Parliament to reject the USMCA’s ratification. Canada must get out of this agreement and other neoliberal free trade agreements such as the TPP and CETA. These deals are focused on the “right” of capital to achieve maximum profits by removing restrictions on corporate investments, driving down wages and living standards across the continent, and transforming Canada into a supplier of raw materials and a market for finished goods made elsewhere.”